The blood cells are part of the blood circulatory system. Blood is a fluid, which is pumped out by the heart, then it is circulated throughout the body and then it goes back to the heart through the process called “Circulation of blood”. It consistently flows in the circulatory system and it is also considered as a precious fluid that performs an incredible role inside the body.

Blood is in the liquid form but generally, it is thicker than the pure water due to the presence of serum proteins and blood cells. It acts as a carrier that “transports in” the dissolved gases, proteins, nutrients, enzymes etc. and “transport out” the waste products. Therefore, blood is an important part of the circulatory system, in which each component of blood plays a significant role inside the body.

The blood cells like RBCs, WBCs and Platelets function as an oxygen carrier, immunity booster and blood-clotting agent, respectively. Also, the blood plasma plays a pivotal role in maintaining the body pressure and cell homeostasis. In this context, we will discuss the definition of blood and its composition as well as the different types of blood cells.

Blood is a red colour liquid, which is typically the combination of blood plasma and blood cells. Blood plasma constitutes the liquid portion of the blood and mainly contains proteins, nutrients, glucose and other dissolved matter. Oppositely, the blood cells constitute the solid portion of the blood and contain RBCs, WBCs and platelets. The circulatory system works by the union of blood, heart and blood vessels. Therefore, blood can be defined as the precious fluid that circulates the fresh oxygen and nutrients throughout the body and passes the metabolic wastes to the kidney and liver.

Blood is composed of many cells that can be seen upon centrifugation of the blood. After centrifugation, we can see three different layers in a test tube of a distinct nature. A centrifugation technique works on the principle of centrifugal force. Therefore, the more massive particles of blood will found at the bottom as “Sediment”, and the lighter molecule will remain on the top as “Supernatant”. In this way, three layers will form as you can see in the picture given below: 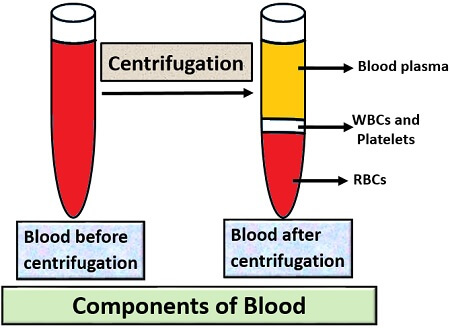 Blood cells are also termed as “Haemocytes”, which constitutes the major portion of the blood. The blood cells form through the medullary haematopoiesis stem cells, which occurs at the site of bone marrow. In blood, blood cells are of three types viz. RBCs, WBCs and Platelets. Each of the blood cells performs a fundamental role inside the body, which we will discuss further in the types of blood cells.

These are also called “Erythrocytes”. Its size is smaller than the other cells (7µm). Its shape is disc-shaped and bi-concave. It lacks a nucleus, due to which it is called “Anucleated cells”. The normal RBC count is about 2.4 million. RBCs have a lifespan of 120days. After the completion of their lifespan or when it becomes old, it is removed out of the circulatory system by the specialized cells (Macrophages) in the spleen. The red colouration of the RBCs is due to the pigment termed as “haemoglobin”. Its production is regulated by the erythropoietin hormone released by the kidney. 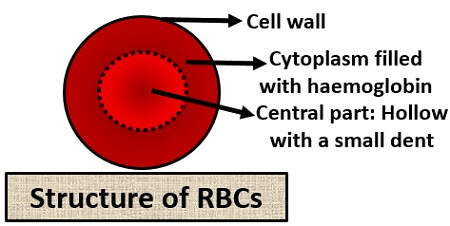 Functions of RBCs: It contains haemoglobin that carries oxygen and collects carbon dioxide. As a nucleus is absent in RBCs, it provides more surface area for the haemoglobin, which in turn can transport more oxygen into the body. So basically, it has two mains functions:

These are also called “leukocytes”. It exists in variable size but is larger than the RBCs. Its shape is irregular. WBCs contain a nucleus, due to which these are called “Nucleated cells”. It constitutes about 1% of the blood. The normal WBC count is about 4 X 109/L – 1.1 X 1010/L. WBCs can be subdivided into the granular and agranular cells based on the presence of a nucleus. Depending upon the physical and functional properties, the WBCs can be categorized into the following types that are shown in the diagram.

These are also called “Thrombocytes”. The shape of the platelet is irregular. Its diameter is about 2-3 µm. It also lacks nucleus or these are considered as “Anucleated cells”. The average platelet count is 150-450 X 109 /L. Its formation is regulated by the thrombopoietin hormone that is produced by the kidney and liver. Like the other cells, platelets also remove out from the bone marrow by the phagocytosis. It has 5-9 days of lifespan. 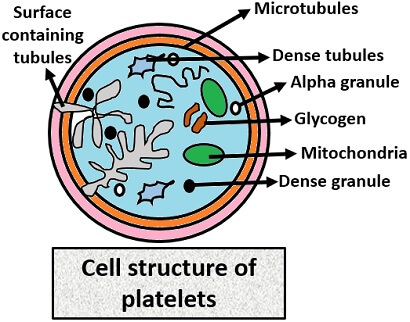