To study the growth curve of bacteria, there are some important measures that we must keep in mind: 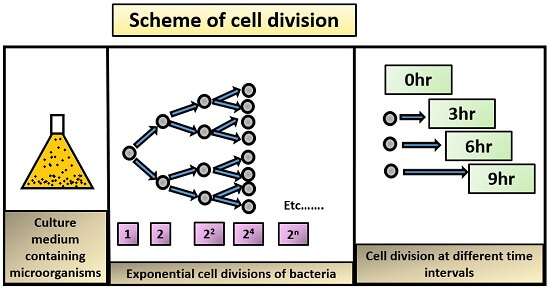 In this context, we will discuss the growth of bacteria and the mathematics behind the bacterial generation, along with the different growth phases of bacteria.

Growth of Bacteria by Binary Fission

Binary fission is a type of vegetative reproduction, which predominantly occurs in bacteria and involves the following steps:

The growth pattern of bacteria is in a geometric fashion, i.e. a bacterial cell first divides into two, then four, then six, and so on ( x, x2,x4,x6……xn). Here, n indicates the number of generations. 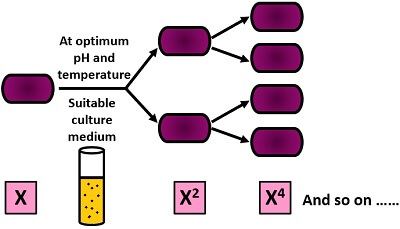 Generation time: It represents the total time that is required by the bacteria to double its population. ‘g’ is an acronym for the term generation time. Mathematically, it is expressed as:
g =t/n

Growth rate: It defines the number of generations of bacteria per hour. ‘R’ is an acronym for the term growth rate. Mathematically, it is expressed as:
R=n/t

Phases of the Growth Curve 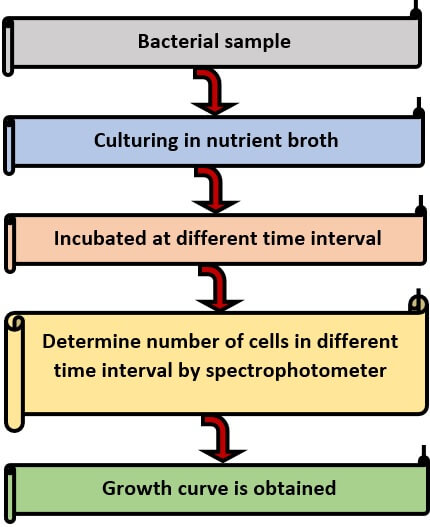 There are distinct four phases in the growth curve of bacteria.

This phase is also called as “Exponential or Logarithmic phase”. This phase shows an intense metabolic activity of microorganisms due to the production of primary metabolites. These metabolites enhance the growth rate, i.e. an increase in cell number as well as cell size. It is a period of rapid growth. In this phase, microorganisms are resistant to adverse conditions:

It is also called the “Stagnant phase”. During this phase, population size is in a state of equilibrium. Cell division begins to slow down. Overall, there is no increase in cell number and cell mass. Factors that slow down the process of cell division can be due to the following:

This phase also refers to the “Decline phase”, which is the last stage of the growth curve. In this, the population size decreases at the logarithmic rate. The death phase is characterized by the loosing of the cell division ability of microorganisms.