Chemical mutagens refer to the chemical agents that impose severe genetic abnormalities by directly or indirectly interacting with the DNA. DNA damage and alternations in nucleotide sequence prevalently result, after the treatment of nucleobases with base analogues and base altering agents.

They alter the DNA chemistry by replacing the normal base pairs of the DNA with the abnormal bases. Chemical mutagens induce chemical mutation in the gene sequence and structural moiety of DNA.

Chemical mutagens refer to the group of naturally occurring and synthetic chemicals, which cause chemical mutation in the DNA by modifying the chemical composition and structure of DNA. They generally induce errors in DNA replication machinery, gene transcription and translation mechanisms. They induce mutations in several ways:

There are three kinds of chemical mutagenic agents, depending upon how they interact with DNA.

Base analogues incorporate within the nucleotide base sequence during the time of DNA replication. These resemble the original bases of DNA, thereby substituting the original base with synthetic chemicals like 5-bromouracil, 2-aminopurine, 6-mercaptopurine etc.

They cause alternations in base pairing and DNA structure, affecting DNA replication and gene expression. They pair with the corresponding bases in the DNA double helix and eventually induce point mutation by causing the insertion of wrong nucleotide bases during DNA replication.

Examples of Base Analogues

Let us take few examples to understand the mechanism of base analogue and alternations caused after its incorporation.

5-bromouracil is a common example of base analogue, which show analogy with nitrogenous bases like thymine and cytosine. 5-bromouracil is a brominated derivative of uracil. It exists in two states; one is normal keto-form, i.e. thymine, and the other is rare enol form, i.e. cytosine. 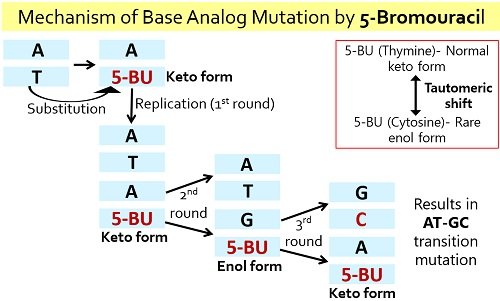 Similarly, 2-aminopurine is another example of base analogue, which show analogy with nitrogenous bases like adenine and guanine. 2-aminopurine is a chemical derivative that possesses purine core and amino substituent at the 2nd position. It exists in two states; one is a normal amino-form, i.e. adenine, and the other is a rare imino form, i.e. guanine. 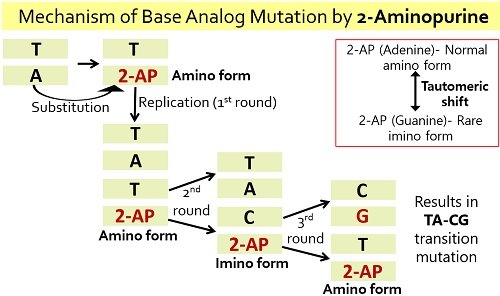 Thus, the base analogues show tautomerism, i.e. they exist in two interconvertible forms. They cause AT→GC and GC→AT type of transition mutations.

They refer to the chemicals that do not incorporate within the DNA but alter the base-pairing properties and the structural moiety of the nucleobases. Base modifying agents change the specificity of H-bonding between the nitrogenous bases.

These occur in bases those possess exocyclic amino group in an order adenine, cytosine and guanine. A common deaminating agent, i.e. nitrous acid (HNO2), replaces an -NH2 or amino group with an –OH or ether group, thereby altering the DNA bare pairing.

In simple words, deaminating agents convert the amino group of the bases into keto acids through oxidative deamination. They remove the functional amine group from the nucleobases. Nitrous acid induces the following changes: 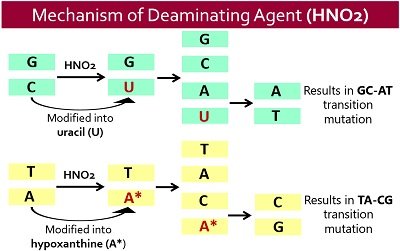 They hydroxylate the C-4 nitrogen of cytosine. Hydroxylamine or NH2OH modifies cytosine into hydroxycytosine by adding OH. Then, hydroxycytosine pairs with adenine instead of guanine and causes GC→AT type of transition mutations. This base pair mutation does not revert by a second treatment with hydroxylamine. 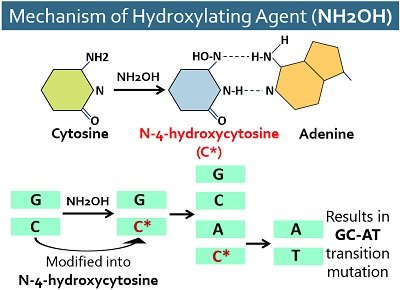 These chemicals add the alkyl group to the oxygen of guanine (at N7 position) and adenine (at N3 position). Chemicals like dimethyl sulphate and ethyl methane sulphonate are the alkylating agents.

Then, the alkyl group increases ionization of nucleobases, resulting in base-pairing errors that eventually leading to depurination or gaps in the DNA polynucleotide. Ethyl methane sulphonate or EMS possesses high specificity to remove G, and C. EMS alkylates guanine into O6-ethylguanine.

In 2nd round of replication, a gap is filled. Insertion of the correct base does not alter the normal DNA sequence. Conversely, the insertion of incorrect bases causes transversion or transition mutation.

These include acridine dyes, proflavin, and ethidium bromide etc., that possess a hydrophobic heterocyclic ring. They bind with the DNA major and minor grooves. Intercalating agents also mimic the nucleobases and intercalate between the DNA nucleotide bases. 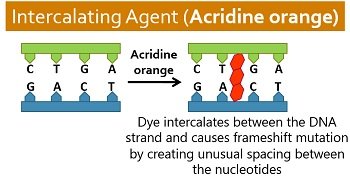 It results in atypical spacing between the nucleotides and distorts the DNA helix. The unusual spacing in the DNA helix causes the insertion or deletion of bases in a growing DNA chain.

As a result, the normal reading frame of the bases changes, thereby causing frameshift mutation and ultimately leading to aberrant DNA replication and transcription.

Therefore, the interaction of chemical mutagens (include natural and synthetic chemicals) induce chemical mutagenesis by causing genetic changes in the gene sequence and DNA structure.