Methyl red test differentiates whether a test organism can undergo mixed acid fermentation or not by allocating adequate glucose. Organisms that can ferment glucose will give a positive MR test by producing a large amount of acid, while some organisms give a negative MR test.

MR-test also helps to identifying and categorizing the different genera of Enteric bacteria based on glucose fermentation. In simple words, the methyl red test checks the amount of acid formed by an organism after the glucose fermentation. Due to the acid production, the pH of the media falls from 6.9 to 4.5.

We could see or identify the acid formation by adding a methyl red pH indicator. If a test organism in the media causes the fermentation of glucose, then methyl red solution will impart a red colour to it. This lesson describes the definition, principle, procedure and result of the methyl red test. Besides that, you would get to know the composition of test media and test reagent and some important points to remember.

Methyl red test sometimes abbreviated as MR-test. It is one of the procedures of a biochemical analysis (IMViC-test), in which ‘M’ is an acronym for the “Methyl red test”. It refers to a quantitative test that is confirmed by the appearance of red colour in the media, depending upon the amount of acid production.

Things to Keep in Mind

Before jumping into the theory of the methyl red test, we must know the basic things. On studying the MR test, we will go through the following terms that we should keep in mind:

Methyl red is an acidic pH indicator, which contains p-dimethylaminoaeobenzene-O-carboxylic acid that quantifies the H+ ion concentration in the media. If the test media includes a sufficient amount of acids, then the methyl red gives off red colour. The media will remain yellow even by adding a methyl red indicator and indicates no acid formation.

MRVP broth serves as a standard media to perform the Methyl red and Voges Proskauer test. It is supplemented with glucose, and the test organisms exploit the glucose content to carry out anaerobic fermentation or mixed acid fermentation to form a variety of end products.

Methyl red test uses MRVP broth that provides an adequate glucose supply. The fermentative enteric bacteria cause the conversion of glucose into pyruvic acid through their complex enzyme system. 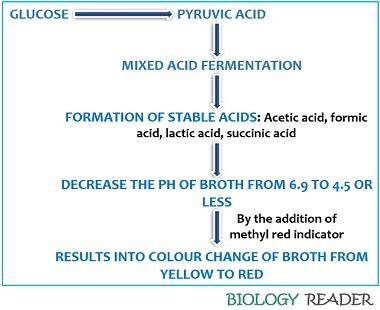 The production of stable acids falls down the pH to 4.5 or below. The decrease in pH will ultimately result in a colour change of MRVP broth from yellow to red, which we could observe by adding a methyl red indicator.

The procedure of MR Test

The protocol of the methyl red test includes the following steps: 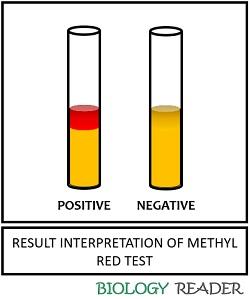