Watson and Crick model of DNA provides one of the best ways to demonstrate the structure of double-helix DNA. A DNA is a polymer composed by the combination of several monomer units (deoxyribonucleotides) linked by the phosphodiester bond. In the discovery of DNA, many scientists have contextualized the structure of DNA, its components and composition etc.

Watson and Crick’s demonstrated a model, which explains all the physical and chemical features of the DNA. Before Watson and Crick, Friedrick Miescher, P. A. Levene, W.T. Astbury, Maurice Wilkins and Rosalind Franklin were the scientists who helped Watson and Crick to further study the DNA structure.

Watson and Crick’s model is the most successful model of DNA for which they have won the Noble Price in Physiology and Medicine in 1962 which they shared with Maurice Wilkins, but not with the Rosalind Franklin due to her unfortunate death in 1958.

A Swiss physiological chemist “Freidrich Miescher” identified something in the nuclei of the WBCs, which he termed it as “Nuclein”. Today, the term nuclein refers to a nucleic acid such as deoxyribonucleic acid.

Phoebus Aaron Theodore Levene (an American organic chemist) discovered the elemental composition of nucleic acid. He explained one approach which is universally known as “Tetranucleotide hypothesis” according to which the base composition of all the four nitrogenous bases, i.e. A, T, G and C will be same.

An Austro-Hungarian biochemist, Erwin Chargaff has demonstrated the “Biochemistry of DNA” by giving two approaches. Firstly, the sum of purines and the sum of pyrimidines will be equal in the DNA. Secondly, Erwin Chargaff concluded that the DNA composition varies between the different species. These two postulates commonly refer to the “Chargaff’s Rule”.

Two scientists, James Watson (an American molecular biologist, geneticist and zoologist) along with Francis Crick (a British molecular biologist, biophysicist and neurologist) have demonstrated the double-helical structure of DNA. James Watson and Francis Crick collaborated with the Maurice Wilkins and Rosalind Franklin to introduce the DNA model. The model explained by Watson and Crick is considered to be the best model. Watson and Crick gain a lot of attention and appreciation for their work in the discovery of the DNA double-helical structure. They won Nobel Prize for their contribution in the year 1962 which they shared with the Wilkins.

Structure of DNA by Watson and Crick 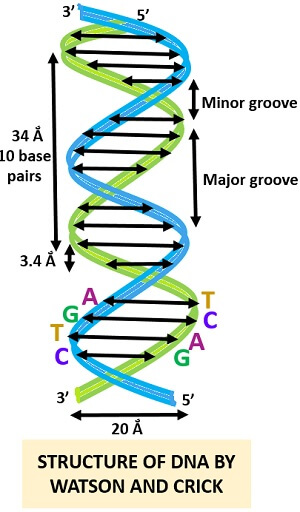 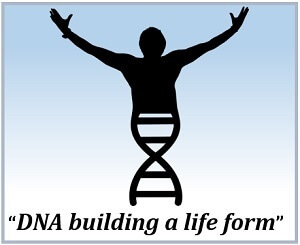 The DNA is the largest biomolecule which contains all the genetic information of the person to build an organism or a life form. The study of DNA double-helical structure helps us to know about the chemical and physical properties of DNA, apart from the property of DNA being a “Genetic material”.

2 thoughts on “Watson and Crick Model of DNA”