Chlamydia is an obligate intracellular parasite that functions as a “Large virus”. Chlamydias are entirely dependent on the host cells for energy metabolism, like viruses. However, they are true bacteria and differ from viruses by many ways.

In this context, we will study the meaning, features, some unique properties and taxonomy of the genus Chlamydia. Also, the life cycle, pathogenicity, diagnosis, treatment and significance of all the strains of chlamydia have been explained.

Chlamydiae contribute to the small group of gram-negative bacteria, which go through a complex life-cycle or different phases during their intracellular multiplication. They have a variety of metabolically active enzymes. Many antimicrobial drugs may inhibit their growth. Chlamydiae reproduce via binary fission and complete their biphasic developmental cycle within 40-60 hours.

Chlamydiae share some of the unique attributes that make them different from the other gram-negative bacteria.

Based on the pathogenicity and clinical symptoms, there are two ecological groups of chlamydia. 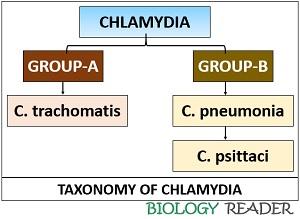 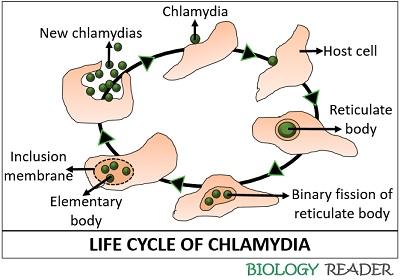 Stages of Growth and Multiplication

Chlamydia goes through a series of developmental stages, as summarized below: 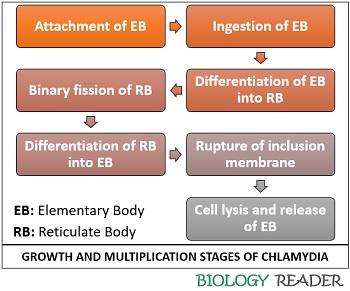 A person diagnosed with infections by the Chlamydia strains needs to be tested by the following serological tests:

The diseases caused by chlamydiae are relatively easy to treat but have two problems:

C trachomatis, C. psittaci and C. pneumoniae are the only species of the genus chlamydia recognized so far. C trachomatis is the causative agent of two prevalent human diseases; the genitourinary tract disease (Lymphogranuloma venerum) and the conjunctivitis infection (trachoma).

C. psittaci causes psittacosis disease in birds, which occasionally transmitted to humans and caused pneumonia-like symptoms. C. pneumoniae is the causal organism associated with a variety of respiratory syndromes in humans.