Hershey and Chase experiment give practical evidence in the year 1952 of DNA as genetic material using radioactive bacteriophage. Griffith also explained the transformation in bacteria and concluded that the protein factor imparts virulence to the rough strain, but it was not proved to be genetic material.

Avery, Macleod and McCarthy further studied the Griffith experiment and concluded that the DNA was the genetic material responsible for transforming the avirulent rough strain to the virulent strain. To resolve the query of genetic material, many researchers were engaged to know whether the cause of inheritance is protein or DNA.

Definition of Hershey and Chase Experiment

Hershey and Chase’s experiment has demonstrated the DNA is the genetic material where they have taken the radioactive T2-bacteriophage (Viruses that infect E.coli bacteria). T2-bacteriophage or Enterobacteria phage T2 belongs to the Group-I bacteriophage. 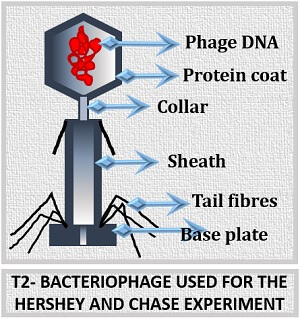 In the Hershey and Chase Experiment, the phage DNA and protein were labelled with radioactive phosphorus (P32) and radioactive sulphur (S35), respectively to know whether phage DNA or protein will infect the E.coli. After labelling the Phage DNA and protein, Hershey and Chase performed a series of experiments like infection, blending and centrifugation. 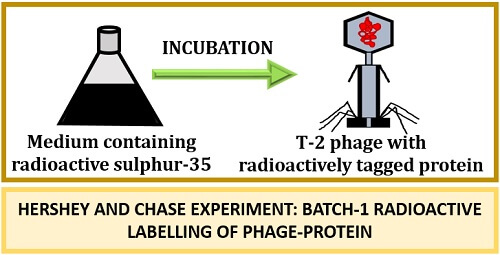 Conversely, the labelling of phage DNA by P32 is because phosphorus constitutes the backbone of DNA so it will tag the Phage DNA, not the phage protein. 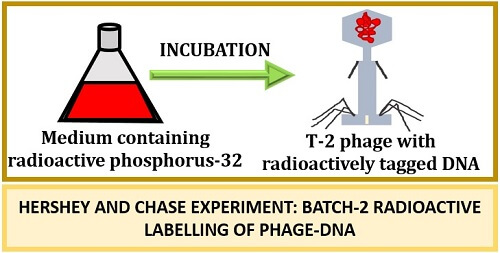 After radioactive labelling of the phage DNA and protein, Hershey and Chase infected the bacteria, i.e. E.coli by using the radioactively labelled T-2 phage. In batch-1, T-2 phage tagged with S35 and in batch-2 T-2 phage labelled with P32 were allowed to infect the bacterial cells of E.coli.

After the attachment of  T-2 bacteriophage to the E.coli, the phage DNA will enter the cytoplasm of E.coli. The phage DNA will take up the host cell machinery. Degradation of the bacterial genome occurs by the T2-phages where they use the ribosomes to form structural proteins of the capsid, tail fibres, base plate etc. 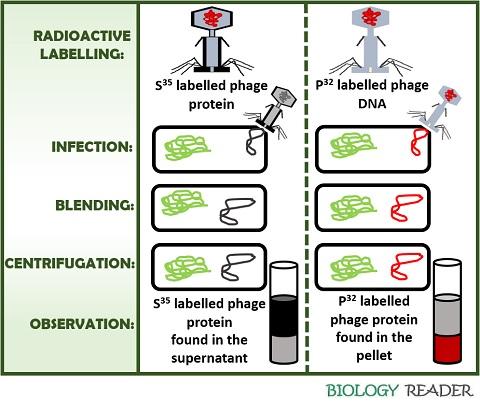 After the centrifugation, we could observe the results to identify the heritable factor. The phage DNA labelled with P32 will transfer the radioactivity in the host cell. Thus, the radioactive P32 enters a bacterial cell and exists in the form of “Pellets”. The phage protein tagged with S35 will not transfer its radioactivity in the host cell. As a result, radioactive S35 will appear in the form of  “Supernatant” in the solution.