Thus, the electrons move to and fro within the photosystem by following a cyclic path. The organisms undergoing cyclic photosynthesis restore electron supply, due to which reduction of NADP does not occur. It does not require water hydrolysis to replenish electron loss.

It refers to the light reaction of the photosynthetic process, which predominately occurs in green plants and algae. Noncyclic photophosphorylation involves both the photosystems, i.e. PS-I (P700) and PS-II (P680). It is termed noncyclic due to the zig-zag flow of electrons.

The organisms undergoing noncyclic photosynthesis synthesize ATP via PS-II. Concurrently, PS-I releases electrons that the PS-I captures to reduce NADP into NADPH. It requires water hydrolysis to replenish electron loss by the PS-II. Oxygen is produced as a byproduct through the oxidation of water. 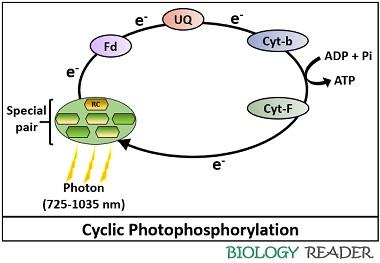 Then, the excited electrons pass through many cofactors and protein complexes in the ETS and finally return to the final electron acceptor, i.e. photosystem-I. As photosystem II is not used during cyclic photophosphorylation, no oxygen is produced.

It requires both PS-I and PS-II. Generally, noncyclic photophosphorylation predominantly occurs in all green plants, algae, and cyanobacteria. PS-II (P680) captures photons from the light source and later transfers them to the RC chlorophyll.

The RC chlorophyll excites electrons from a ground state to a higher energy level. Then, the primary electron acceptor receives the e–. Afterwards, excited electrons travel through the cytochrome b6f complex to PS-I (P700) via ETS.

During this transfer of electrons, photosynthetic cells utilize energy to transport proton molecules (H+) across the thylakoid membrane into the thylakoid lumen. Then, plastoquinone accepts protons.

The movement of proton ions across the membrane creates a potential difference between the thylakoid lumen and the chloroplast stroma. The potential difference generates a proton-motive force, which a cell uses to drive free energy, i.e. ATP via an enzyme complex (ATP synthase). 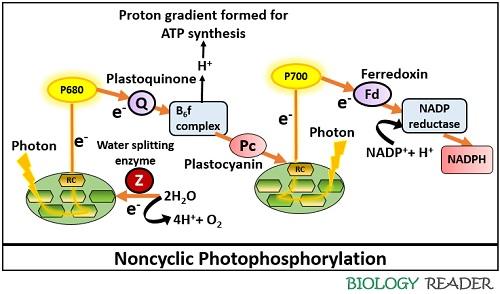 Photosynthetic cells use ATP to transport H+ ions from the lumen to the stroma. Then, the electrons reach PS-I through plastocyanin to fulfil the electron deficiency of the RC chlorophyll. Electrons pass through the cofactor ferredoxin to the enzyme complex NADP+ reductase. The electrons and H+ ions pass the NADP+ complex to form NADPH.

Then, the NADPH (reducing agent) and ATP are transported to the Calvin cycle to fix carbon dioxide into triose sugars. Both react with glycerate 3-phosphate to form a triose sugar glyceraldehyde 3-phosphate. G 3-P is the basic building block from which plants can make a variety of substances. Noncyclic photosynthetic liberates molecular oxygen along with the energy molecules (ATP and NADPH).