By the complete hydrolysis of citrate, an alkaline product (sodium carbonate) forms that cause alkalinity in the medium. As a result, the colour of the media turns blue from green due to the pH shift of the bromothymol indicator (from 6.9 to more than 7.5).

This test is based on the production of an enzyme citrase, which provides energy to the microorganisms in splitting the carbon-containing compound (citrate).

The organisms also get energy by the degradation of a nitrogen-containing ammonium salt present in the media. In this context, we will discuss the definition, test media, principle, procedure and result interpretation of the citrate utilization test.

The citrate utilization test is a part of the IMViC test procedure or a standard method for identifying and classifying Enteric bacteria based on their tendency to produce an enzyme citrase that splits sodium citrate into pyruvate. The test organisms in the citrate utilization test exploit energy in the form of carbon and nitrogen from the sources like sodium citrate and inorganic ammonium salts, respectively.

Citrate is an organic acid, which hydrolysis ultimately results in the production of alkaline carbonates or bicarbonates. Simmons citrate agar is a media used to detect whether the test organism can exploit citrate or not. The citrate metabolism involves subsequent chemical reactions. 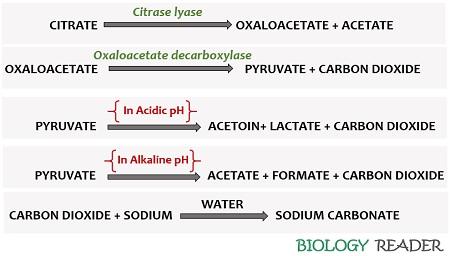 First, an enzyme “Citrase lyase” catalyzes the hydrolysis of sodium citrate into oxaloacetate and acetate. Then, the enzyme “oxaloacetate decarboxylase” causes decarboxylation of oxaloacetate into pyruvate and carbon dioxide.

In acidic pH, pyruvate further breaks down into acetoin, lactate and CO2. In alkaline pH, pyruvate splits into acetate, formate and CO2. The released CO2 binds with the sodium ions of the media to form sodium carbonate.

The test organism makes use of nitrogen from the ammonium salts present within the media. The metabolism of ammonium salts by the microorganisms yields ammonia, which later combines with H2O to form ammonium hydroxide.

Compounds like sodium carbonate and ammonium hydroxide cause alkalinity in the media. As a result, the pH indicator (bromothymol) changes its colour from green to blue due to the change of pH from 6.9 to more than 7.5. In neutral pH, the colour of the bromothymol indicator appears deep green coloured but seems deep Prussian blue as the pH rises.

A protocol for the citrate utilization test includes the following steps: 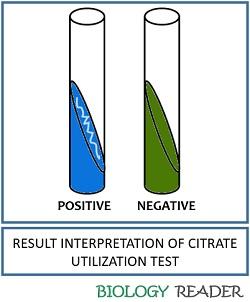 Negative result: There will be no bacterial growth and no colour change in the test media.
Examples: Escherichia sp, Yersinia sp, Shigella sp etc.