General properties of enzyme include all the characteristics (physical and chemical), through which we could define the physical and chemical nature of an enzyme. Enzymes act like a functional biocatalyst that only cause catalysis of distinct substrates into particular products and allow the reaction to occur at an increased rate without being consumed.

Thus, the enzyme’s primary function is to accelerate the reaction rate. Enzymes neither affect the nature of products formed nor undergo any changes by the reaction catalyzed. Only the active site of an enzyme goes through certain conformational changes during the substrate binding.

Upon reaction catalysis, an enzyme turns back to its original form and becomes available to participate in the new biochemical reactions. In this post, we will discuss the reasons why enzymes are considered biocatalysts along with the enzyme’s general properties. You could also learn the physical and chemical nature of an enzyme in this context.

Wilhelm Kuhne introduced the term enzyme in 1878. Enzymes are biomolecules that are highly specific. All metabolic processes in our body need enzymes to catalyze reaction at a faster rate. Enzymes are naturally produced by living cells, unlike catalysts.

The enzyme’s activity decreases remarkably under high heat. The majority of enzymes are globular proteins, while some RNA molecules. Enzymes are larger than substrates. Enzymes reside within the protoplasm as hydrophilic colloids.

Apoenzyme constitutes the enzyme’s inactive protein portion. Conversely, coenzymes (organic molecules) and cofactors (inorganic ions) make up the inactive, non-protein component of an enzyme. Thus, the main difference between cofactor and coenzyme is the chemical nature. When united, both form the catalytically active holoenzyme (complete enzyme). 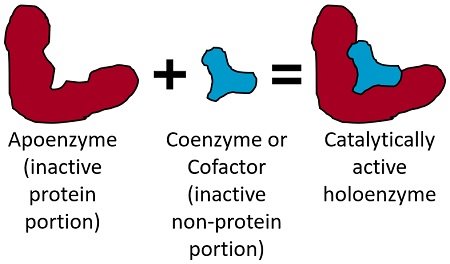 Enzyme tends to attain a shape complementary to the transition state structure. Therefore, specificity is due to the structural relativeness between enzyme and substrate.

Reasons that why enzymes are regarded as “Biocatalysts” are as follows:

The general properties of enzyme include the following characteristics:

We will study the following physical characteristics of enzyme, mentioned in a figure below.

Enzymes serve as a biocatalyst, and the reasons we have discussed earlier in this post.

On the other hand, a higher concentration of enzyme will result in faster enzymatic activity, as more substrates will interact with the enzyme’s active site to bring product formation.

Once the reaction velocity reaches a maximum value, there would not be any changes in the enzymatic reaction even after the addition of enzyme and substrate.

Enzymes behave as colloids due to their large size or high molecular weight. As a result, the enzymes have a little or no tendency to dialyze or cross the semi-permeable membrane.

Coenzymes are the inactive non-protein component that has a low molecular weight and highly dialyzable.

Acidic and alkaline solution can cause enzyme precipitation, as the enzymes are amphoteric (possess amino and carboxylic acid group towards the end of the chain). Ethanol and a high concentration of inorganic salts like ammonium sulphate facilitate enzyme precipitation.

Enzymes are soluble in water, NaCl, diluted glycerol and alcohol.

High heat (above 40 degrees Celsius) and alternations in the pH (too low and too high), heavy metals, and high salt concentration etc., denatures the enzyme by breaking the intra and inter-molecular noncovalent bonds. It distorts the enzyme’s shape and active site and finally results in the loss of enzyme activity.

We will study the following chemical features of an enzyme, mentioned in a figure below. 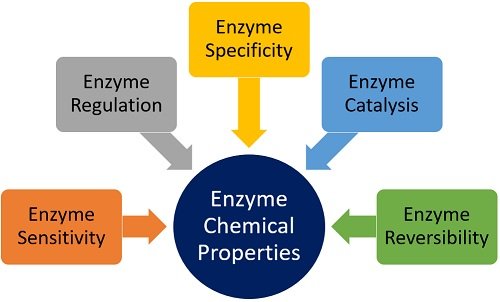 Enzymes are biological catalysts, which possess high catalytic efficiency. They can transform about 100-10,000 substrates/second. The reactions catalyzed by the enzymes show 103-108 times faster reaction rate in comparison to the uncatalyzed reaction.

Enzymes do not cause alternations in the equilibrium constant and increase the conversion rate. The number of substrate molecule gives the product is called the turn over number.

The enzyme function can be regulated allosterically. Other than the enzyme’s active site, there is another site, to which a regulatory molecule binds.

A regulatory molecule may function as an activator or inhibitor. It binds to the region called the allosteric site. Enzymes that need metabolic regulators are called allosteric enzymes.

The allosteric inhibitor binds to an enzyme’s active site can cause slight alternations in its shape that restrict substrate-binding. On the other hand, allosteric activators increase the function or efficiency of an enzyme.

Temperature above 37.5 degrees Celsius and any alternations in the pH may not only reduce the effectiveness of the enzyme but also results in enzyme denaturation. As a result of denaturation, the intra and intermolecular bonds between the enzyme molecules break.

Enzymes are the biomolecules that catalyze various metabolic reactions, including catabolic and anabolic reactions. In simple words, an enzyme can synthesize (build up new molecules or products) and decompose or break down the different products.

The majority of the enzymatic reactions are reversible, which means an enzyme can catalyze biochemical reactions in a forward and reverse direction. Digestive enzymes catalyze reactions in one way.