Voges Proskauer test depends upon the formation of a neutral end product “Acetoin” in the MRVP media, which directly relies on the breakdown of glucose into an intermediate product, pyruvic acid. The pyruvic acid enters the butylene glycol pathway and produces an end product named acetyl methyl carbinol or acetoin.

It is named after the contribution of the two bacteriologists named Voges and Proskauer, who first observed the formation of red-pink colour in the media after the incorporation of potassium hydroxide.

Later, Harden studied the reason for the colour change and concluded that the colour changed due to acetoin formation. In 1936, Baritt used two reagents (KOH and α-naphthol) to perform the VP test.

Both α-naphthol and KOH are now being very popular and named as Baritt’s-I and Baritt’s-II reagent. Further, two more scientists (Barry and Feeney) pioneered a rapid method of VP test by using creatine reagent.

Voges Proskauer test ascertains the organism’s potential to form a neutral end product “Acetyl methyl carbinol” by supplying enough glucose. It makes the use of standard media (MRVP broth) and two reagents (KOH and α-naphthol). It is also abbreviated as the VP test.

A VP positive organisms generally exploit glucose and degrade it into a metabolic product (pyruvic acid) by following the EMP pathway. Then, the test organisms further split the pyruvic acid into AMC or acetoin once it enters the butylene glycol pathway. 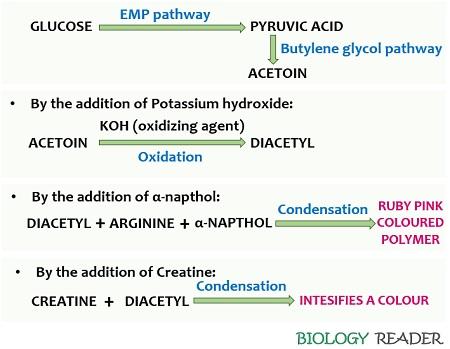 Potassium hydroxide will react with acetoin to form a compound named Diacetyl. On further treatment, diacetyl condenses with the α-naphthol and the guanidine containing compounds to give a ruby pink colour to the media. Creatine contains a free –NH2 group that condenses with diacetyl to intensify the colour of a product formed.

The composition of VP-II reagent or “Barrit’s reagent-II” includes potassium hydroxide as an oxidizing reagent. To prepare 40% of KOH solution, we require:

Nowadays, creatine reagent serves as a colour intensifier and to prepare 0.5% of creatine, we require:

The procedure of the VP test includes the following steps: 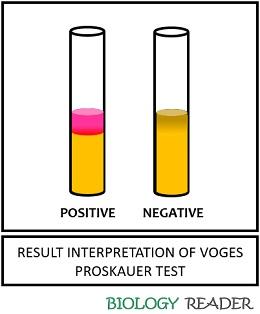 Therefore, the Voges Proskauer test differentiates the two major types of anaerobic enteric bacteria based on the production of a neutral product, and it is performed alongside the methyl red test.