Cytoplasmic inheritance also termed as maternal inheritance or maternal effect. A cytoplasm comprises some autonomous organelles like mitochondria and plastids that possess their own genetic material. Mitochondria is present in both animal and plant cell, whereas plastids are only found in the plant cell. As we know, nucleic acids like DNA and RNA are responsible for the inheritance of the genes.

DNA inherits genes from one generation to the next generation among different individuals. Therefore, the genes play an important role in forwarding the parents’ genetic features to the offsprings. On further study of inheritance, the idea of cytoplasmic inheritance has been originated. 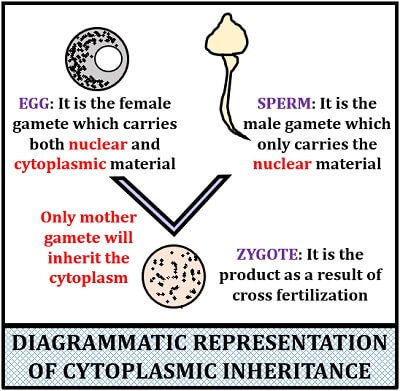 After the cross-fertilization, a zygote forms and whatever cytoplasm is coming to the zygote is only due to the female gamete. You will get to know the definition, characteristics and a few examples of the cytoplasmic inheritance In this context.

Cytoplasmic inheritance can define as one of the types of inheritance where the genetic characters are passed on to the next generation utilizing cytoplasmic elements in the organisms like animals and plants. The cytoplasm consists of autonomous organelles like mitochondria and plastids that possess DNA.

To understand the concept of kappa particle inheritance, let us cross a pure killer and sensitive strain. The pure killer strain will possess both dominant genes, i.e. KK plus a protein factor Paramycin. The pure sensitive strain will only have the recessive gene. During crossing over, there will be conjugation between KK gene with kk gene. If the duration of conjugation is less than 3 minutes, only the nuclear exchange will occur. 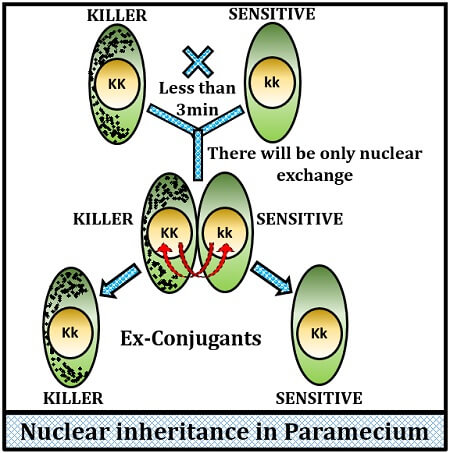 Now, let us understand the concept of nucleoplasmic inheritance by the same crossing over. If the conjugation duration (between KK and kk gene) lasts more than 3 minutes, then the nuclear exchange will occur along with cytoplasmic exchange. During crossing over, one dominant and one recessive gene will be exchanged along with the cytoplasmic exchange and called nucleoplasmic inheritance. After crossing over, two offsprings will be produced called ex-conjugants. Both killer strain will produce as a result of this crossing over. 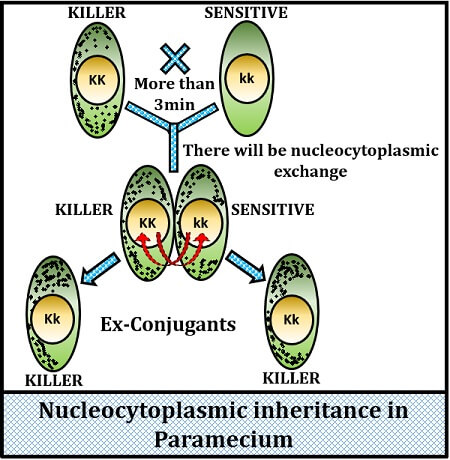 L. Heritier and Teissier then further studied the sensitivity factor where they found the virus-like particles in the cells of sensitive flies and named it as sigma particle. L. Heritier and Teissier concluded that the sensitivity in Drosophila is due to the presence of sigma factor. Sigma particle is present in different strains of Drosophila. Sigma has a particle size of 0.07-micron diameter, and it is heritable due to the presence of DNA.
Examples of sensitive drosophila strains: D. melanogaster, D. Algonquin, D. pseudoobscura, D. robusta, D. affinis etc.

Crossing over between DD female and dd male 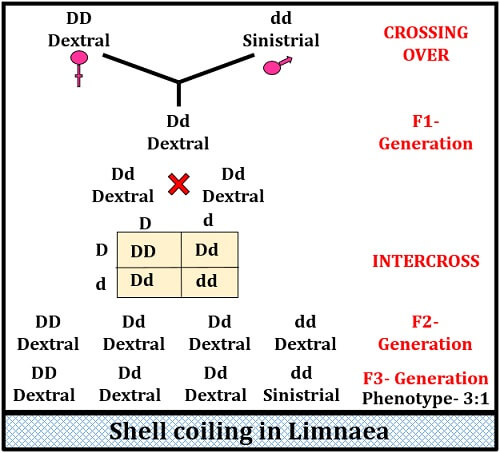 Crossing over between dd female and DD male 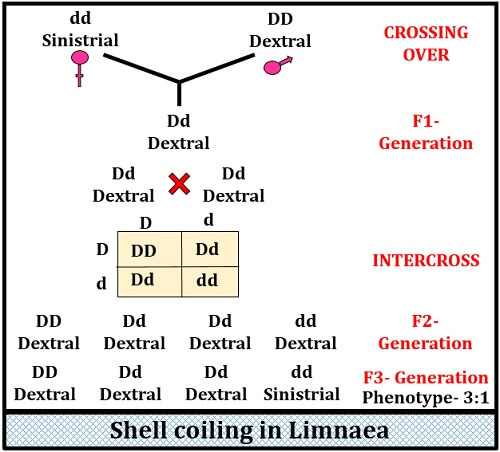 The pale green colour is due to the presence of leucoplast. The variegated colour is due to all three pigments, namely chloroplast, leucoplast and chromoplast. Let us understand this concept by looking at the picture given below. A first circle (yellow-coloured) indicates a female individual (G, P and V). 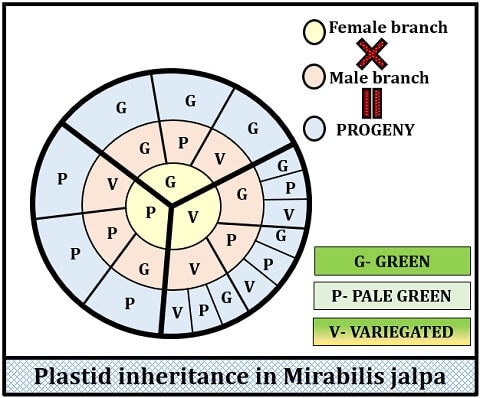