Its sexual phase is anisogamous, and the asexual phase occurs through binary fission. Here, you will get to know the elaborative study of the asexual and sexual stages in the Plasmodium’s life cycle.

It is the stage when the sporozoites enter the bloodstream via a mosquito bite. The sporozoites then find out their way to infect the liver cells.

This stage can be defined as the infection phase of the liver cells. It involves a series of morphological changes that are discussed below:

It is a stage before the infection of RBCs. Here, the cryptometazoites released from a liver cell will infect other new liver cells. Exoerythrocytic schizogony involves the following morphological changes.

The trophozoite wall becomes irregular during an amoeboid stage, resulting in the complete breakdown of haemoglobin content into haematin and globin. Then, the amoeboid stage transforms into erythrocytic schizont, which further undergoes cell division to form merozoites.

It is also called gametogony. During the sexual reproduction of the malaria parasite (Plasmodium), the gametocytes of the infected person’s blood will further differentiate and undergo fertilization to form a zygote in a female Anopheles mosquito’s stomach. Thus, the blood sucked by the Anopheles mosquito will primarily enter the mid-gut and later move towards the salivary gland. 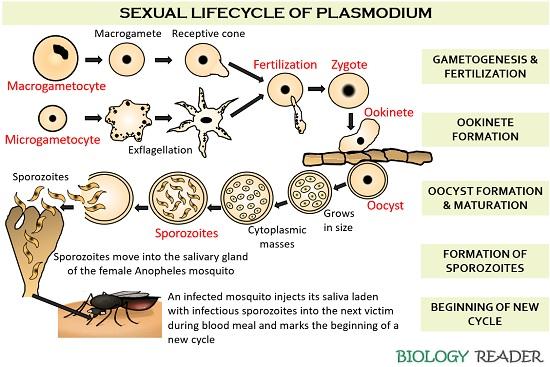 The female gametocytes, i.e. macrogametocytes, go through some morphological changes that form macrogametes that eventually differentiate into receptive cones.

An ookinete reaches the epithelium midgut through its gliding motility and penetrates the peritrophic matrix of the mosquito. As a result, ookinete will encyst into an oocyst on the midgut basal lamina.

After that, numerous sporozoites form after the maturation of the oocyst, followed by nuclear and cytoplasmic divisions. Sporozoites will rupture the oocyst wall, and then it finds their way to enter the mosquito’s salivary gland.

Beginning of a new cycle

Let us take a quick review of the Plasmodium’s life cycle by looking into the process summarized below:

Therefore, a life cycle of Plasmodium repeatedly occurs between the two hosts (mosquito and man). A malarial parasite and mosquito show a mutualistic relationship, in which both the Plasmodium parasite and the mosquitoes are equally benefitted.

According to the study, it was observed that the mosquitoes infected with Plasmodium have better survival and better blood-feeding rate. Similarly, the Plasmodium species get benefitted from the definitive host mosquito that helps them invade the host cell’s nutrients (mainly vertebrates) to increase their population.