The physiology of excretion is the study of different metabolic activities that occur inside our body, and it gives an idea of which organs and tissues facilitate the excretion mechanism. Sometimes, we get confused with the terms excretion and egestion.

Excretion is a mechanism of eliminating metabolic wastes from the body, while egestion is the process that removes the digestive waste or undigested food. Metabolic wastes include sweat, urine, and carbon dioxide released by the skin, kidneys, and lungs.

In this post, we will mainly focus on the physiology of excretion via kidneys by understanding the urinary system and the mechanism of urine formation. Urine contains toxic wastes like urea, uric acid and ammonia etc., that are formed by the metabolism of amino acids and proteins. Excretion relies upon the quantity of water that we intake.

Excretion is a common process that occurs in all living organisms. It refers to the mechanism of eliminating toxic metabolic nitrogenous wastes (urea, uric acid, ammonia etc.) after the metabolism of amino and nucleic acids. The process of excretion and the types of nitrogenous wastes that have to be eliminated varies greatly among the different species, depending on water availability.

Classification of Organisms Based on Excretion of Metabolic Waste

A human kidney discards the common excretory products like amino acids, ammonia, urea, uric acid etc., through urine. Protein digestion releases amino acids. Amino acids deamination and metabolism release ammonia and urea as toxic metabolic wastes. Uric acid releases in a crystalline form with a small amount of water in the animals that conserve water. Thus, organisms are broadly classified into the following groups, depending on the metabolic waste they eliminate.

The human urinary system includes kidneys, ureter, urinary bladder, and urethra that collectively constitute urine excretion. The kidney is a major organ that assists the passage of nitrogenous wastes to the urinary bladder through a long tube called a ureter. Let us look into the external structure of our urinary system. 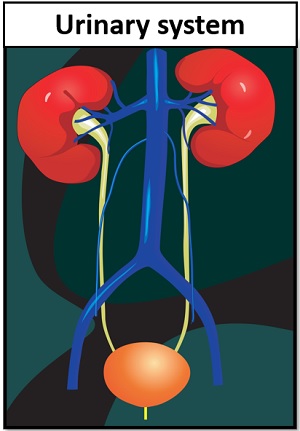 Kidneys in the human body have an average weight of 120-170 grams. They appear bean-shaped, and a layer of fat and connective tissue encircles the kidney. A vertical section of the kidney shows a renal capsule, cortex, medulla, pelvis and hilum. 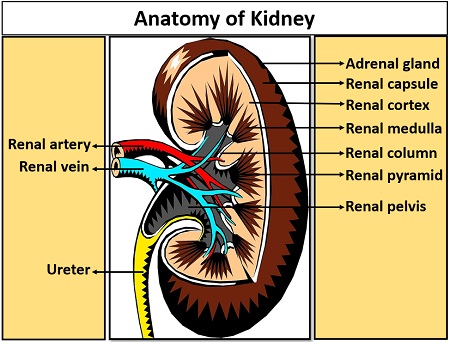 The renal capsule exists as a thin and tough outer covering of the kidneys that possesses dense connective tissues. The renal cortex is present interior to the renal capsule, and it includes a cluster of blood capillaries and a glomerulus.

Renal medullae are present interior to the renal cortex and possess a radial appearance, and comprise the nephron tubule, vasa recta and collecting duct. They are partitioned into an outer and inner medulla. An outer medulla comprises renal columns or the column of Bertini.

Renal pyramids have a cone-shape that constitute an inner medulla, extending out to form renal papillae. The renal pelvis resembles a funnel shape, comprising around 8-18 minor and 2-3 major projections or calyces. The renal pelvis is inner to the hilum.

Ureters appear as two long slender tubes originating from the renal pelvis region and going downwards to the urinary bladder. The urinary bladder is located in the lower part of the abdominal cavity and connected with the ureters and urethra.

The urinary bladder acts like a hollow and muscular organ that comprises an elastic wall, expanding or contracting accordingly. The urine is expelled out from the urinary bladder out of the body through the urethra.

The kidneys filter the undesirable metabolic wastes from the blood in the form of urine. Nephrons, along with the collecting duct, facilitate urine formation. Urine formation includes three consecutive stages:

It is a filtration site that filters the water and particulate solutes from the blood. When the blood passes from a glomerulus, the water and solutes go into the bowman’s capsule across the filtration membrane by the force of blood pressure in the blood capillaries. The filtrate obtained by this process is called “glomerulus filtrate”.

The filtration membrane allows the passage of fluids and solutes but blocks the substantial particles like blood cells and large proteins that retain in the bloodstream. The filtrate flows from the glomerular capsule to the uriniferous tubules.

It is the second phase that helps in retaining the vital nutrients from the glomerular filtrate. The filtrate contains wastes but also includes essential ions, glucose, amino acids etc., which the wall of uriniferous tubules reabsorb and pass to the adjacent capillaries.

Waste and hydrogen ions go into the lumen of the nephron tubule by the capillaries is called tubular secretion. The secreted ions, along with the filtrate, form urine that flows out of the distal tubule into a collecting duct. Finally, the urine goes down from the renal pelvis, into the ureter, and lastly to the bladder. 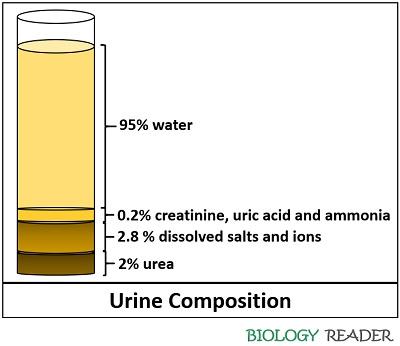 Nephrons form urine by processing the blood via sequential stages like filtration, reabsorption, and secretion. Urine is 95% water, and the remaining 5% is metabolic wastes like urea, creatinine, ammonia, and uric acid. The human body excretes dissolved salts and ions (Na+, K+, H+, and Ca2+) along with the urine.

Nephrons are the functional units of the kidney, which separate urine from the blood. Kidneys have cortical and juxtamedullary nephrons.

Malpighian or renal corpuscle and the coiled uriniferous tubules are the structural elements of the nephron. 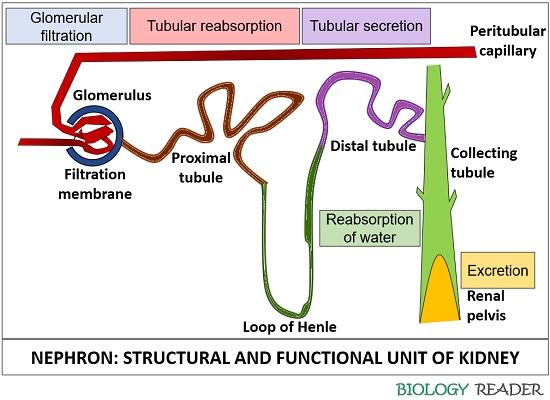 A visceral layer participates in the urine filtration and passes the filtrate to the capsular space of the parietal layer via capillaries.

Proximal, nephron and distal tubules contribute to the uriniferous tubules, which perform specific tasks inside the kidney. The proximal tubule is a 15 mm long, convoluted tube that originates from the capsular space of the parietal layer and extends downwards to the medulla to form a loop of Henle.

Henle’s loop or nephron tubule originates from the proximal tubule that descends into a thin limb (2-14 mm long) and goes upward, forming a thick limb (12 mm long). The ascending loop reaches the glomerulus and passes close to its afferent and efferent arteriole forming macula densa (a part of the juxtaglomerular apparatus).

Distal convoluted tubule originates from the macula densa cells of the juxtaglomerular apparatus that measures 5 mm in length. It joins the collecting duct. The filtrate from the collecting tubule reaches the renal pelvis, from where a pair of ureters discharge the urine into the urinary bladder.

Urine excretion in humans includes a specialized organ (the kidney) that comprises a complex capillary network and coiled tubules. The kidneys assist excretion and osmoregulation by their functional unit (nephron). Thus, studying the physiology of excretion through kidneys, we will come to know that the kidneys mediate the excretion of urine, and hormones assist the urine formation and excretion.