The difference between amoeba and paramecium relies on locomotion. Amoeba moves and feeds with pseudopods or temporary extensions. Activation of microfilament polymerization propels the cell membrane, ensuing pseudopodia formation.

Paramecium moves through short hair-like cilia. Many tiny hair-like cilia are present throughout the pellicle. Its number varies from species to species.

Oral cilia surround the exterior of the oral groove and capture food materials. Body cilia encircle the body surface and help in the locomotion of the organism.

This post discusses key differences between amoeba and paramecium and the comparison chart. You can also learn the definition, nutrition mechanism and similarities between the two.

Amoebas are microscopic single-celled organisms belonging to the Kingdom Protista. Amoebas appear as jelly-like globules, which inhabit saltwater, freshwater and wet soils. But, some amoebas can live inside the guts of humans and animals as commensals or parasites.

Their cell body is irregular or asymmetrical due to the cell wall absence. Amoebas exhibit a unique crawling motion by expanding or contracting the pseudopodia. The amoeba structure has the following distinct regions that you can see in the diagram below. 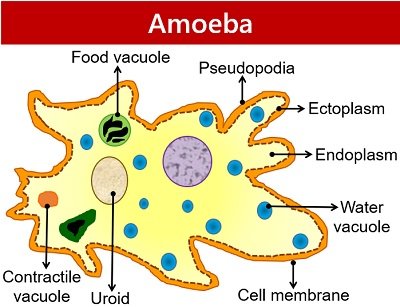 2. Digestion: A food vacuole carries the internalized food material by the amoeba. Then, lysosomes fuse with food vacuoles, releasing digestive enzymes inside the vacuole. It leads to the breakdown of complex food into digestible nutrients.

3. Absorption: Later, the amoeba cell absorbs nutrients obtained after the food enzymatic digestion. After absorption, the food vacuole remains with the undigested wastes. The cell store the absorbed food nutrients and use them later for energy synthesis. 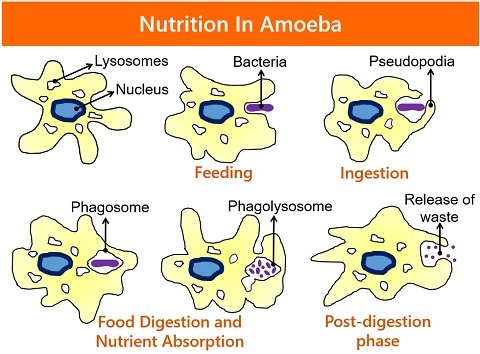 Paramecia are unicellular organisms that are part of the kingdom Protista. They have a slipper-like appearance with a size ranging from 50 to 300 um. Paramecium species are free-living and found in freshwater habitats. The paramecium structure has the following distinct regions that you can see in the diagram below. 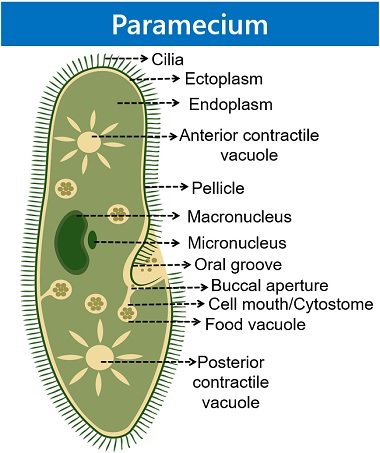 1. Ingestion: Paramecium swallows food by the oral cilia. Then, the captured food goes into the gullet through a mouth pore. Paramecium ingests the food with some surrounding water. As a result, a food vesicle forms.

2. Digestion: Parameciums have intracellular digestion. Food digestion occurs inside the food vacuole. The digestive enzymes released by the cytoplasm helps in breaking down the food.

3. Absorption: The cytoplasm absorbs the nutrients obtained after the enzymatic digestion. Later, the food vacuole shrinks after the absorption of desired nutrients. Then, paramecia store the absorbed food nutrients and use them later for energy synthesis.

5. Egestion: Paramecium expels the undigested food out of the body via the fusion of food vesicles with the cell membrane. 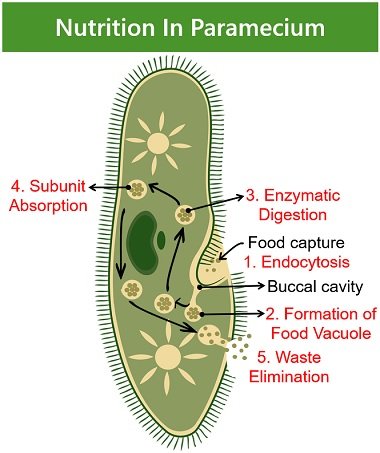 Key Differences Between Amoeba and Paramecium

Amoeba and Paramecium are the free-living protozoans belonging to the kingdom Protista. Yet, some species of amoeba behave like parasites, causing severe illness in humans. Both amoeba and paramecium play a pivotal role in the ecosystem.