Paramecium contains organelles necessary to sustain life, including growth, metabolism and reproduction. For the movement, they have small hair-like outgrowths or cilia.

The pellicle is the stiff outer covering that maintains the paramecium’s shape. For osmoregulation, paramecium species have contractile vacuoles.

They have an oral groove to ingest the surrounding food material. For food digestion, the paramecium comprises vesicles containing hydrolytic enzymes. Paramecium species also have cytoproct as a defecation site to excrete wastes.

For the defence against predators, they have trichocysts. Cell organelle like mitochondria helps in respiration and energy production. This post describes the paramecium’s size, appearance, and structure in detail.

Members of the genus Paramecium are microscopic but visible to the naked eye. Their size differs from species to species.

Paramecium species fall into two groups based on appearance.

The structure of paramecium consists of the following components: 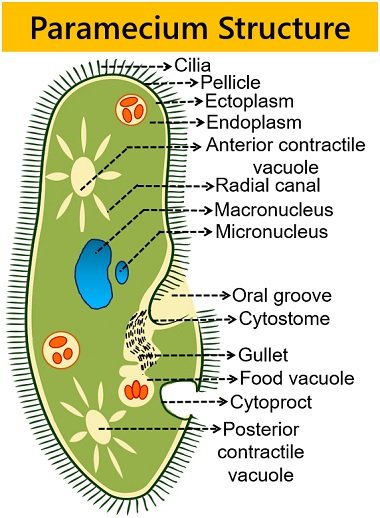 It is a stiff, although elastic membrane surrounding the paramecium body. Pellicle or Periplast consists of a gelatinous substance. It maintains the definite shape of the paramecium.

Although, a pellicle is flexible enough to allow paramecium to change its shape. Also, it protects the inner cellular contents. A pellicle consists of three membranes:

The outer membranes are continuous with the cilia. And the inner membrane holds the ectoplasm. The pellicle is not smooth (comprises regular series of hexagonal or rectangular depressions).

Some Paramecium species have spindle-shaped trichocysts. These explosive organelles have a defensive mechanism by discharging thin, non-toxic filaments. 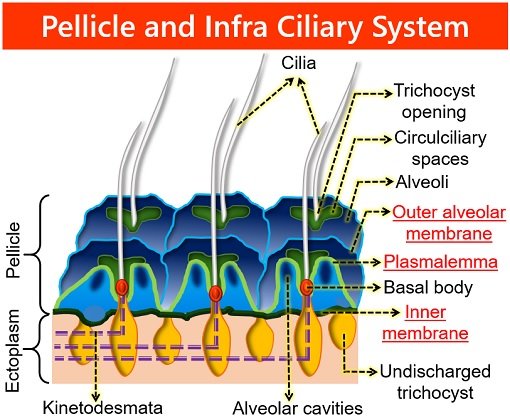 Many tiny hair-like cilia are present throughout the pellicle. Their number and arrangement vary from species to species. In approx, a cilium has 0.25 μm diameter and 20 μm length. A body of paramecium contains oral cilia and body cilia. 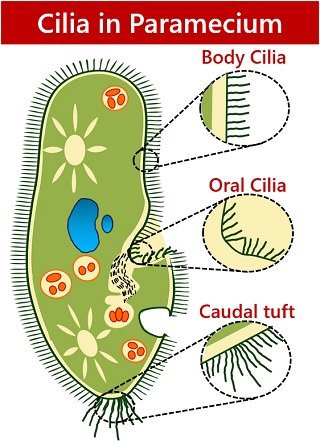 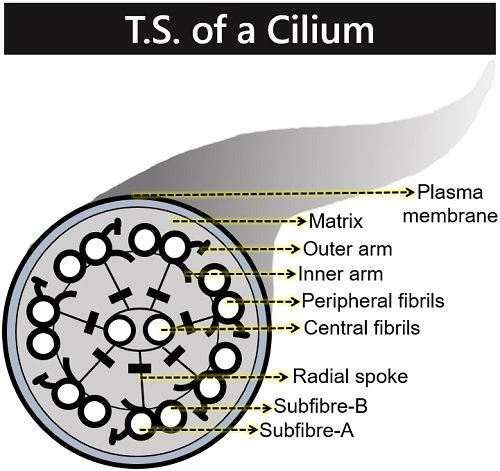 A cilium originates from the kinetosome. Besides locomotion and food capturing, cilia can sense external stimuli. Also, the infra-ciliary system helps in forming cell organelles during cell division.

It comprises the following structures:

The oral groove allows the entry of food materials into the cell using oral cilia. It is present in the middle. From the lower end, an oral groove forms a conical vestibule. This complex is in touch with the wide tubular passage, i.e. the buccal cavity.

It then leads to the wide cytopharynx through a mouth pore or cytostome. The cytopharynx produces a spherical food vacuole at the proximal end. 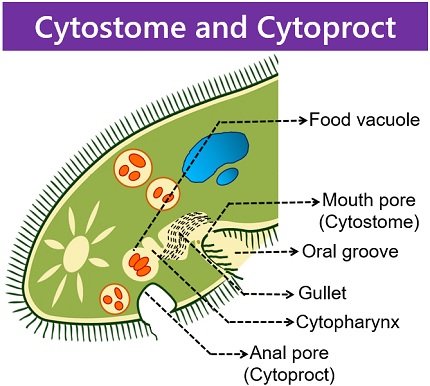 It is the mouth pore that appears funnel-like. Oral cilia also cover the lumen of the cytostome. Here, the oral cilia bring the food material down into the cytopharynx. The tubular cytopharynx forms food vacuoles through budding.

It comprises two distinct areas, i.e. ectoplasm and endoplasm. Ectoplasm is a thin, firm outer layer anchoring the roots of cilia. Also, it comprises trichocysts and fibrillar components. Ectoplasm plays a major role in protecting the paramecium body against damage.

Endoplasm is the metabolically active region holding different cell organelles. It comprises all organelles of the eukaryotic cells like:

Paramecium has a macro and micronucleus.

1. Macronucleus: It appears ellipsoidal or kidney-like with dense chromatin granules (DNA). It is also called a generative or vegetative nucleus and present one in number.

The macronucleus regulates vegetative or non-reproductive cell functions. It has a subset of DNA from the micronucleus. It is polyploid or contains up to 800 copies of the chromosome.

2. Micronucleus: It exists as small, compact and spherical. It is present close to the macronucleus, and the number can vary from species to species. The micronucleus is diploid and contains all the DNA materials.

It controls cell reproduction. Based on the type of micronucleus, the members of paramecium fall into two specific types:

These are non-contractile and roughly spherical. First, a paramecium captures the food from the oral groove to the cytopharynx via a mouth pore. 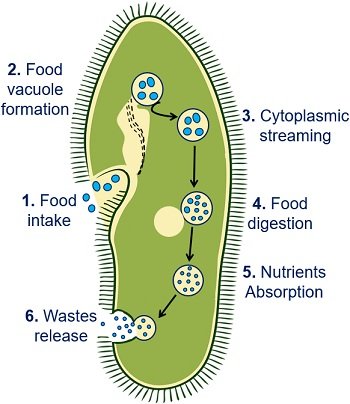 Then, the budding of the gullet gives rise to the formation of food vacuoles. These function like the temporary stomach. Food vacuoles fuse with the lysosomes in the cytoplasm.

These appear star-shaped. Single paramecium cell has contractile vacuoles at the anterior or posterior ends. They regulate osmoregulation and excretion of water and wastes. 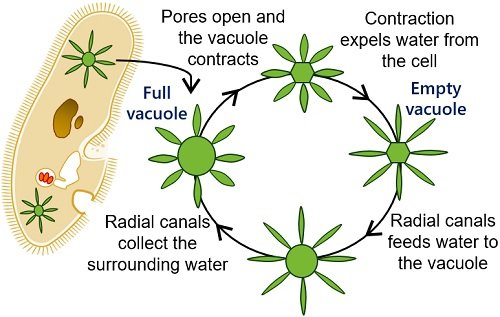