Macrophages also play a functional role in presenting foreign particles to the T cells and thereby causing the destruction of potential pathogens. They activate other immune cells by releasing cytokines.

Macrophages perform limitless functions like, production of reactive oxygen species that kill the phagocytosed cell. They are breaching immune cells between innate and adaptive immune systems.

They play a prominent role in the immune system by alerting immune cells in case of tissue damage, infection and accumulation of dead cells. This post describes the definition, types, mechanisms and function of macrophages.

Macrophages refer to the large specialized cells that can phagocytose or engulf foreign particles. They are found in the body tissues of infected cells at the time of infection. Macrophage recognizes and engulfs the target cells or pathogens and thereby releasing the accumulated waste. Monocytes originate from the bone marrow and enter the blood circulation. Later, they leave the circulation system and differentiate into macrophages in different body tissues. They predominantly exist in the endometrial stroma and myometrial connective tissues. 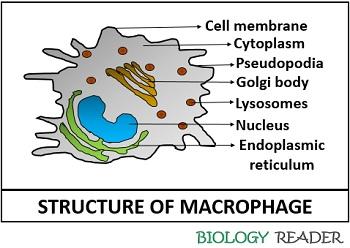 Monocytes derived from the stem cells of bone marrow enter the bloodstream. Then, they remain in the circulatory system for almost eight hours, but then enters the space of body tissues to differentiate into macrophages. Later, the macrophages undergo several changes and turn into distinct forms, where each is specialized to perform specific tasks in an immune system.

Macrophage enters the tissues of the target cell, where it facilitates invasion of foreign body or phagocytosis and eliminates dead cells. Hence, macrophages are the group of phagocytic cells collectively known as the mononuclear phagocyte system. Previously, the group of macrophages termed a reticuloendothelial system.

The macrophage can classify into different kinds, depending upon its location.

Based on Function & Activation

Macrophages show substantial heterogeneity among each other by the following factors:

Thus, the heterogeneity in macrophage is inherited from the precursors of monocytes, from which they differentiated and specialized in doing distinct functions.

A macrophage is an immune cell that kills the pathogen through series of steps mentioned below:

Macrophages recognize the antigens like bacteria and other organisms through their receptors system called toll-like receptors (TLRs). These receptors suspiciously identify the traits of pathogens like lipopolysaccharides, nucleic acids or extracellular proteins like flagellin from bacterial flagella and then specifically binds to it.

The binding of an antigen with the TLRs will produce an alarming signal for the other immune cells to be activated and fight against it.

Macrophages primarily mediate innate immune responses against bacteria, not viruses. Macrophage alone cannot kill the viral pathogen. T lymphocytes produce a defensive mechanism against the virus to kills it. Therefore, the killed virus particles are then eliminated by the macrophages.

Thus, to destroy a bacterial cell, macrophages employ either of the two mechanisms of pathogen killing (oxygen-dependent or oxygen-independent). After recognition, macrophages get activated and show more tendency to phagocytose the pathogen. It also releases inflammatory factors.

It is the mechanism by which the bacterial invaders are ingested into the macrophage in vesicles (Phagosome). 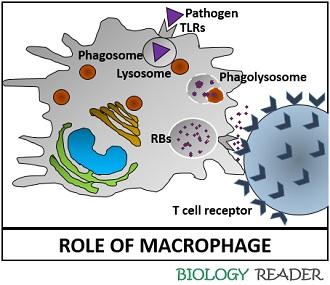 Later, the lysosomes (vesicles containing hydrolytic enzymes) fuse with the phagosome encircling the pathogens, which will result in the degradation of the target organism. It uses a series of enzymes to destroy a bacterial cell:

Finally, the bacterial cell turns into small particles released out of the cell via fusion of the residual body with the cell membrane.

Once macrophage engulfs the bacteria, it starts consuming more oxygen that results in a respiratory burst. As a result, macrophages produce reactive oxygen species (ROS) or superoxides, which act as an oxygen-rich antibacterial substance. The superoxide converts into hydrogen peroxide and singlet oxygen by the enzymatic activity of superoxide dismutase. Superoxide also reacts with hydrogen peroxide to produce hydroxyl radicals, which assist in killing the invading microbe.

Once macrophage activates, it starts increasing the production of nitric oxide synthase to facilitate the formation of peroxynitrite radicals by reacting nitric oxide with hydrogen peroxide.

The radicals formed by these enzyme systems can be detrimental to both the pathogen and the cell itself, which are found within the cellular compartments. Therefore, a method of killing the invading microbes using ROS and RNS molecules is called oxygen-dependent intracellular killing.

Macrophages are another kind of scavenger cell that is the mature form of monocytes, produced by the stem cells of bone marrow and circulate through the blood. Monocytes differentiate into macrophages in different body tissues. Macrophages can be compared with the porous filter that traps the target organism.

Macrophages recognize and ingest foreign particles by digesting or dissolving the microbial components of the target organism. Therefore, we can conclude that macrophages play a significant role to mount a more effective defence by not only in eliminating pathogens directly but also act as antigen-presenting cells.