Here, we will talk over some important terms related to the given context along with the comparison, definition, types, structure and key differences between the antigen and antibody.

Antigens are the foreign substances recognized by the particular antibodies. All the antigens cannot induce an immune response, but which are capable termed as immunogens. The antigens can be bacteria, virus, fungi, etc. and other than that, it can be dust, pollen grains etc.

Immunogen: It can define as any foreign substance that generates an immune response. “All immunogens can be antigens, but all antigens cannot be immunogens”.

Antigenecity: It is the property of an antigen, through which it has the ability to bind with specific antibodies or cell surface receptors.

Immunogenecity: It is the property of an antigen to generate an immune response.

Immunological reactivity: It can define as the specific reaction of antigen and antibody sensitised cells.

Antigenic determinant: It is also called an epitope. It is another property of an antigen, by which it shows specificity towards a specific antibody. It consists of a 4-5 amino acids or monosaccharide residues. The arrangement of an epitope can be sequential or linear. These are specific in nature, and specificity is due to:

Foreignness: This is the principal property of an antigen, which determines the antigenicity of a molecule, i.e. Higher is the degree of foreignness higher is its antigenicity.

There are two types of antigen, depending upon their chemical reaction.

Complete antigen: It can induce the production of an antibody alone. It can react with a specific antibody and do not need any carrier protein molecule to induce antibody formation.

Haptens: These are also called incomplete antigens, as these cannot influence the production of the antibody alone. It cannot react specifically to an antibody, without a molecular carrier. It further categorizes into two types, as shown in the diagram below:

Diagram showing the association of hapten molecule with a molecular carrier to form a complete antigen is given below:

T-cell dependent antigen: These are the protein antigens, which can activate b-cells only by the help of t-cells. It can produce all immunoglobulins; IgG, IgM, IgA, IgD and IgE. Its structure is quite complex, and this kind of antigenicity found in most of the pathogenic microorganisms like a virus.

T-cell independent antigen: Other than protein molecule, it contains a polysaccharide that can directly activate the b-cells without t-cell association. It can only produce IgM antibody. The antigens belong to this group, have simple morphology.

Antibodies are the large, organic and Y-shaped molecules, which form in reaction to the particular antigens. Its primary function is to recognize the invaders and to destroy or neutralize them. This is the key element of adaptive immunity.

Humoral immunity: Antibodies direct the humoral or antibody-mediated immunity. In this type, the antibodies formed by the plasma cells perform the following activities like phagocytosis, opsonisation, and neutralisation etc.

B-lymphocytes: It is also called B-cells. B-lymphocytes originate from the stem cells of the bone marrow and a part of the humoral immunity.

Plasma cells: It forms after the maturation of B-cells. Plasma cells are considered as the hub for an antibody production, which can produce about 2000 antibodies per second.

Structure of an Antigen

It mainly comprises protrusions on the cell surface, which are called antigenic determinants (epitopes). These protrusions give specificity to an antigen molecule, after which it can only bind to the definite antigen-binding site of an antibody.

Structure of an Antibody 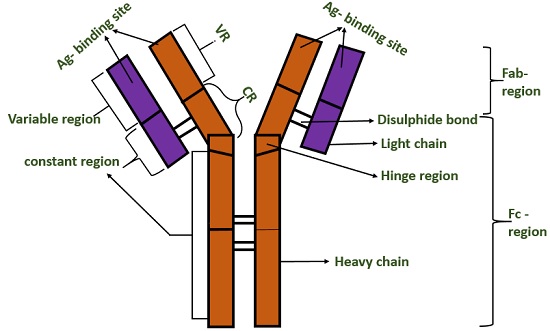 It consists of 4 polypeptide chains:

Cr: It stands for the constant region. It is the lower part of the Y-shaped antibody that is invariable in nature. For ƴ, α and δ (Cr is 330 amino acid long) and for µ & ɛ (Cr is 440 amino acid long).

Vr: It stands for the variable region. It is present on the terminal ends of both h-chain and l- chain of an antibody, which is variable in nature. In each class of immunoglobulin, variable region differs and called the hypervariable region (5-10 amino acid long).

Fab: It stands for fragment antigen binding-site, which is found in the N-terminus region of an antibody. The two-variable regions form one antigen-binding site.

Fc: It stands for fragment crystallisation, which is the remaining part of a variable region participating in a cellular attachment.

Key Differences Between Antigen and Antibody

Therefore, we can conclude that the study of the antigens and antibodies can help us to determine the potency of the foreign body and the kind of immunity developed in our body in counter to that specific antigen.