Potato dextrose agar media is primarily exercised for the growth and isolation of different yeasts and moulds. It can be practised in the form of a liquid broth and solid culture medium.

PDA media serves as an ordinary growth medium for the yeasts and moulds, but it can be made selective by incorporating selective agents like tartaric acid, chloramphenicol etc.

PDA media comprises potato infusion and dextrose sugar that gives a nutrient base and the carbohydrate source, respectively, for the fungal growth.

In this post, we will discuss the principle, appearance, composition, role of the chemical constituents, media preparation of the potato dextrose agar media. Also, the storage, results, uses and limitations of the PDA media have been explained.

Potato dextrose agar media principally works as the ordinary or selective medium, which determines the growth or presence of different yeasts and fungi from the different samples that are important for sanitary purpose, especially food products.

It can be supplemented with selective agents like acids and antibiotics (chloramphenicol, tartaric acid and chlortetracycline) that restrict bacterial growth that may interfere with the fungal growth. Potato dextrose agar media is clinically significant for the culturing, isolation and maintenance of fungi (like yeasts and moulds).

The ingredients of the potato dextrose agar media in 1 L of distilled water include:

Potato dextrose agar is supplemented with some selective agents, which quantity for the 1 L of deionized water includes:

The potato infused in PDA medium supplies the nutrient base for the development of yeasts and moulds. Dextrose is a fermentable carbohydrate that supplies a sole C-source to promote fungal growth.

Agar acts as a solidifying agent of the media. The selective antibiotics and organic acids in PDA inhibit bacterial growth. TA (Tartaric acid) in the PDA medium enumerates the microbe’s presence in food and dairy products.

Sometimes, antibiotic like chlortetracycline serves as a selective agent that enumerates the microbial population from cosmetics. Chloramphenicol is also an antibiotic that supports fungal cultivation from mixed samples.

The preparation of potato dextrose agar media follows the given protocol: 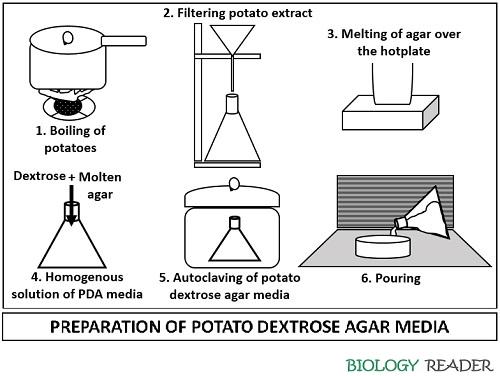 To infuse 200 grams of potato in the PDA media, we need to follow the following steps:

Ideally, the PDA media must be kept under refrigeration (at 2-8 degrees Celsius). If there is cracking, discolouration or any other signs of contamination, then the media must be discarded. The media should be kept away from the direct light.

The result can be indicated by the growth of fungi in the culture media.

PDA media only detects the presence or absence of multicellular fungi, but the isolated fungi require biochemical, immunological, molecular, or mass spectrometry testing for the confirmed identification.