The difference between apoptosis and necrosis is mainly due to factors like:
Cell death: Apoptosis is a type of cell death, which occurs by the self-annihilation of the cell. Oppositely, necrosis is a form of focal cell death caused due to the environmental perturbations.

Occurrence: Apoptosis occurs to maintain the proper functioning of the cell by removing the dead or metabolically inactive cells via phagocytosis. In contrast, necrosis occurs as a result of cell exposure to cytotoxic agents.

Apoptosis can define as the innate process of cell death, which is generally regulated by the cells itself to maintain the cell number (ratio of viable and dead cells). It does not cause any harm to the tissues, but its abnormal functioning may impose some severe health effects.

Apoptosis is a caspase-dependent cell death pathway that mediates membrane blebbing, cell fragmentation and cell proteolysis. Caspases include a large group of proteases, which participates in the predefine cell death process. Upon activation of caspase, the scaffold proteins (lamins) cleave that results in nuclear shrinkage and fragmentation.

Plasma membrane blebbing occurs due to the breakdown of gelsolin by the caspase-3 enzyme. A cytoskeleton protein (Fodrin) is also cleaved by caspases, which results in an overall loss of cell integrity, size or shape.

Necrosis can define the kind of accidental cell death, which is not regulated by the cells. It is induced by an overdose of cytotoxic factors like drugs, toxin, ischemia etc. or environment perturbations like radiation, lack of oxygen (hypoxia) etc.

Necrosis is a passive and degenerative process, which do not need ATP. It triggers the inflammatory response in the abnormal cells or diseased organ or tissue as a result of cytolysis. It often results in scar formation along with inflammation.

Necrosis is a form of focal or localized cell death, which occurs in the particular cells or tissues affected by some cytotoxic agents. During necrosis, swelling of the cell is the first event, which is later followed by the blebbing of the plasma membrane and cytolysis. 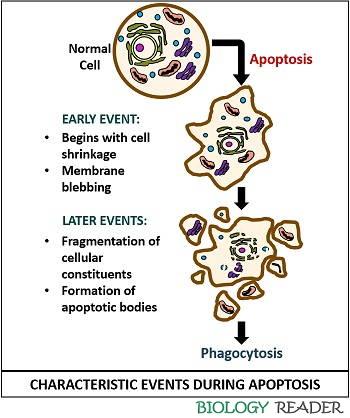 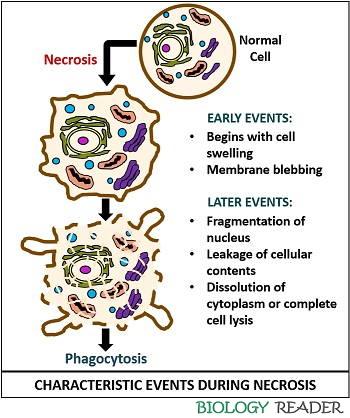 Let us discuss the morphological, biochemical, physiological and molecular changes in the cells during apoptosis and necrosis.

Apoptosis causes membrane blebbing and margination, without affecting the membrane integrity. The chromatin material of apoptotic cell becomes condensed due to the cellular shrinkage. It also forms persistent apoptotic bodies.

Necrosis cause membrane blebbing and margination, which loosens the membrane integrity. The chromatin material of necrotic cell becomes randomly fragmented due to the increase in cell size. It causes cell-lysis and disintegration of cellular contents.

Apoptosis process is genetically controlled and resulting in the formation of non-random oligonucleosomes of DNA. It is an active cell death process, which requires energy input or ATP. In apoptosis, pre-lytic DNA fragmentation occurs.

The loss of ion homeostasis marks biochemical changes. It is a passive cell death process, which does not require energy input or ATP. In necrosis, post-lytic DNA fragmentation occurs.

Apoptosis causes the death of either a single cell or small group of cell, which is evoked by the physiological stimuli (by the cell itself). The apoptotic bodies are removed by the specialized macrophages or by the neighbouring cells. Apoptosis does not cause tissue damage and inflammation.

Necrosis causes the death of a large group of adjacent cells, which is evoked by the pathological stimuli (by the external factors like temperature, chemicals etc.). The specialized macrophages eliminate the necrotic cells. Necrosis causes tissue damage and acute inflammation.

In apoptosis, cell degradation and fragmentation is triggered by the activation of the caspase enzyme. Cell apoptosis occurs due to the loss of normal cell survival signals or by the action of harmful agents.

In necrosis, cell degradation and fragmentation occurs by the release of hydrolytic enzymes after the breakdown of lysosomes. Cell necrosis occurs due to harmful chemical, physical or chemical agents. It occurs due to the ATP depletion, membrane damage and free radical injury.

Necrosis: It is mainly of six types:

Key Differences Between Apoptosis and Necrosis