Occurrence: Spermatogenesis occurs inside the seminiferous tubules of a testis, whereas oogenesis occurs inside the ovary.
The sperm cells are the product formed in the spermatogenesis, which is flagellated, i.e. motile. On the contrary, ova is the product produced from the oogonia, which are non-motile. Therefore, both sperm cells and ova are structurally and functionally different from each other.

It is the reproductive stage where the formation of haploid sperms or spermatozoa occurs from a diploid stem cell called spermatogonium within a male gonad, i.e. seminiferous tubules of a testis.

It is the reproductive stage where the formation of haploid ovum occurs from a diploid stem cell called oogonium within the female gonad, i.e. ovaries.

Stages of Spermatogenesis and Oogenesis

Both the process of gametogenesis differs in their three phases, namely multiplication, growth and differentiation. 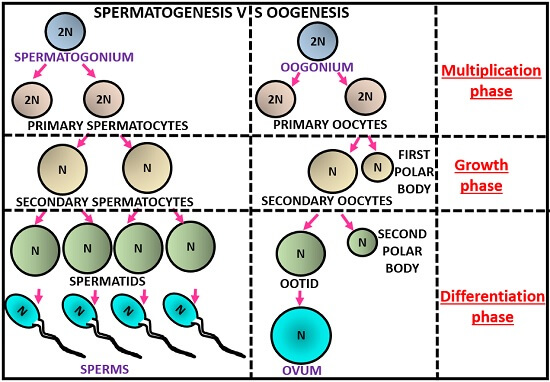 Spermatogenesis: It involves the following steps:

Oogenesis:  It involves the following steps:

Facts about Spermatogenesis and Oogenesis

There are some facts that we must know about both the processes. So, let us discuss a few points that we should remember to know more about spermatogenesis and oogenesis.

Points to remember in Spermatogenesis:

Points to remember in Oogenesis:

Difference Between Sperm and Ovum

Male gametes (sperms) and female gametes (ova) are produced after the cycle of spermatogenesis and oogenesis, respectively. Both sperm and ovum differ in many ways like their structure, motility, shape, size etc.

Sperm is yolkless. The size of the sperm is smaller than the spermatocytes. It contains less amount of cytoplasm. Sperm is surrounded by only one plasma membrane. It consists of four parts head, neck, middle piece and tail, i.e. sperm is differentiated. 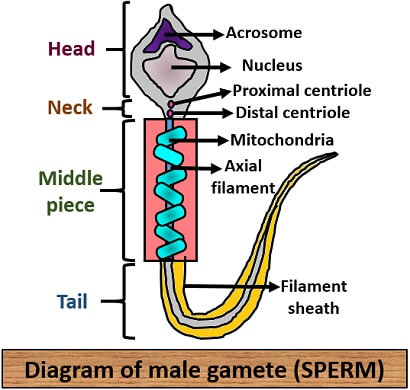 It lacks a head, neck and tail, i.e. an ovum is not differentiated. 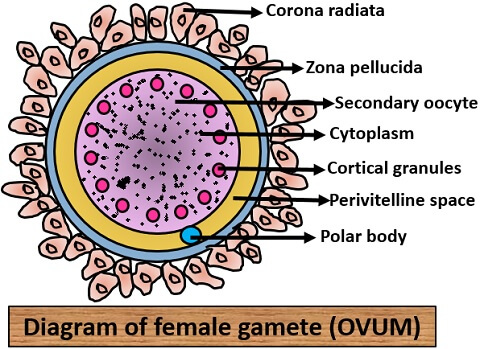 Key Differences Between Spermatogenesis and Oogenesis

We can conclude that both spermatogenesis and oogenesis are the reproductive phases, which basically includes three phases like multiplication, maturation and differentiation. Multiplication is a stage, where spermatogonium and oogonium multiply by mitosis to form germ cells, i.e. spermatocytes and oocytes, respectively whose number increases after further cell divisions.

Maturation is a phase where both the germ cells grow in size. Maturation takes place when germ cells undergo meiosis, after which they form spermatids and ootids that later undergo differentiation to produce male and female gametes, respectively.

4 thoughts on “Difference Between Spermatogenesis and Oogenesis”