Euglena has a tiny dark eyespot at its front or anterior end. This post mainly describes the definition, location, function of the eyespot apparatus within the euglena cell. You will also get to know the mechanism of eyespot mediated light perception.

Eyespot refers to the heavily pigmented region, prevalently seen in the motile green algae and some unicellular photosynthetic organisms. It functions as a photoreceptive organelle that detects light. The eyespot apparatus is a combination of photoreceptor proteins and carotenoid screening pigments. This combination helps in detecting light directionality. 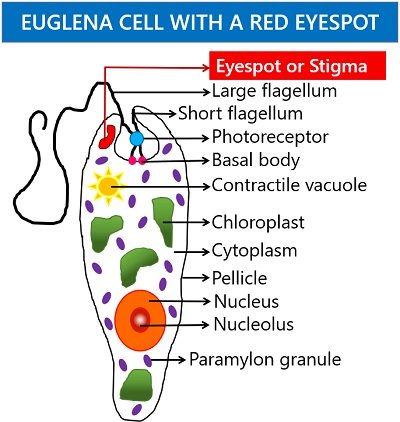 The eyespot in Euglena is present towards the anterior portion or close to the paraflagellar body. It facilitates signalling between the photoreceptors and effector organelles like flagella. Eyespots are light-sensitive structures classified mainly into five types (Type-A, B, C, D and E). Flavoproteins and Retinylidene are the two major eyespot proteins. Euglena has a type-D eyespot and it contains flavoproteins. After staining an eyespot or stigma with osmium tetraoxide, a black precipitate forms.

Location of Eyespot Apparatus in Euglena

The group of Euglenophyta are phytoflagellates having eyespot at the anterior end or near the reservoir. The eyespot of Euglenophyta appears as a distinct dark spot within the cell. It is localized near the paraflagellar body (PFB) and towards the base of the large flagellum. 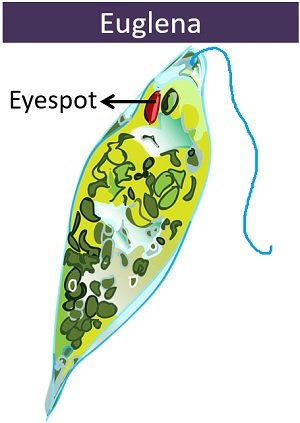 Euglena shows phototaxis or phototactic movement in response to the light stimulus. Phototaxis is a directional locomotory movement seen in unicellular and multicellular phototactic organisms, which can be positive or negative.

Euglena rotates about its long axis. The flagellum moves around its base or an anterior portion, thereby pushing Euglena backwards. When the light falls on one side of the photoreceptor, the eyespot apparatus in Euglena periodically shades the photoreceptors to initiate phototaxis.

This screening function of the eyespot causes a succession of phobic responses that allows movement of the Euglena towards the increasing light source. After an organism’s orientation, a continuous shading of the photoreceptor results and no further phobic response occurs.

Therefore, we can conclude that a pigmented shading device or eyespot appears as a red eyespot within the Euglena that helps in light perception and direction of movement. It is close to the reservoir and sensitive to the light stimulus.