Fertilization in flower is a type of sexual reproduction, where the flower’s male and female gametes fuse to form a zygote or fruit. In a flowering plant, pollen grains released from an anther containing two sperm cells or male gametes of the flowering plant. The flower’s ovary consists of a megasporangium or ovule, which includes a seven-celled embryo sac.

Definition of Fertilization in Flower

Fertilization in flower refers to the flower’s growth process that involves the fusion of sperm cells carried by the pollen grains and the egg cells in an ovule to form a zygote. In flowers, “stamen or androecium” is the male reproductive part, and “carpel or gynoecium” is the female reproductive part. The flower’s anther carries the male gametes or sperm cells within the pollen sacs or microsporangium. 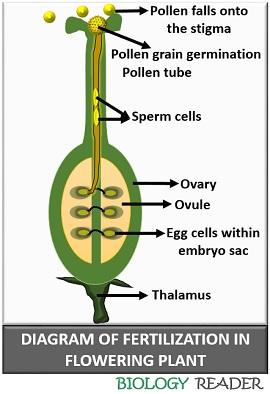 The female gametes or egg cells reside with an ovule or megasporangium. By pollination, the pollen grains reach the top of the flower’s female reproductive part, i.e. stigma. Then, through the pollen tube germination, the passage of sperm cells to the egg cells become possible and eventually, fertilization occurs.

Process of Fertilization in Flower

A method of fertilization in flowering plant involves the following steps: 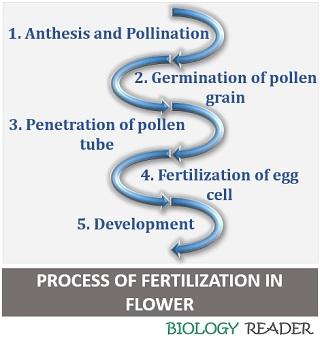 First, the anthers elevate via elongated filaments. “Anthesis” refers to the process during which the anthers ultimately dangle out of the spikelet. After anthesis, pollination immediately occurs. During pollination, anther releases pollen grains containing the sperm cells.

Then, the pollen grains are transferred to the sticky stigma via some pollinating agents like wind, water and insects. The stigma also receives the pollen grains in the flowering stage or during the time of spikelet opening.

Under favourable conditions, the pollens adhered to the stigma starts to germinate. On germination, a pollen grain forms a germ tube or pollen tube. The pollen tube acts as a passage from the stigma to an ovule.

Penetration of the tube into the ovule

The pollen tube first penetrates the stigma and grows downwards from the style to an ovule and finally the micropyle region of an embryo sac. The sperm cells carried by the pollen grains are released into the tube, which ultimately penetrates an ovule wall.

It involves the fusion of the flower’s male and female gametes. The embryo sac contains seven cells, one egg cell, synergid, two polar nuclei and three antipodal cells. A pollen tube enters one of the synergids and discharges its sperm cells. 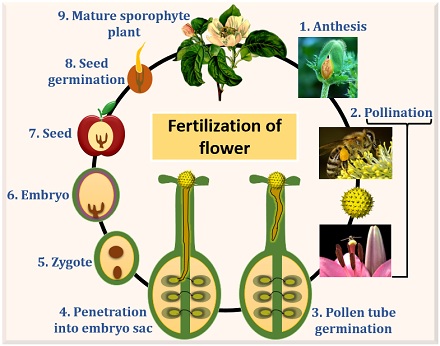 A process of fertilization in flowers is an important growth event, which evolves new species by providing new genetic characters to the plant. Fertilization ensures the diploidy of the zygote by the fusion of haploid sperm cell and egg cell. It is essential for the formation of seeds and fruits.