The difference between RBC and WBC is mainly due to the following properties like colour, morphology and function. RBC stands for Red blood cell. WBC stands for white blood cell.

Colour: The terms (red blood cell and white blood cell) clear the colour difference. The reason behind the red colour of the RBCs is due to the iron atom present in the haemoglobin pigment. The white blood cells are colourless because they lack any coloured pigment.

Function: Both red blood and white blood cells belong to the circulatory system, in which the former facilitates the gaseous exchange between the cardiovascular system and the latter provides resistance against the infection and pathogen attack.

RBC is an acronym of the term “Red Blood Cell”. It refers to the component of blood or a type of blood cells, which originates from the bone marrow, attains maturity for at least seven days and finally enters the bloodstream to transport O2 and CO2 into and out of the body.

The formation of red blood cells is regulated by a hormone “Erythropoietin” produced primarily by the juxtaglomerular cells of the kidney through a process “Erythropoiesis”. 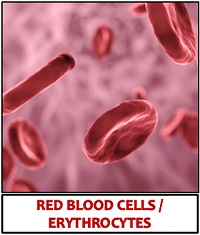 “Reticulocytes” are immature RBCs. Oppositely, “Erythrocytes” are the mature RBCs. The structure of mature RBCs lacks a nucleus and other cell organelles like ribosomes, mitochondria etc., and they can modify their shape.

The red blood cells move freely in the bloodstream, and they can flexibly pass through the small blood vessels and capillaries. RBCs possess red colour due to the presence of protein pigment “Haemoglobin”.

Mutation in the haemoglobin gene can cause abnormal disease like sickle cell anaemia, where the oval shape of RBCs changes to sickle-like. “Haematocrit” is a standard unit that measures the volume of RBCs.

The method determining the RBC ratio in the blood is known as the “Haematocrit test”. The “Homeostasis” is an equilibrium state in which the degradation and production occur simultaneously, or it maintains the RBCs concentration.

WBC is an abbreviation of the term “White Blood Cell”. It refers to the component of blood or a type of blood cells, which also originates from the bone marrow and attains maturity in the organs like lymph nodes, spleen and thymus gland.

The production of white blood cells is regulated by a hormone “Leucopoietin” that stimulates myeloid cells’ production through a process “Leucopoiesis”. 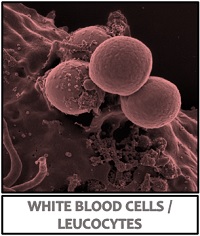 Based on cell lineage, myeloid and lymphoid cells are the two common types of leucocytes. A myeloid stem cell produces monocytes and myelocytes (neutrophils, eosinophils and basophils), while a lymphoid stem cell produces lymphocytes.
Similarly, based on specific cytoplasmic granules, granulocytes and agranulocytes are the two common types of leucocytes. The granulocytes involve neutrophils, eosinophils and basophils and possess distinct granules in the cell cytoplasm. In contrast, non-granulocytes include monocytes and lymphocytes, which consist of non-distinct or non-functional granules.

Key Differences Between RBC and WBC

Therefore, we can conclude that RBCs and WBCs are a part of the circulatory system, which perform distinct functions to boost the body’s immunity and metabolism.

1 thought on “Difference Between RBC and WBC”