The water cycle has four significant processes like evaporation, condensation, precipitation, runoff. It allows cyclic water flow within and above the earth. Water is the basic necessity for survival, which covers nearly 70% of the earth’s surface.

Therefore, replenishment, purification and circulation of water becomes necessary. The hydrological cycle is a standard example explaining the three physical states of water, i.e. gas, liquid and solid. This post describes the definition, components and diagram of the hydrological cycle.

It refers to the biogeochemical cycle that allows the constant movement of water over four spheres (atmosphere, lithosphere, hydrosphere and biosphere). Water can flow cyclically on, over and beneath the earth’s surface through the water cycle. It is a continuous pathway. Hydrology is a branch of science that deals with the study of water, including the physical geography of the water cycle. 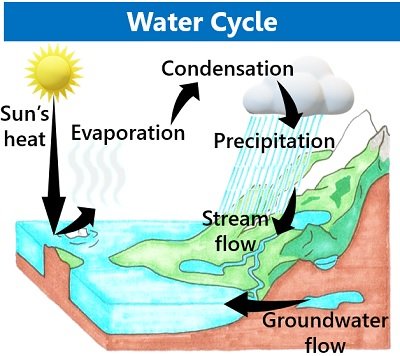 The hydrological cycle involves the exchange of energy between water and the environment, resulting in atmospheric temperature and climatic changes. During evaporation, water utilizes solar energy (from its surrounding) and cools the environment by forming water vapours. Conversely, water vapours release energy (the latent heat of condensation) to form liquid droplets during condensation and warm the atmosphere.

Rivers, oceans, lakes etc., are the water bodies in which water exists as a liquid. However, the sun’s heat or radiation turns this liquid water into the gaseous state, i.e. water vapours. We have seen in our daily lives that a film of vapours forms on the top of the lid after boiling water. Likewise, sunlight heats the surface of water bodies, which leads to the formation of water vapours. 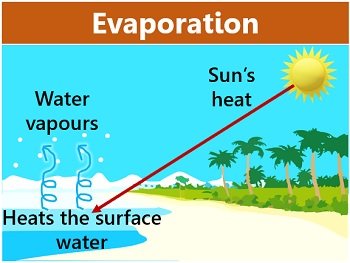 It also contributes to the water cycle. Vegetation (trees and grasses) releases water vapours (97-99.5%) from leaves through transpiration and guttation. Plants primarily absorb the water through roots and transfer it to other parts. Plants harness a minute quantity of water to undergo growth and metabolism. 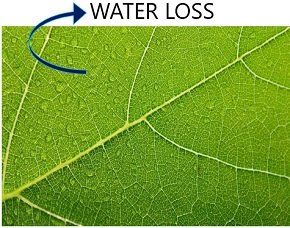 It is the phase transition of water from a gaseous to a liquid or solid phase through convection. In addition, buoyancy or upward force drives humid air higher. Eventually, the warm air parcel enters the condensation nuclei and condenses onto tiny particles (dust, pollen, sea salts, pollutants etc.). After reaching a certain height (20 km above the ground), the air becomes cool below its dew point or the point of saturation. 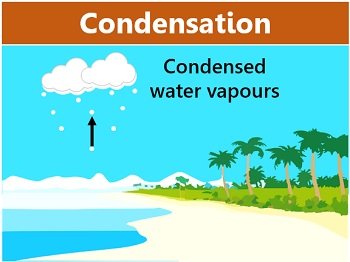 As a result, the warm air parcel (containing water vapour) becomes cold and condenses back into a liquid state (liquid droplets). At high altitudes, vapours directly condense into ice crystals through deposition or gas-to-solid phase transition. In this way, the condensed water droplets or ice crystals clump to facilitate cloud formation in the sky. Condensation may occur high in the atmosphere or at ground level. Clouds at ground level are called fog.

Clouds move around the globe through wind, resulting in a collision between the cloud particles. It occurs when the condensation reaches its maximum, or the atmosphere becomes wholly saturated with condensed vapours. As a result, clouds grow in size, and all forms of water particles fall out of the sky as precipitation. 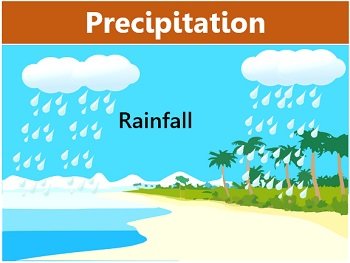 The smallest drop falls faster and combines with the leading drop. In the ice-crystal process, ice crystals attain a critical size and fall as snow or ice pellets. Besides that, water also precipices as sleet and hail.

Depending upon the type of cloud particles, precipitation occurs in four different forms, as mentioned in the diagram below. Hence, water enters the lithosphere (including terrestrial and water bodies).

Let us discuss some significant sources of precipitated water runoff. The precipitated water that goes into the oceans or onto the land is called surface runoff or streamflow. Snowmelt is water that flows overland due to the melting of snowpacks during the summer. Some portion of the surface water infiltrates deep into the ground or enters the saturated soil subsurface through soil porosity, and the process is called infiltration. 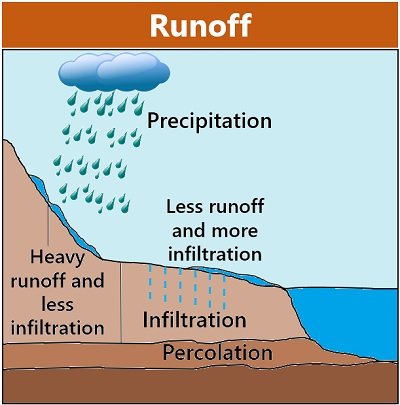 Therefore, the hydrological cycle describes the storage and continuous recycling of water from one reservoir to another via different mechanisms. Biosphere, atmosphere, lithosphere and hydrosphere are the following pools or reservoirs. Evaporation, condensation, precipitation, deposition, infiltration, and percolation effectively facilitate water flow within different pools.

We can conclude that the water cycle is the water recycling process within and above the earth in a cyclic manner. During this trip, water goes through its three physical states (gas, liquid, and solid). Nature replenishes the earth’s water supply through the water cycle.