A nucleus can define as the most crucial cell organelle of a eukaryotic cell, which regulates the genes of the DNA to perform different tasks including cell metabolism, growth and reproduction etc. It is the storehouse of hereditary material, which contains the considerable genomic content condensed into the various forms like chromatin or chromosomes during the cell cycle.

The nucleus appears as a small sphere within a cell, which is encircled by a selective nuclear membrane that functions as a barricade for the passage of macromolecules. Nucleolus and the chromatin dispersed inside the nucleoplasm or nuclear sap are the components, which are interior to the nucleus. 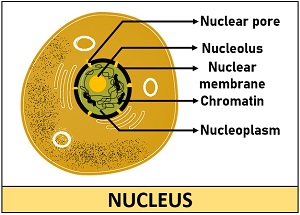 Besides, some nuclear pores are also found on the nuclear membrane, which allows the free exchange of small ions and protein-mediated translocation of macromolecules within the cell and nuclear matrix.

Nucleolus can define as the sub-organelle found within the nucleus, which performs a central role in mediating the biosynthesis of ribosomes. Its ultrastructure encompass the fibrillar, granular, dense fibrillar components. The fibrillar centre is the site for the formation of ribosomal proteins, in which rRNA binds to the specific protein precursors.

Granular components carry rRNA that binds to ribosomal proteins and acts as a site for pre-ribosome assembly. The dense fibrillar region allows the processing or some modifications in the newly transcribed rRNA connected to the ribosomal proteins. 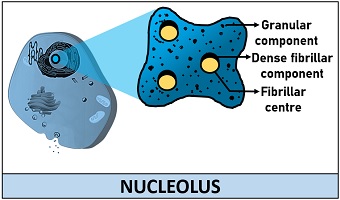 In the plant cells, nucleolar vacuoles are also present, which lacks an animal cell. It constitutes 25% of the cell nucleus. The quantity of nucleoli differ among different species of plant and animal cells. It is also known as “Ribosome factory” that aids the production of ribosome subunits and protein synthesis.

Key Differences Between Nucleus and Nucleolus

Therefore, we can conclude that both the nucleus and nucleolus carries out a significant role in the cells of multicellular organisms. Both are the basophilic bodies, which take up the colour of basic stain due to the presence of negatively charged bodies like DNA, RNA, and histone proteins. The ultrastructure of nucleolus as well as the nucleus can be observed through the electron microscopy.

1 thought on “Difference Between Nucleus and Nucleolus”