Nitrification is one of the crucial steps in the nitrogen cycle that occurs in soil. It is an aerobic process that involves two successive oxidation reactions, in which the ammonia first oxidizes into nitrites, and then nitrites get oxidized into nitrates.

It occurs in the soil and includes members of autotrophic bacteria and archaea. The soil microorganisms that facilitate the interconversion of soil ammonia into the inorganic nitrates or participate in the process of nitrification are called “Nitrifying bacteria”.

The energy yield in nitrification is quite low, and the process is relatively slower than the other processes occurring in the nitrogen cycle. Thus, nitrification is an oxidative process whereby ammonia oxidizes into nitrate by producing nitrite as an intermediate. This post describes the definition, steps, key points and factors affecting nitrification.

It refers to the biological process in which ammonia (NH3) or ammonium (NH4+) primarily converts into nitrites (NO2–) and then into nitrates (NO3–). Its mechanism involves two distinct energy-producing reactions, which is further used to fix carbon dioxide. 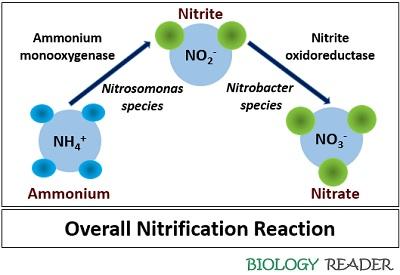 Nitrification is a two-step process mediated by specific groups of soil microorganisms.

Nitritation: The initial step involves the oxidation of ammonia into nitrogen dioxide or nitrites. Nitrosomonas are the special group of bacteria that participate in nitritation. This reaction uses an enzyme system, i.e. ammonium monooxygenase. The chemical equation for this process is:

Nitration: It is the second phase, which facilitates the oxidation of nitrites (NO2–) into nitrates (NO3–). Nitration involves nitrite-oxidizing bacteria like Nitrobacter and Nitrospira species and an enzyme system of nitrite oxidoreductase (NOR) to complete the process. The chemical equation for this reaction is:

The efficiency of nitrification reaction depends upon the various environmental factors that include:

The nitrifying microorganisms are pH sensitive and require pH between 6.6 to 8.0.  In addition, the microflora participating in nitrification obtain an adequate supply of calcium ions, dihydrogen phosphate and other essential elements in the soil environment.

Although, few nitrifying heterotrophic fungi can directly fix the organic nitrogen to nitrate without oxidizing ammonia, as they are resistant to the soil’s acidic pH due to slime production.

Nitrifying microorganisms are obligate aerobes, which need oxygen to produce inorganic nitrogen like nitrate ions. Nitrification occurs at the optimum aeration porosity between 50-60% of the total soil porosity. The nitrification process in aggregated soil mainly constricts to the outer region due to the speedy diffusion of oxygen into the atmosphere.

Nitrification mainly occurs at an optimum soil moisture potential of −0.3 to −1.6 MPa. In waterlogged or saturated conditions, nitrifying bacteria are not feasible to carry out nitrification. During water stress, autotrophic bacteria are more likely affected in comparison to fungal nitrifiers.

Nitrification includes the autotrophic nitrifying organisms that do not need soil organic matter as either a carbon or energy source.

The population of Nitrifying Organisms

The use of pesticides reduces the efficiency of nitrification due to their toxic effect on soil microbiota. In contrast, tillage increases the rate of nitrification by improving soil aeration.

The nitrification process plays a significant role in agriculture (where it can facilitate nitrate leaching and determine the availability of fertilizer nitrogen) and in wastewater treatment systems (where it prevents groundwater contamination by removing excess nitrogen).