Respiration in plants refers to a process in which a plant utilizes atmospheric oxygen to oxidize glucose and other respiratory substrates like fats or proteins. Respiratory substrates are high energy biomolecules that produce energy, carbon dioxide, and water due to the C-C bond breaks.

Oxidative phosphorylation is the last stage of cellular respiration that occurs in the inner mitochondrial membrane via an electron transport system that also occurs in aerobic conditions. In this context, you would get to know the definition, plant respiration cycle, types and mechanism of respiration in plants.

Definition of Respiration in Plants

Respiration in plants refers to a cellular mechanism that involves the complete combustion of glucose and oxygen into by-products like water, carbon dioxide and energy in the form of heat.

In cellular respiration, some of the energy dissipates as heat, while a plant harnesses some energy for the growth processes. Respiration in plants occurs through stomata and lenticels.

Stomata: It’s a plant’s specialized part present in the epidermis layer of the leaves and stems. Bean-shaped guard cells form stomatal pores and promote stomatal opening and closing during the gaseous exchange. Carbon dioxide and oxygen are the gases exchanged during the daytime.

Lenticels: It appears as a pore in the woody trucks or bark of a tree. Lenticels also allow gaseous exchange between the cells and the environment. It is present in the periderm of the stem. Gaseous exchange occurs during the nighttime.

Plants respire 24 hours day and night to carry out the oxidation of glucose into the by-products like carbon dioxide, water and energy. A plant produces glucose and oxygen during photosynthesis by converting carbon dioxide and water under the action of sunlight and chlorophyll. The plant respiration follows the pathway as given in the diagram. 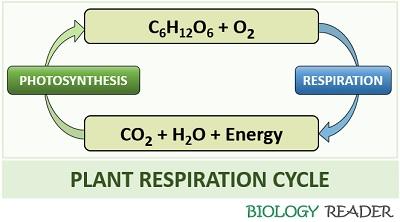 Cellular respiration in plants involves three major pathways to oxidize glucose into energy (ATP). In plants, ATP formed during cellular respiration serves as the “Energy currency” that helps in the forming and functioning of different cells.

It involves glycolysis, Krebs cycle and electron transport system for the complete oxidation of a glucose molecule into 38 ATP molecules. The whole process of cellular respiration is depicted in a diagram: 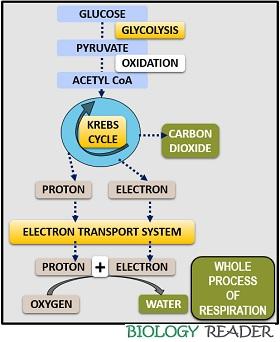 In cellular respiration, glucose first oxidizes into pyruvate by a series of enzymes. Then, pyruvate undergoes oxidation and converts into acetyl coenzyme-A by an enzyme pyruvate dehydrogenase.

The acetyl coenzyme-A enters the Kreb’s cycle and oxidizes to carbon dioxide, protons and electrons through the combination of different enzymes. To know more about glycolysis and the Krebs cycle, one can look at the article difference between glycolysis and Krebs cycle.

Then, the protons and electrons released during the Krebs cycle participate in the electron transport system. The oxygen accepts an electron and combines with a proton to release a water molecule. 38 ATP molecules are produced per glucose molecule after the completion of cellular respiration.

Types of Respiration in Plants

Based on the oxygen requirement, respiration in plants is categorized into two types: 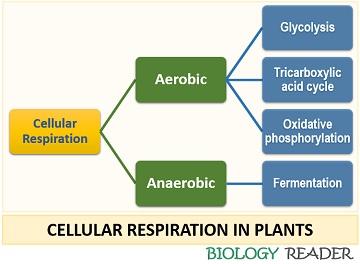 It occurs in the presence of atmospheric oxygen. A plant uses oxygen for oxidizing high energy organic compound (glucose) into low energy molecules (like water and carbon dioxide). Aerobic respiration in plants releases a high amount of energy, which the plants utilise to drive ATP synthesis.

The ATP further breaks down into ADP and inorganic phosphate and releases energy. Plants utilize the energy to perform cellular functions. Aerobic respiration occurs in the mitochondria with a net production of 38 ATP molecules by the complete oxidation of one glucose molecule.

It is intramolecular respiration that occurs in succulent plants like cacti, meristematic tissue, and germinating seeds. It occurs in the absence of oxygen. Anaerobic respiration results in incomplete oxidation of the respiratory substrates into carbon dioxide and ethyl alcohol by releasing little energy.

Like other living organisms, plants also need oxygen to respire and produce energy. Then, a plant supplies energy to the different parts. In plants, respiration occurs in the roots, stems and leaves. Root hairs, stomata, lenticels are the respiratory parts through which a plant facilitates gaseous exchange. 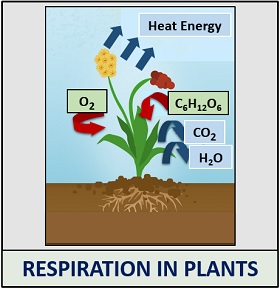 The soil must not be soggy, or soil with excessive water can block free oxygen availability in the soil. There is no oxygen requirement during seed germination in the initial stage, as the testa or seed covering does not allow oxygen to enter.

Thus, both stomatal pore and lenticels allow the entry of oxygen inside the plant’s intercellular spaces and release carbon dioxide into the atmosphere.

1 thought on “Respiration in Plants”