The difference between ATP and ADP is primarily due to the three factors like their energy state, the number of phosphate groups and the hydrolysis process. ATP is comparatively a high energy molecule than the ADP.

There are three phosphate groups in ATP, while two in ADP. A cell needs energy to perform different tasks, for which it hydrolyzes ATP into ADP and later into AMP. Both ATP and ADP molecules are the two universal power sources, which mediate various biological or cellular functions.

This post describes the definition, structure and concept of ATP and ADP, along with the comparison chart. In addition, the key differences and similarities between the two have also been explained.

The active form of adenosine tri-phosphate contains a combination of ATP molecules with Mg2+ or Mn2+ ions. It serves as the energy source necessary for all the life forms, which fuels different cells to promote specific functions. ATP mediates intracellular energy transfer.

ADP also mediates the intracellular energy flow. It is also known as adenosine pyrophosphate. ADP refers to the product formed by the ATP dephosphorylation via an ATP synthase. 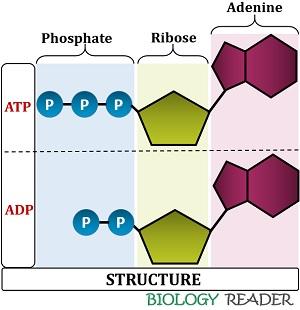 We could understand the concept of ATP and ADP by taking the following references:

Key Differences Between ATP and ADP

Despite many differences, they also share some common features:

We can conclude that a cell needs both adenosine triphosphate and adenosine diphosphate as a source of energy to drive many cellular functions like respiration, digestion, muscle movement etc. ATPase enzymatic activity causes a constant interconversion of ATP, and cellular respiration aids in a continuous regeneration of ATP to fulfil the energy requirements of the living cells.