Mitotic division shows a pattern of cell division, where a single cell multiplies into two similar daughter cells by the segregation of newly replicated chromosomes in the nucleus. It is the intermediate phase of the cell division that activates after the G-2 interphase and ends with cytokinesis.

Mitosis is a part of the M-phase cell cycle, which refers to a combination of karyokinesis and cytokinesis. There is no visible cell growth during the mitotic cell division, and a cell uses all its cellular energy to undergo cell division.

The term “Mitosis” was given by a scientist named “Walther Flemming” in the year 1882 from a Greek work “Mito”, which means thread. Sometimes, the term mitosis is interchangeable with the terms like Karyokinesis or equational cell division. In this context, we will study the definition, stages and importance of mitotic cell division.

The mitotic division refers to eukaryotic cell multiplication, which first carries out the nuclear division followed by cytoplasmic division and forms two identical progenies. The resultant progenies possess the same set of chromosomes as of parent. It occurs during the M-phase of the cell cycle that involves karyokinesis as well as cytokinesis. 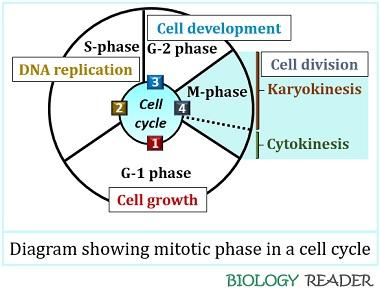 Where does Mitosis occur?

Mitosis or mitotic division is a process of cell division, limited to the animal’s somatic or non-reproductive cells and vegetative plant cells. It does not occur in the animal’s reproductive or germ cells (sperms and ova) that undergo the meiosis division phase. Mitotic division generally occurs in the diploid animal cells, whereas it also occurs in the haploid cells of plants.

It refers to a process of nuclear division, which results in a chromosomal separation of the genetic information contained in a chromosome between the two daughter nuclei. Karyokinesis includes the four sub-stages:

It is the first stage of karyokinesis, which facilitates specific changes within a cell. Chromatin fibres coil to form chromosomes that further undergo duplication. As a result of duplication, the chromosomes condense and appear as two wrapped threads.

Thus, the chromosomes possess two thick and short sister chromatids, having a rod shape. Apart from chromatids appearance, the degeneration or breakdown of a nuclear membrane and nucleolus occurs. 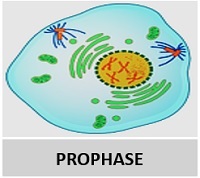 As a result of membrane breakdown, the chromosomes enter the cytosol. The microtubules like kinetochore tubules form a constricted region or centromere that unites the two sister chromatids.

Prometaphase: During this phase, a nuclear membrane subsides into small vesicles inside a cytosol. The chromosomes further condense and get shorter and wider.

Then, the protein structures or microtubules penetrate from the centrosome having a pair of centrioles to form the polar fibres or mitotic spindles.

The polar microtubules expand from the end of the cell to the cell’s equator and finally join the kinetochore. The kinetochore forms centromere that attaches with the chromosomal kinetochore fibres.

Late Metaphase: During this phase, the chromosomes shift towards the centre of the central line by forming a metaphasic plate. “Congression” refers to the stage during which the alignment of the chromosome on a metaphase plate occurs. 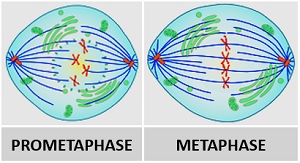 During early anaphase, a centromere connecting two sister chromatids tends to split longitudinally due to spindle fibre contraction. As a result, the chromatids move apart by forming “Full or daughter chromosome”.

On further contraction of spindle fibre, the chromosomes tend to move towards the cell’s pole and may appear in various shapes like J, V, I etc. 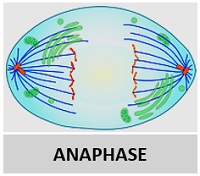 The shifting of chromosomes towards the opposite pole cause condensation of kinetochore fibres. During late anaphase, the spindle fibres completely degenerate.

In this stage, the chromosomes towards the pole start to uncoil themselves and become elongated by water absorption. The nuclear membrane and nucleolus start to appear surrounding the chromosome. During the late telophase, it completely reappears. Telophase results in the emergence of two nuclei in a single cytoplasmic cell. 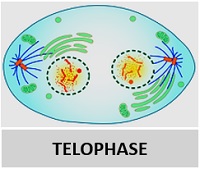 It is the process of partitioning the cytoplasmic components into two new genetically identical cells. The method of cytokinesis differs in animal cell and plant cell. 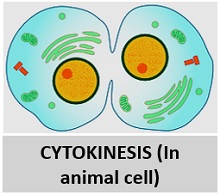 The energy released by the contraction is used by a cell to form a fissure. A GTPase kinase protein or “Rho-A” directs the assembly and function of the contractile ring. The congression of an actin filament is directed by the Rho-A factor, which activates formins.

A Rho-activated kinase rock functions as an effector molecule that promotes the congression of myosin-II filaments. The phosphorylation of GTPase cause contraction of actin and myosin-II filaments and results in the formation of a cleavage furrow that eventually divides a cell into two identical progenies.

Cytokinesis in plant cell occurs via the origination of the cell plate in the middle of cytosol. Assembly of microtubules along with actin filament vertical plane develops a cell plate. 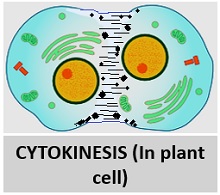 Some membrane sac structures like lysosomes, peroxisomes etc., also assemble with an array of microtubules and fuse to form a structure commonly referred to as “Phragmoplast” or “Cell plate”. A cell plate eventually divides the cytoplasm of a plant cell into two new similar cells.

The mitotic division is an important process that serves as the basis for cell growth and maturation to build a multicellular framework through the division in unicellular cells. It helps in the replacement of existing old and injured cells by the regeneration of newly developed cells.

Mitotic division forms a basis for developing unicellular organisms like a hydra, in which a bud forms that eventually detaches to develop a new vegetative body. Therefore, it is a means of vegetative propagation in the plants.

The mitotic division promotes cell maturation and multiplication of germ cells and makes them ready for the process of meiosis. It results in two genetically identical or qualitatively and quantitatively identical progenies similar to the parent cell. Thus, it maintains genetic stability.