We will discuss the key differences between the pectoral and pelvic girdle along with the comparison chart in this context. You will also get to know the definition and components of both the girdles. 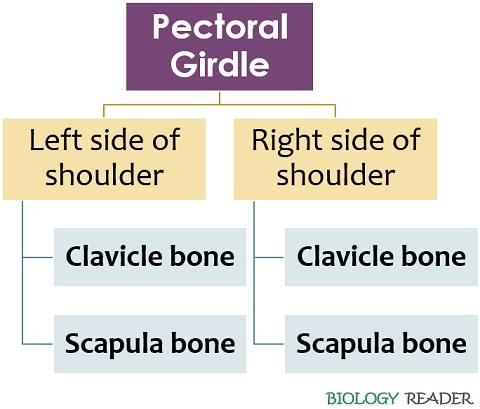 Clavicle: It is a collar bone, which appears S-shaped. It lies in an anterior side of the shoulder. It is the longest bone, which lies horizontally. Clavicle laterally supports the scapula, as the lateral end of the clavicle is joined to the posterior ridge of the scapula (coracoid process) via coracoclavicular ligament. It possesses three regions like the sternal end, acromial end and shaft.

Scapula: It is also termed as shoulder blade or blade bone, which lies a posterior side of the shoulder. Scapula possesses two ridges, namely the coracoid process and spine of the scapula.

There are three depressions called fossae, in which two fossae (supraspinous fossa and infraspinous fossa) are present posteriorly, and one fossa (subscapular fossa) is present towards the anterior side. Fossae increase the surface area for the forelimbs attachment.

It is defined as the bone connecting the hindlimbs to the axial skeleton. Unlike pectoral girdle, it only comprises hip bones or coxal bones. In humans, there are two hip bones. Coxal bones serve as an attachment point of both the hind limbs. 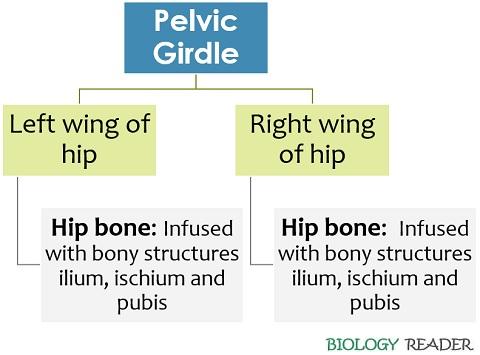 Unlike the pectoral girdle’s bones (function independently), the pelvic girdle’s coxal bones unite firmly to form a weight-bearing and immobile structure. Thus, it serves as a strong base above which the upper body rests. The left and right coxal bones inferiorly attach to the two other bones (sacrum and coccyx).

Therefore, we can conclude that both pectoral and pelvic girdle are the bones which connect the appendicular skeleton to the axial skeleton. The appendicular skeleton includes the bones of forelimbs and hindlimbs, whereas the axial skeleton consists of the vertebral column’s bones. Thus, girdle forms the ball and socket joint for the forelimbs and hindlimbs to facilitate movement and locomotion.