The difference between polyp and medusa relies upon motility and shape. Members of the phylum Cnidaria have two different forms of individuals or zooids (polyp and medusa). Polyps are the sessile or fixed individuals, while medusae are motile or free-swimming zooids.

Polyps appear more or less cylindrical, whereas medusae appear umbrella-shaped. Cnidarians can exist as polyps or medusae as adults and planulae as larvae. The majority of members belonging to the phylum Cnidaria exhibit polymorphism.

Polymorphism is a property through which organisms exhibit more than one type of individual in their life cycle, which are structurally and functionally different. Some Cnidarians have both the individuals (polyp and medusa) during their life cycle.

Cnidarians of the class Anthozoa, only have a polyp body form. But, hydrozoans, scyphozoans, and cubozoans alternate generations between polypoid and medusoid body forms.

This post highlights the key differences between polyp and medusa, along with the comparison chart. You will also get to know the definition, examples and modifications between the two.

Polyps are individuals having a tubular body shape with a free upper end and fixed bottom end. They can be solitary (like sea anemones) or colonial (as in corals).

Anthozoans have a tubular stomodaeum that extends from the mouth down into the gut. They reproduce asexually by budding.

But sometimes, polyps are associated with the sexual generation, in which they modify into medusae.

Medusae are individuals that appear more of an umbrella or bell shape, with the mouth and tentacles hanging down. They are free-swimming animals that float along water currents by rhythmic muscular contractions of the bell. A medusa represents a typical body plan of jellyfishes.

Three classes (Hydrozoa, Scyphozoa, and Cubozoa) of the phylum Cnidaria alternate in their life cycles. Members belonging to such classes switch between polypoid and medusoid body forms.

In the members of the class Scyphozoa, the population of medusa predominates. In contrast, the polyp population predominates in hydrozoans and Cubozoans.

Polyp produces the jellyfish-shaped medusae asexually, and medusae produce the sperm and eggs. The fusion of sperm and egg turns into a zygote that later develops into Planula larvae.

Important: Medusae release male and female gametes underwater. Thus, they follow external fertilization, as the fusion of gametes occurs outside the body.

Planula larvae settle on a solid surface in polypoid forms. They can bud off into polyps via asexual budding. But, the planula larva may transform directly into the medusa in a few Cnidarians.

The body wall of a polyp has an outer ectoderm layer and an inner endoderm layer. A thin, gelatinous layer called mesoglea is present between these two layers. The outer and inner layers secrete mesoglea that contain skeletal elements. The body of a polyp has two distinct ends. 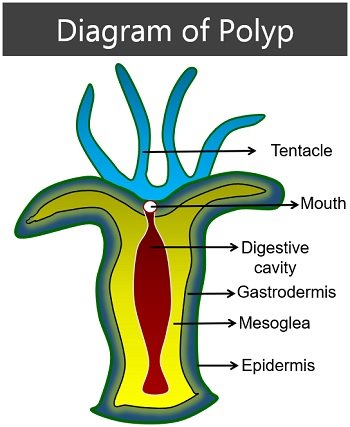 The body wall of a medusa also has outer ectoderm, inner endoderm and a thick mesoglea in between. The body of a medusa has a central bell and marginal tentacles. 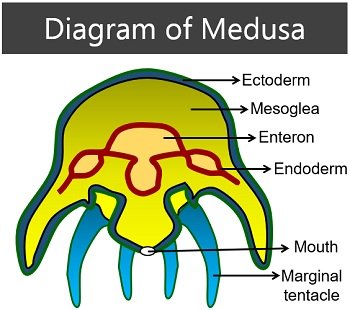 Key Differences Between Polyp and Medusa