Phylum Porifera is placed in the kingdom Animalia and regarded as the oldest animal group. The term Porifera merely refers to pore bearers that include Poriferans or pore bearing animals. Poriferans or sponges possess small pores on their entire body and some wide openings. The members of Phylum Porifera are metazoans that show a cellular organization, i.e. lack tissues and organs.

An asymmetrical body is the characteristic feature of all sponges. There are approximately 5000 species in the phylum Porifera. Poriferans are simple invertebrates (lack bony structures). The majority of them are marine. Calcarea, Hexactinellida and demospongiae are the three major classes of the phylum Porifera.

Initially, they were thought to be in the Plantae kingdom because of the green colour and symbiotic relationship with algae. On further research about their life cycle and feeding system, they were included in the kingdom Animalia. This post describes the definition, characteristics, classification and anatomy of the Porifera or Sponge.

Porifera is a phylum of kingdom Animalia that includes pore-bearing species with a spongy texture and no plane of symmetry. They are the first multicellular invertebrates that lack a division of labour or the presence of well-developed tissues and organs. 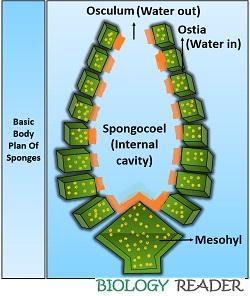 Poriferans or Sponges possess a spongy appearance. The multiple minute pores in the poriferans are termed ostia, while a common large pore is called the osculum. Poriferans have no fixed shape, and all possess an internal skeleton and a large cavity in between called spongocoel. It includes members like Sycon, Spongilla, Euspongia, etc.

The phylum Porifera possesses some unique features than the other multicellular organisms, which we will discuss below:

All the poriferans are free-living aquatic animals. The majority of them exist in marine habitats except for the members belonging to the family Spongillidae, which live in freshwater lakes and streams. They can thrive in shallow ocean environments to depths as great as five kilometres.

The mature sponges are sessile and sedentary, i.e. they are permanently affixed to the solid substratum like clamshells and rocks. Like plants, they cannot move here and there or attach firmly to the sea bed. Their body shape is non-uniform and asymmetrical.

The outer surface is punctured by innumerable pores or ostia that provide channels for the entry of water. Also, there are a few wide openings called oscula that spill excess water. In several freshwater sponges, the contractile vacuole is also present. Thus, sponges can absorb and withhold fluids.

Sponges are the lower multicellular organisms without having distinct tissue and organ system. They are cellular and diploblastic organisms. Their body wall divides into an outer pinacoderm (derived from epithelial cells) and an inner chaonoderm (derived from endothelial cells) by having a mesenchyme layer in between. Sponges deprive an excretory, respiratory, and circulatory system. They possess sensory cells, but not a well-differentiated nervous system.

Paragaster or spongocoel is an interior space of porifers, which appear as a hollow cavity. Sometimes, it is infused with several canals lined by collar cells with a thread-like flagellum.

They lack a mouth and digestive cavity. Amoeboid cells in the mesenchyme layer mediate the movement of planktonic food and water throughout the body. The mechanism of digestion is intracellular, occurring inside the food vacuole of collar cells. Thesocytes store the food content.

Sponges eject sperm and ova synchronously into the water. sperm reaches the ova via archaeocytes. If gametes fuse from the same species, they form a larval sponge that undergoes planktonic drifting and matures into an adult sponge. Larval sponges colonize on suitable locations, and adult sponges remain sessile throughout their lifecycle.

Fertilization is generally internal that occurs in the mesenchyme. However, cross-fertilization can also take place. The process of development is also indirect by a free-swimming, ciliated-larva called amphiblastula or parenchymula. Cleavage is generally holoblastic.

The sponges can regenerate as colonies from a detached cell.

Certain species of shrimp, echinoderms, live symbiotically inside the chambers of sponges and feed on the particles flowing through the chambers. Through this association, sponges neither get benefitted nor harmed, and their symbionts gain benefits. Thus, they show commensalism.

Epithelial cells form an outer body, which provides protection and flexibility to all sponges. All sponges share a characteristic feature in common by having pores that give the phylum its name.

Tubular epithelial cells (porocytes) form the pores that facilitate the exchange of water and planktonic food and oxygen from the surroundings inside the cavity. The water enters the ostia and exists via the oscula. 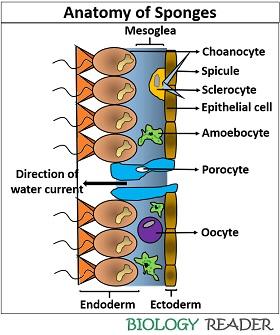 Collar cells or choanocytes are the tubular structures that form the inner surface of the porifers and possess flagella. The back and forth movement of flagella maintain steady water flow to bring food and oxygen into the ostia and remove wastes through the osculum.

The fine tubular collar cells filter the suspended planktonic food and pass it to the amoeboid cells for digestion. For this reason, sponges are regarded as filter feeders. A jelly-like or gelatinous material exists within the outer epithelial and inner collar cells.

Therefore, we can conclude that sponges were the first multicellular organisms whose body organization only contains cells that carry out different physiological processes of porifers. The members of Porifera deprive distinct tissues and organs system that perform different tasks.