Length: The length of the small intestine is 9 m which is larger in comparison to the large intestine whose length is about 1.5 m.

Diameter: The diameter or width of the small intestine is 3.5-4.5 cm which is smaller than the large intestine whose diameter is about 4-6 cm.

The small intestine is the region which finds as the coiled tube in the abdominal region and comprises of three components from the proximal end to the distal end.

The small intestine subdivides into three parts namely duodenum, jejunum and ileum. It performs several functions in the abdominal region like digestion of food, adsorption of nutrients etc.

The large intestine can define as the part of the intestine which extends from the appendix to the anus. It is a wider and short tube with a sacculated wall surface.

The large intestine is the region which frames the coiled tube (small intestine) in the abdominal region and comprises of four components. 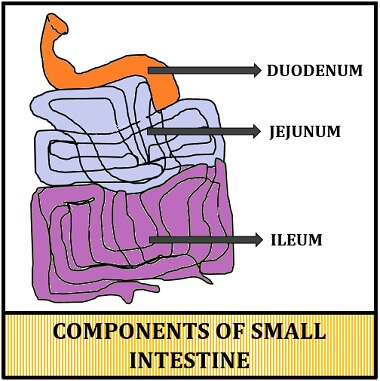 Duodenum: It is the first part of the small intestine which is the shortest region of 25.4 cm. Duodenum begins from the pyloric sphincter. It bends posteriorly behind the peritoneum. Then duodenum forms a C-shape around the pancreas. Duodenum then again bends and returns to the peritoneal cavity and joins with the jejunum. The ampulla is the region which opens into the duodenum.

Ileum: It is the longest part of the small intestine which measures 1.8 m length. The ileum is thick and developed into mucosal folds. It joins the cecum of the large intestine to the ileocecal valve. The ileum is located at the posterior abdominal wall.

Cecum: It is the first region of the large intestine which is sac-like. The cecum is inferior to the ileocecal valve. It measures the length of 6 cm. vermiform appendix attaches to the cecum which comprises of lymphoid tissues.

Colon: It moves upwards on the right side of the abdomen will refer as “Ascending colon”. Then the colon slightly bends and will refer as “Transverse colon” where it forms right colic or hepatic flexure. Colon then moves towards the left side of the abdomen and bends sharply to form left colic or splenic flexure. Colon then moves downwards or in descending order and will refer as “Descending colon”. Then colon inferiorly enters to the pelvis and forms a “Sigmoid colon” which extends medially.

Rectum: Sigmoid colon enters the rectum which then extends anteriorly to the sacrum and coccyx. Rectum consists of rectal valves composed of three lateral bends of transverse folds. Its primary function is the separation of faeces and gas to prevent simultaneous release.