Neurotransmitters refer to the chemical messenger molecules, which contain amino acids, amines, purines and neuropeptides. Its activity may trigger or restrict nerve impulse production. Its synthesis occurs endogenously by the presynaptic neuron.

Neurotransmitters release out upon membrane stimulation. They ensure neurotransmission by transmitting an action potential beyond the chemical synapse.

Our nervous system uses neurotransmitters as the carrier molecules, which trigger the opening of voltage-gated channels after binding with the neuron’s specific receptors. By doing so, they allow the movement of ions beyond the membrane, which eventually stimulate the action potential to move althrough the axon.

In this post, we will study the definition, location, function and three common types of neurotransmitters (excitatory, inhibitory and modulatory). In addition, some ideal properties, important facts and features have also been explained. 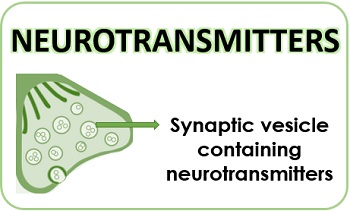 The neurotransmitter comes into action once the synaptic vesicles rupture after coming in contact with the plasma membrane. The fusion causes the release of chemical messengers, which can either excite or inhibit the nerve signal transmission towards the adjoining neuron. The chemical messengers bind with the corresponding receptors of the postsynaptic neuron.

Neurotransmitters are packaged within the small spherical bundles known as synaptic vesicles. They are found towards the periphery of the axon’s endings. In chemical synapses, the synaptic vesicles are small and round, whereas the vesicles exhibit pleomorphic shape in electrical synapses.

Based on the functional role inside a nerve cell, a neurotransmitter is typically grouped into the following classes: 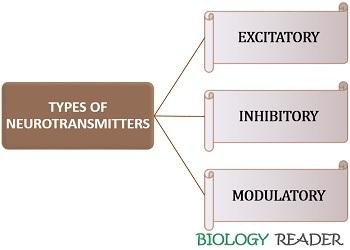 From the name, it’s quite clear that this kind of chemical messenger will excite or promote an action potential to move beyond the presynaptic neuron. In simple words, the excitatory neurotransmitter can persuade the target cell or neuron into action.

Besides, they can also modulate the transmembrane ion flow through different channels and facilitate nerve signal generation and propagation.

They are the chemical messengers that hinder the firing of an action potential across the presynaptic membrane. Merely, an inhibitory neurotransmitter can dissuade the target cell or neuron into action. They do not facilitate the generation and propagation of a nerve impulse.

A chemical messenger (for example, GABA) acts as an inhibitory neurotransmitter, activating anion channels (like Cl–) and cause hyperpolarization. They also include chemical messengers like GABA, taurine, acetylcholine, dopamine.

They function as neuromodulators, which regulate the functioning of other neurons. Some of the neuromodulators include dopamine, histamine, and acetylcholine.

Neurotransmitter performs the following tasks in a nervous system. 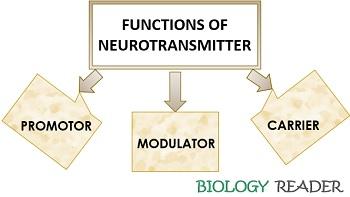 Neurotransmitters share the following characteristics and facts that are mentioned below:

To recognize the neurotransmitter, the following points you should keep in mind.

What do Neurotransmitters do?

The synaptic vesicle possesses thousand of neurotransmitters towards the bulbous endings. The axon’s terminal region serves as the active zone of a neuron. The moving down of action potential results in a fusion of synaptic vesicles with the axon’s plasma membrane.

As a result of integration, the chemicals messengers disperse beyond the membrane and bind with the receptor sites of the postsynaptic neuron. The receptor proteins bring out certain modifications in the chemical messenger by activating ion channels.

The cell receptors also mediate the transformation of chemical information into electrical form. After regulating ion channels, the binding of neurotransmitter and receptor exhilarates ion fluxes beyond the membrane.

Depending upon the type of channels and ions fluxed into the membrane cause depolarization or hyperpolarization. A depolarized state in which an inner membrane possesses positive charges. 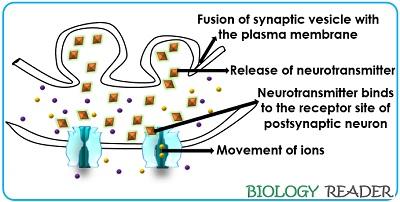 A hyperpolarized state is an inner layer, which possesses negative charges due to the influx of chloride ions via chloride gated channels. If a cell reaches a threshold of depolarization, it will trigger the influx of more electropositive sodium ions into the electronegative cytosol via sodium voltage-gated channels.

Then, depolarization of the membrane stimulates the propagation of an action potential. When an action potential reaches the region of bulbous swelling, the arrival of positive charges triggers the opening of calcium gated channels.

Afterwards, the channels allow the movement of calcium ions into the membrane. The integration of axolemma and vesicles cause the dispersal of chemical messengers into the synaptic cleft, and the process repeats similarly.