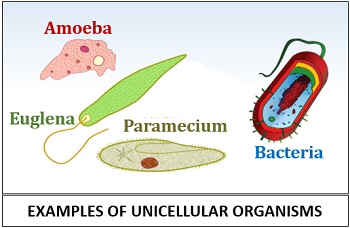 One of the most common features of unicellular organisms is their microscopic nature, i.e. unobservable through the naked eye. They commonly reproduce via asexual methods like budding, fragmentation and binary fission.

But a few reproduce sexually via conjugation (like bacteria and protists). Because of single-cell composition, the cell arrangement is quite simple. They can thrive in extreme heat, acidity, salinity, and other environmental stresses.

They refer to living organisms, which possess multiple cells with distinct cell organelles that perform separate cellular activities or different life processes within a body. It only includes eukaryotic organisms like insects, animals, birds, human etc. 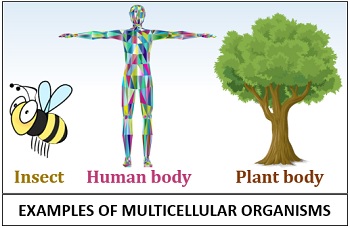 One of the most common features of a multicellular organism is its macroscopic nature, i.e. easily noticeable through the open eye. They commonly reproduce via sexual methods (by the formation of a zygote).

But, few members can grow via asexual means like budding and spore formation. Because of multiple cell composition, it has a composite cell arrangement. Organism’s size increases as the cell number increases.

Therefore, we can conclude that a cell can be unicellular and multicellular type, which undergoes the same life processes like respiration, digestion, excretion etc., to sustain life.

The unicellular organisms have a single cell due to which their function is fully dependent on a single cell only, which eventually reduces the working efficiency and life span of the organisms due to heavy workload.

In contrast, multicellular species possess multiple cells to perform distinct tasks by coordinating different cells and eventually promotes high working efficiency and a long life span due to the division of cell labour.