When a nerve impulse or action potential reaches the axon terminal, synaptic transmission occurs via an electrical or chemical synapse. Speed of impulse transmission varies considerably among different kinds of cells.

The size of nerve impulse remains the same, but its generation and transmission rate differs according to the cell type. The layer of a fatty acid substance called myelin sheath accelerates the rate of signal conduction (up to 20 times faster).

In this context, we will learn the definition, conduction mechanism (continuous and saltatory), and the steps involved in nerve impulse transmission. Besides, the functions of nerve impulse are explained.

Nerve impulse refers to a signal driven by either electrical, chemical or mechanical stimulus onwards the segment of an axon filament. It generates a change in the potential gradient of voltage-gated channels across the membrane, resulted from ionic movement in and out of the axolemma.

A change in potential difference or the change in the phase of resting potential to the action potential leads to the conduction of the signal from one neuron to other. The transmission of nerve impulse generally speeds at 0.1-100 m/s.

Factors like the temperature, axon diameter, and presence or absence of myelin insulating layer influence the rate of impulse transmission. All three factors accelerate the pace of signal transmission.

Continuous and saltatory conduction are the two common modes that facilitate the propagation of nerve impulse. 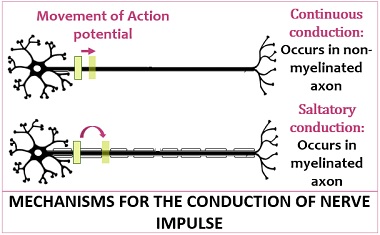 It refers to the non-myelinated conduction, where the flow of nerve-impulse is slower (0.1 m/s). It occurs in unmyelinated axons, where the ions flow throughout the axon segment via voltage-gated channels.

It refers to the myelinated conduction, where the action potential plunges much faster (100 m/s) from one node to another. It occurs in myelinated axons, where the flow of ions is discontinuous because of the uneven distribution of voltage-gated channels.

The signal propagation is faster in saltatory conduction as the nerve impulse plunges from one node to the next and reaches the target cell more quickly than the continuous conduction. Let us consider:

Like a flow of current requires a specific voltage, the generation of nerve impulse also involves a change of resting membrane potential to the state of action membrane potential, for which the stimulus must reach the threshold value maximum of -55 millivolts.

As the voltage reaches the unit required for the flow of electrons, it conducts the current flow. Similarly, in neurons, a physical, electrical or mechanical stimulus must have the threshold value, which can cause the movement of ions beyond the axolemma by opening the voltage-gated channels.

As the flow of electrons permits the passage of current along the electrical wire, a sudden change in the membrane potential also initiates the conduction of nerve impulse althrough the axon’s length.

As the current flow is faster in a broader electrical loop, nerve impulse conduction also depends upon the axon’s diameter, which means the flow of action potential will be faster on a broader axon than in a narrower one.

A neuron conducts the transfer of an action potential or nerve impulse through the following stages mentioned below: 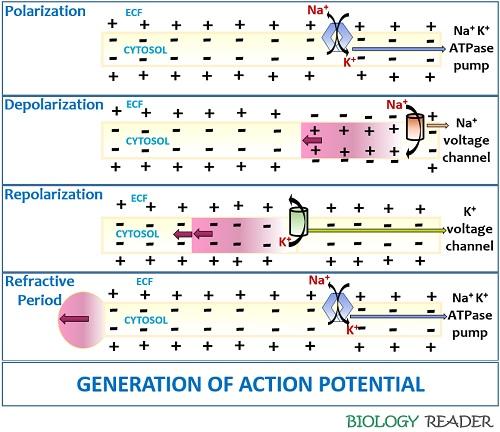 It is a state of resting potential, which is electrically charged but non-conductive. The concentration of sodium ions in the extracellular fluid is about 16 times higher than the axon’s cytoplasm or axoplasm.

In contrast, potassium ions inside the axoplasm are 25 times higher than the extracellular fluid having sodium ions. Polarization of membrane refers to the“Unstimulated state”.

During this state, the axolemma is more permeable to the potassium ions rather than sodium ions. As a result, rapid diffusion of potassium ions occurs than that of sodium.

The electronegativity of the membrane-potential changes once a stimulus increases the influx of sodium electropositive ions (more than ten times) into the axoplasm by allowing the Na+– voltage-gated channels to open.

Here, the movement of an action potential depends on the mechanism of the “All or none” method, which has the following two possibilities:

It is the stage of restoring the electrical balance inside and outside the cell membrane. The high concentration of sodium ions inside the axoplasm will trigger the K+– voltage-gated channels to open.

Therefore, this step maintains or restores the original membrane potential. By the time the potassium voltage-gated channel closes, more of the potassium ions cross the membrane to establish initial polarized potential. As a result, a cell membrane becomes hyperpolarized by having a potential difference of -90 mV.

It is the final stage, where the membrane potential re-establishes the original distribution of sodium and potassium ions through the sodium-potassium ATPase pump. The Na+– K+– ATPase pump facilitates the conversion of the cell membrane again to its resting-potential state.

Here, a cell can respond to the new stimulus. It aids the influx of two K+ and efflux of three Na+ ions across the selective membrane by the ATPase activity. This stage lasts for two milliseconds.

When a nerve impulse reaches the axon’s synaptic terminal, it gets transmitted from one neuron to the next through a phenomenon known as “Synapsis”.

The transmission of the signal involves joining the axon terminal of one neuron (Presynaptic neuron) to the dendrite of another neuron (Postsynaptic neuron). “Synaptic cleft” refers to the little space (0.2 µ) in the middle of pre and post-synaptic neuron. 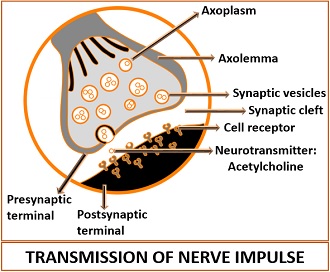 The specialized neural network helps in transmitting the signal from CNS to the peripheral body parts and vice versa. Neurons appear as a dense network of long fibres, where the information is passed from the axon terminal of one neuron to the dendrites of another neuron and finally to the target cell.

Therefore, we could take the following references to understand the distinct role of all the neuron components.

A cell body carries the message and conducts it to the filamentous axon through an axon hillock. An axon plays a most critical role by conducting the signal to the target cell via synapses. The conduction of the message can be continuous or saltatory.

A neuron terminates on one of the three target cells like muscle, gland and another neuron, which causes muscles to contract, glands to secrete and neuron to transmit the action potential.