Apart from many differences, roots and stems are the structures that share some similarities like:
The occurrence of vascular tissues: Both root and stem possess vascular tissues, i.e. xylem and phloem.
Branching: Both can initiate lateral growth to form branches.

Roots refer to a root system that grows downwards the plant axis or subterranean to the soil surface. It originates from the radicle of the growing seed as primary root and later gives off lateral branches as secondary or tertiary roots. A layer of epidermis surrounds the root surface and typically consists of three zones.

It lies at the topmost region of the root system and comprises several outgrowths or unicellular root hairs. A permanent zone helps in anchoring and transporting nutrients to the plants.

lies between the piliferous region and meristematic zone, and its functional role is to promote root length.

lies between the elongation zone and root cap. The meristematic cells undergo multiple cell divisions and differentiate into three layers:

The dermatogen layer produces a root tip or root cap. A root cap performs a primary function by giving protection to the apical meristem against harsh soil particles. It has the capacity to regenerate. In aquatic plants, instead of the root cap, a loose root pocket is present.

Stems refer to a shoot system that grows upright to the plant axis or superterranean to the soil surface. It originates from the plumule of the growing embryo as the primary stem and later gives off lateral branches as secondary or tertiary stems. 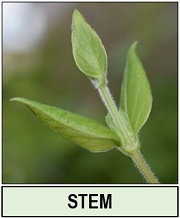 Stems bear nodes (give rise to the formation of leaves) and internodes (separates two nodes). Stems also bear buds that can be terminal and lateral in position. A terminal bud or “Apical bud” grows towards the tip, and a lateral bud or “Axillary bud” grows laterally towards the axil of a leaf.

Key Differences Between Root and Stem

Therefore, we can conclude that a plant could not thrive without the working of roots and stems as both perform different roles to maintain the plant physiology.