The electron transport system is present in the inner mitochondrial membrane of mitochondria. It also refers as “Electron transport chain” and “ETS” in abbreviated form. ETS involves a transfer of electrons through a series of protein complexes from higher (NADH+) to lower energy state (O2), by releasing protons into the cytosol. The movement of a proton or H+ from a matrix to cytosol generates a proton motive force and creates an electrochemical gradient. The proton molecules then tend to diffuse down the electrochemical gradient again into the mitochondrial matrix and releases ATP via ATP synthase.

An oxygen atom is the last carrier, which accepts the electron and combines with the free hydrogen ions in the mitochondrial matrix to give water. Thus the oxygen carrier maintains the membrane potential by removing the de-energized from the inner mitochondrial membrane.

The process of electron transport system includes the following steps: 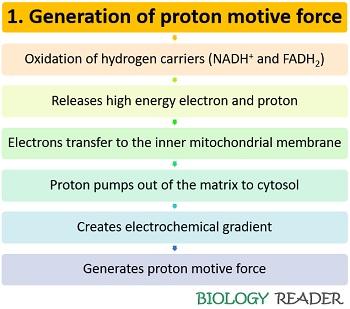 In the first step of the electron transport chain, the NADH+ and FADH2 molecule of glycolysis and Kreb’s cycle is oxidized into NAD+ and FAD, releases high energy electrons and protons. The electron diffuses into the inner mitochondrial membrane, which consists of a series of large protein complexes. The passage of an electron from one carrier protein to others loses some of the energy or ATP.

The ATP is then used up by the complexes to move proton from matrix to the intermembrane space. Thus, the diffusion of a proton across the inner mitochondrial membrane is the process refers to as “Chemiosmosis”, which creates a proton motive force across the electrochemical gradient. 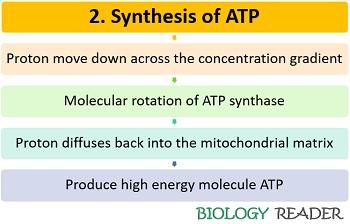 The H+ generates a proton motive force, which helps them to move downhill the concentration gradient of the inner mitochondrial membrane. H+ ion tends to diffuse back into the mitochondrial matrix through the channel protein by the help of transmembrane enzyme (ATP synthase), by producing ATP. 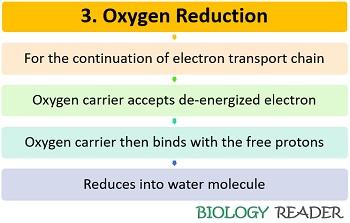 For the continuation of the electron transport system, the de-energized electrons are released out by the help of electron acceptor O2 molecule. The oxygen accepts the electron from the fourth complex and then binds with the free protons. Finally, oxygen gets reduced to yield H2O.

The electron transport system consists of the following elements: 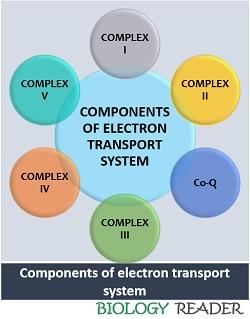 Coenzyme-Q also refers to as “Ubiquinone” that connects the complex I and II. Ubiquinone is a lipid-soluble complex, which can move freely in the hydrophobic core of the mitochondrial membrane. Q reduces into QH2 and delivers its electron to the third complex. Coenzyme-Q receives the electron released from the NADH and FADH2 molecules.

It is composed of “Cytochrome-b” which consist of Fe-S protein with Rieske centre (2Fe-Fs). Complex III also refers to as “Oxidoreductase”. In cytochromes, the prosthetic group is heme, which carries an electron. As the electron passes, the iron is reduced to Fe2+ and oxidized to Fe3+. Complex III or cytochrome-b transfers an electron to the next complex cytochrome c.

Cytochrome-c also contains Fe-S protein and prosthetic heme group. It only accepts one electron at a time and further transports its electron to the fourth complex.

It is composed of Cytochrome a and a3, which contains two heme groups (one in each). Cytochrome-a3 consists of three copper ions (two CuA and one CuB). The function of complex IV is to hold the oxygen carrier firmly between the iron and copper ions until the reduction of oxygen into a water molecule. Oxygen combines with the two proton molecules and releases water by maintaining the membrane ion potential.

It is the protein ion channel which consists of a transmembrane enzyme “ATP synthase” and thus also refers as ATP synthase complex. Complex V allows the passage of proton ion from the high to low concentration, against the potential gradient. The chemiosmotic passage of proton causes molecular rotation of the enzyme  ATP synthase and therefore release energy in the form of ATP. 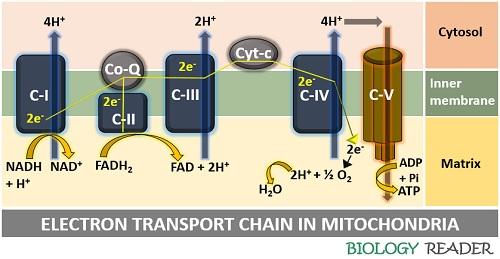 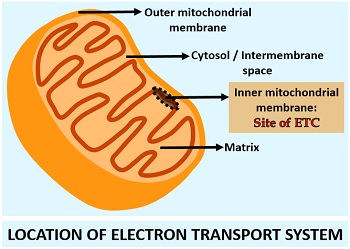 There are four large protein complexes in the electron transport chain that mediates the transfer of an electron from one to the other. In addition to protein complexes, there are individual electron carriers present like Co-Q and Cyt-C. Both Coenzyme-Q and Cytochrome-c are the diffusible electron carriers and can travel within the membrane. Along with that, there is one ion channel protein (ATP-synthase) which mediates the transport of proton down the concentration gradient by producing ATP.

ETS can define as the system of producing energy in the form of ATP via a series of chemical reactions. The ETS is located in the inner membrane of mitochondria and contains electron carrier protein complexes, electron acceptor and channel protein.

Electrons pass from one complex to the other by redox reactions. Some energy produces during electron transfer, which captures as a proton gradient and used up by the ATP synthase to derive ATP.

In ETC, the electrons formed by the reduction of FADH2 and NADH transfers to the electron carrier Co-Q. Coenzyme-Q or Q then reduces into QH2 and then passes its electron to the third protein complex (cyt-b). Complex III contains a heme group, where the Fe3+ accepts electron coming from Co-Q and reduces into Fe2+. 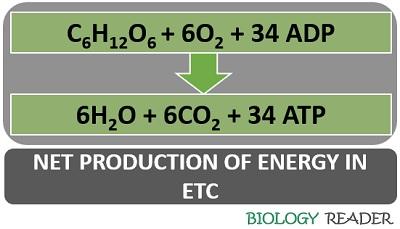 Thus, the net production of energy in the electron transport chain is 34 ATP molecules.