Epifluorescence microscope has prominent applicability in different laboratories, which allow excitation of reactive dyes and detection of the fluorescent light emitted through the same objective.

Therefore, the working of a fluorescent microscope depends upon the reactive species within the fluorescent dye, which absorb photons of the exciting light (low wavelength) and later transmit fluorescent light (high wavelength).

There is a short delay between the excitation and emission of fluorescent light that is generally negligible (takes nanoseconds). This post mainly explains the definition, working and phenomena of fluorescence. You will also get to know the basic components of the fluorescent microscope, along with its advantages and limitations.

It refers to the microscopic technique that uses chemical substances that stain the specimen by absorbing white light of a specific wavelength and emitting light of a longer wavelength to form an image. Fluorescent dyes are the chemical substances used in this advanced microscopic method. Chemical particles within the fluorescent dye come into action under visible light.

The working principle of fluorescence microscopy is summarized below: 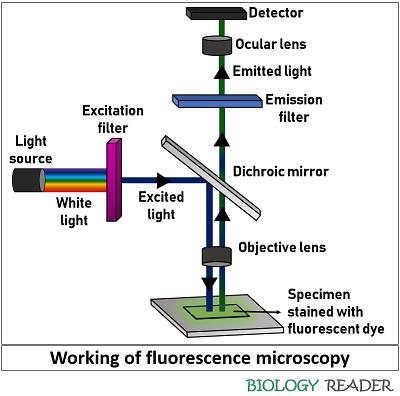 The working of a fluorescent microscope depends upon the principle of fluorescence rather than scattering and reflection of light. Some chemical substances or reactive dyes possess the property of light absorption and emission, which can undergo the fluorescence phenomenon. George G. Stokes was the first to study the mechanism of fluorescence and also coined the term in 1852. 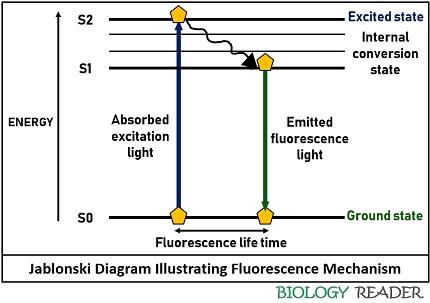 The fluorescence is achieved when the high energy photon molecules in the excited state will go back to their normal ground state by releasing some energy in the form of fluorescence. The difference between the phase of excitation and emission is known as “Strokes shift”, which can be relatively short and sometimes far apart. 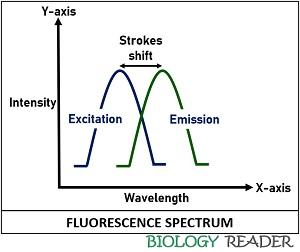 Typical components of a fluorescence microscope are as follows:

Fluorescent dyes: These are the chemical compounds called fluorophore or reactive dyes. Fluorescent dyes possess a property of fluorescence, by which they can form a fluorescent image by emitting highly contrast visible green light after getting excited by the highly illuminating UV light. A fluorophore highlights a wide range of biomolecules like antibodies, nucleic acids, proteins, etc. For instance, Hoechst and phalloidin dyes stain actin fibres in mammalian cells.

Excitation Filter: The excitation filters are designed with high-resolution capacity and interference optics. It passes the light of a shorter wavelength, which the fluorescent dye could absorb. Also, it blocks the other sources of exciting light.

Dichroic Mirror: It is a dichromatic beam splitter that works as an interference colour filter. Thus, a dichroic mirror selectively reflects or transmits light of determined wavelengths. It generally sets at an angle of 45 degrees along the path of light coming from the exciter filter in the fluorescent microscope.

Emission Filter: It has a coloured glass or interference coating or a combination of both. It works as a barrier filter that only permits the fluorophore’s passage and blocks excitation light.

Fluorescence microscopy uses a fluorescent stain, unlike other microscopy techniques that employ ordinary stains. Its working depends upon the excitation of the absorbed light and the emission of the fluorescent light to produce a high contrast image with high resolution.

Thus, the first light of low wavelength having many energy molecules illuminates the sample in fluorescence microscopy. Eventually, reactive species in the specimen excite to emit a second light of longer wavelength having lesser energy content. Here, it is important to note that the filtered emitted light out of total exciting light produces an image.