For the precipitation reaction, polyclonal or multivalent antibodies and antigens are used because the lattice formation will not occur in case of monoclonal Ag and Ab. For a precipitin ring or band’s appearance, the reaction may take a few hours to days. Precipitation test is used to quantify both antigen and antibody, and its specificity also depends upon the concentration of both the reactants.

If anyone’s concentration (either antigen or antibody) exceeds, the immunocomplex will not form. For the reaction to occur, the concentration of both antigen and antibody must be equal, which in turn produce a visible mass of precipitate or lattice. Thus, the end product appears as a precipitate, which can be measured by devices like turbidometer and nephelometer.

Here, we will focus on the definition, principle and methods of the precipitation reaction in solution and agar (by diffusion and electrophoresis) along with the meaning of some important terms relative to this context.

There are specific terms, which we should know before proceeding to the theory of precipitation reaction.

A precipitation reaction is based on the principle of “antigen-antibody reaction”, which occurs at the equivalence zone. At the equivalence region, the ratio of both antigen and antibody is equal, which brings out the formation of lattice or cross-linked structure. In the equivalence zone, cross-linkage occurs between the reactants that result in the formation of the antigen-antibody complex as a visible ring or line of a precipitate. The least soluble antigens and antibodies form a complex at the point of equivalence, whereas the free antigens and antibodies remain as the supernatant.

Based on the type of matrix, the methods of precipitation reaction include:

In this type, the precipitation method is performed in the liquid media or solution. It consists of two methods, namely a ring and flocculation test.

In the ring test, the antibodies which are present in the serum is first taken in the test tube. After that, test antigen is added to the solution. Then, over incubation of the reactants, the precipitation reaction occurs between antigen and antibody and a white precipitate forms at the junction. 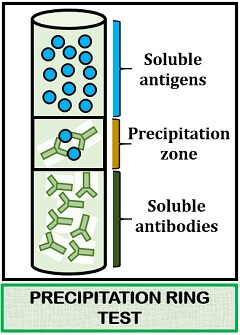 This test can be performed in either of the two ways:

Precipitation in Agar by Immunodiffusion

In this type, the precipitation method is performed in the ordinary media like nutrient agar media. Immunodiffusion takes place through the intervening agar media whose rate is influenced or affected by the following factors like:

The preferred concentration of agar is between 0.3-1.5 percent for the effective diffusion of the reactants to form a lattice. In agar, diffusion takes place by either of the two ways:

It is a type of single immunodiffusion method, which occurs in one dimension. In Oudin immunodiffusion, add antibodies in the molten agar media and pour it into the petri dish. 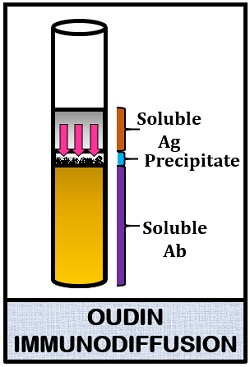 After solidification of the gel matrix, add a layer of soluble antigen. As a result, the incorporated antibodies in the gel matrix will not diffuse, but the diffusion of antigen occurs. The antigen will diffuse towards the antibodies and form a line of a precipitate. 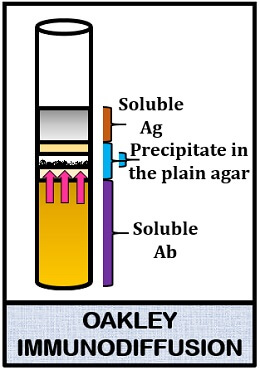 It is a type of single diffusion method, which occurs in two directions. In radial immunodiffusion first, the antibodies in the serum are added in the molten agar media and poured into the glass slide. After the solidification of the gel matrix, create wells and add test antigen into it. 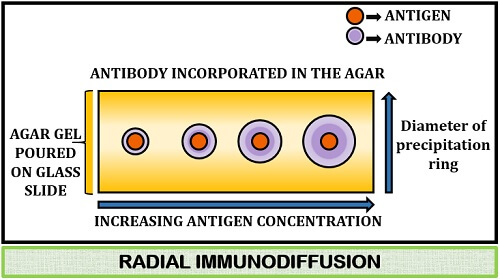 Upon incubation, the antibodies incorporated within the agar gel will react with the specific antigens. A radial diffusion occurs exterior to the well’s surface in the form of precipitin ring. The diameter of the precipitin ring is directly proportional to the concentration of the antigen.

It is a type of double immunodiffusion, which occurs in the two dimensions. In Ouchterlony immunodiffusion assay, add a serum into the agar gel and upon solidification of the gel matrix, create wells. The antigens are then added into the wells. This method is used to compare the homologous antigens (identical, non-identical and partially identical). 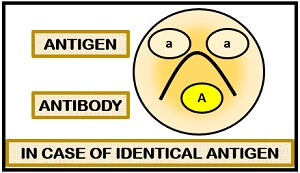 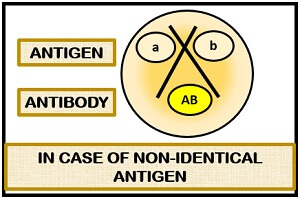 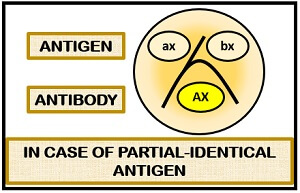 Precipitation in Agar by Immunoelectrophoresis

This type of precipitation method involves diffusion (either in one or two directions) plus the technique of electrophoresis. The immunoelectrophoresis includes the following two methods that are given below:

It is performed on a glass slide, in which the reaction occurs in a single dimension. In Rocket immunoelectrophoresis, the agar is poured that is homogenized with the antiserum. Then, a well is created into which the antigenic suspension is added. 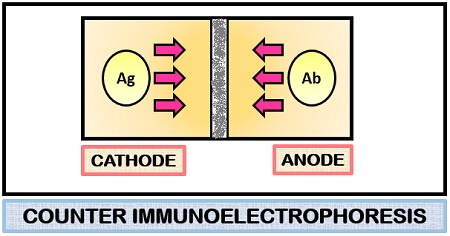