Preliminary treatment of wastewater refers to the pretreatment of raw sewage. Its main task is to eliminate the coarse and large suspended substances from the raw sewage. The suspended materials include floating solids, rags, grits, oil and grease.

The collected raw sewage from the sewerage is pumped to the preliminary setup. And after pretreatment, primary, secondary and tertiary clarifiers treats the running wastewater to make it reusable.

Without pretreatment, the operation and maintenance of the downstream wastewater plant will be difficult. As there may be chances of abrasion of mechanical parts due to clogging of large particles.

So, it becomes necessary to subject the raw sewage to pretreatment. This post discusses the definition, purpose and process of the preliminary wastewater treatment.

Definition of Preliminary Treatment of Wastewater

It refers to the method that removes or reduces the size of solid wastes from sewage that may hamper the effectiveness of further treatment processes. We can also define it as unit operations (like screening, shredding and grit removal) that discharge the liquid wastes for the subsequent treatment.

Pretreatment is an important stage of the STP (sewage treatment plant). The purpose of preliminary treatment targets at the following:

By doing so, it eases the operation of primary, secondary and tertiary setups of the wastewater treatment plant.

It is the initial stage of processing the raw sewage. The sewage influent enters the collection system along with various nuisance materials.

Tree branches, rags, grits, plastics etc. are the unwanted substances found in the influent. If these substances remain in the running sewage influent, they may cause:

So, these undesirable substances must be removed from the sewer system. Preliminary treatment involves the following methods to remove untreatable solids:

It uses screeners. These are the devices having uniform openings to trap the floating and settleable inorganic solids. Screening of solid wastes needs screeners that are available with different pore sizes. Depending upon pore size, screeners are classified into the following types:

Raw sewage first enters the bar screens. After periodic inflows, the debris of raw sewage accumulates behind the bar screen. Then, raking is necessary to pull out the debris from the screens. At last, the collected debris must be disposed of via incineration.

Screenings Disposal: Screenings refer to the debris collected through screeners. Screening materials should be kept in covered containers, otherwise, they may cause:

They may contain organic material, water and inorganic wastes. The disposal is in accordance with environmental regulations. Landfills are the site providing area for the disposal of debris.

Automatic bar screens are provided with a washer or compacter. Compacting debris is important to retain water and organic matter out of the debris. Also, it eases the disposal mechanism.

Depending upon operation, manually cleaned and mechanically cleaned screeners are the two common types.

Small STP uses manually cleaned bar screens. It incorporates a horizontal area at the top for draining. Manual bar screens have bar spacing from ½” to 1 ½”. Cleaning is done manually.

A person has to use a rake to pull out the debris or to clean the screen. This rake with tines fits between bars. The debris is collected in a container for proper disposal.

Here, the cleaning is extremely laborious. Besides, it requires frequent attention, as the collected debris may block the channel.

Large STP uses mechanically cleaned screeners. These are placed vertically at an angle of 45 to 60 degrees. Automated screeners do not require manpower.

It uses a mechanically driven rake. The system has upstream and downstream level sensors. When the screen blocks the debris, the upstream water level rises.

Motorized rack swings down once the difference between upstream and downstream levels reach a predetermined setpoint. After this, the debris automatically pulls out of the chamber into a hopper. Some automated screeners initiate raking sequences based on a timer.

It is a process of reducing the screening’s size that may cause mechanical problems or clogging. Shredders are the special screens that serve the purpose of shredding. Grinders or cutters are the alternative terms of the shredder.

Here, the sewage influent moves across the grinder assembly. The grinder consists of the following components:

Mechanism: Solids go across the screen. Later, the above two cutters chop the solid matter. 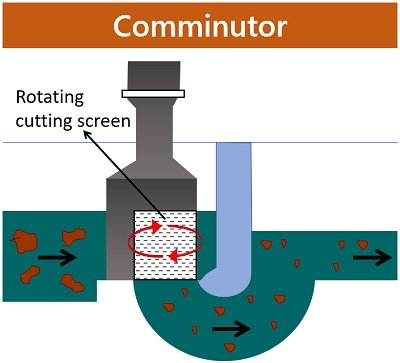 Note: Comminutors do not remove the large solids. As well as, they do not pull the floating objects. We can remove such materials by using our hands.

Comminutors are installed between grit chambers and the primary clarifiers.

It is less frequently used. It requires high maintenance. A barminutor comprises of:

It is the stage that occurs after the separation of large items from the sewage. Grit removal involves the elimination of heavy inorganic solids.

Grits are heavy inorganic solids. They include substances like sand, gravel, metal fillings, cinder, eggshells, etc. which cannot be biological decomposed. It is a common practice to pull gritty substances using a grit chamber. Grit removal is necessary because:

Grit chambers are located before or after the screeners. These exist as long channels. Grit removal depends upon the principle of sedimentation, i.e. the density of the grit.

By applying gravitational force, grit materials settle down. This results due to their high density than the organic solids. Other techniques that work on the separation principles by density difference will also work.

It employs grits chambers or tanks. Here, the flow control devices direct flow velocity. At higher velocity, the gritty materials collect in the suspension of wastewater.

As a result, they make their way to the treatment plant. Grit removal is effective when the velocity of the wastewater is low. So, it needs a velocity between 0.7 to 1.4 foot per second to settle grits at the bottom.

Detention time should be between 2 to 5 minutes. This allows the settling of gritty materials. However, detention time above 5 minutes also allows smaller organic solids to settle. The organic solids require primary treatment, so we should only remove grits from the sludge.

The aeration system performs the rolling action of the air. It accomplishes the grit separation in the following manner:

It is another type of grit removal method. Cyclone degritter is a centrifugal type separator. It causes a rapid spinning action. Its working requires a higher velocity of wastewater between 2 fps to 3 fps. This spinning motion eliminates heavy inorganic solids from the sludge.

All the methods discussed above allows the accumulation of grits towards the bottom of the chamber. Periodic removal of settled grit is necessary.

Some grit removal systems use automated grit removal equipment. While manually cleaned grit chambers are provided with storage space for the deposited grit. The settled gritty material and wastewater is pumped to a grit washer.

Grit washers wash off organic materials and collect inorganic abrasive solids into large containers for disposal. Like screenings, grit materials must be disposed of through landfilling or incineration.

These remove the remaining finer particles from the grit chamber. The construction of detritus tanks requires sufficient surface area.

It has mechanical equipment for cleaning. Here, the settled grit comprises a considerable amount of organic content. We could separate the organics from the grit through one of the following ways: 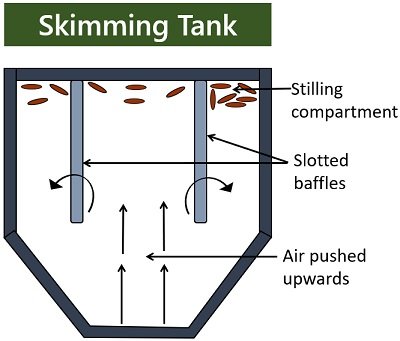 The tank comprises baffle walls that divide the tank. Thus, it has three interconnected compartments. Installation of skimming tanks is necessary, because:

The floor of the tank pushes compressed air upwards. As a result, the rising air bubbles coagulate the grease and oils in the sewage. These materials then enter the stilling or side compartment. At last, we can collect the floating matters through:

The presence of solids (floating matter, sediments, suspended and soluble matter) is an important physical property of wastewater. Sewage comes from multiple sources. It contains 95% of water and 5% of pollutants.

Pollutants could be in the form of inorganic and organic matter. Preliminary treatment focuses to remove all kinds of large inorganic wastes. Further treatment processes involve the removal of organic wastes and the disinfection of water.