The difference between endonuclease and exonuclease is mainly due to the two properties like mode of action and the site of cleavage.

The nuclease is an enzyme that breaks the polynucleotide chain by hydrolysing the phosphodiester bond that holds the nucleotides together. It is mainly of two types, namely endonuclease and exonuclease. In this context, we will study the key differences between the endonuclease and exonuclease, along with the comparison chart. Also, we will discuss the meaning, properties and mechanisms of both the processes.

The term endonuclease can be understood by breaking the term into endo and nuclease, in which a former means interior and a latter stand for the catalyst for the hydrolysis of the nucleic acid. Therefore, the endonuclease enzyme creates a nick between the polynucleotide chain to form oligonucleotides. It does not require free 3′ or 5′ ends to create a nick. These can be either sequence-specific or non-specific.  Sequence-specific endonuclease includes restriction enzymes that create nick at the specific site only, whereas the non-specific endonucleases can cut the DNA or RNA from anywhere in the strand.

The term endonuclease can be understood by breaking the term into exo and nuclease, in which a former means exterior and a latter stand for the catalyst for the hydrolysis of the nucleic acid. Thus, the exonuclease enzyme creates a nick at the ends of the polynucleotide chain, for which it requires free 3′ or 5′ ends. It results in the formation of individual nucleosides. These are sequence non-specific.

Both endonuclease and exonuclease share some similar properties where they show similarities in their function.

Exonuclease first attacks on the phosphodiester bond and removes the nucleotides one by one from the polynucleotide chain. The ends that are overhanging from the strand are called cohesive or sticky ends. After the removal of cohesive ends, both the DNA overlaps to make a complete DNA hybrid or a segment. 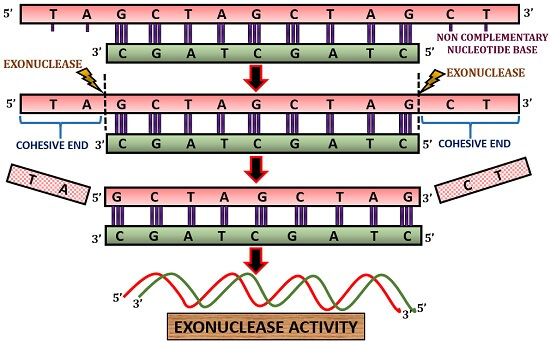 Endo-nuclease first breaks the phosphodiester bond of the mismatched nucleotide bases. Then, it separates the whole mismatched base pairs. After that, endonuclease forms the DNA hybrid with the help of DNA polymerase and DNA ligase, in which a former polymerized the strand and a latter binds the fragment. At last, the endonuclease creates a nick. 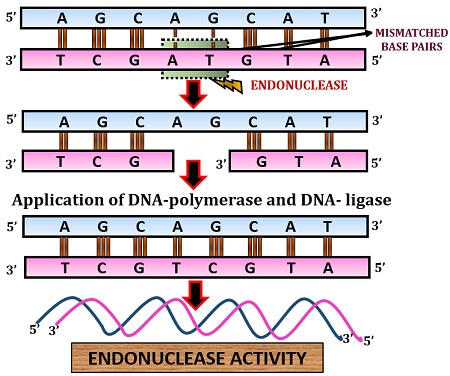 Key Differences Between Endonuclease and Exonuclease

We have discussed the difference in properties, mechanism and the key differences between the endo and exonuclease. Hence, we can conclude that both endonuclease and exonuclease are the enzymes having different activity site for the cleavage. Besides, their main function is to separate the mismatched or wrong nucleotides base, and they play an important role in DNA repair and stabilization.