Gluconeogenesis occurs in a reverse manner of glycolysis, which produces glucose by the precursors like pyruvate, lactate, glucogenic amino acids. It is sometimes called Neoglucogenesis. It is a ubiquitous or universal pathway, which occurs in humans, animals, plants, fungi and other living organisms.

GNG is an acronym for the term gluconeogenesis. It refers to the metabolic pathway synthesising new glucose molecules from the non-glucose substrates like lactate and TCA intermediates. Sometimes, gluconeogenesis also refers to the “Endogenous glucose pathway” as it needs energy input.

The small precursor molecules combine to produce a high energy product like glucose. Gluconeogenesis is an important cycle producing glucose, which serves as a “Key metabolite” to carry out all catabolic processes and sustain life. 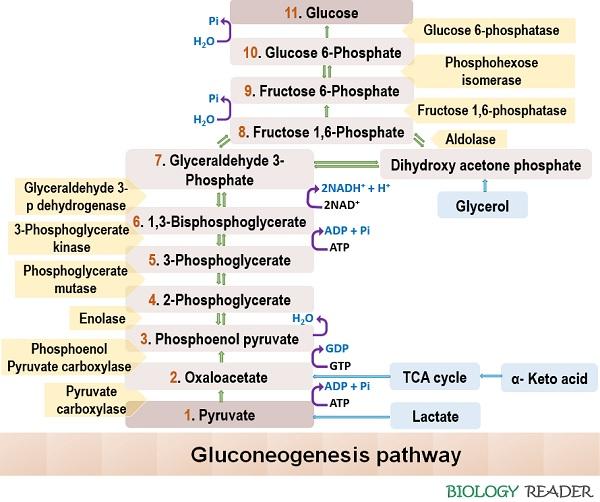 Where does Gluconeogenesis Occur

The process of neoglucogenesis takes place inside the liver, cortex of the kidney and enterocyte cells of the small intestine. Most of the gluconeogenesis steps occur inside the cytosol than in mitochondria.

Step-1: Conversion of pyruvate into phosphoenolpyruvate

It is the first reaction that bypasses an irreversible reaction of glycolysis, mediated by pyruvate kinase. The transformation of pyruvate into phosphoenolpyruvate includes two series of steps: 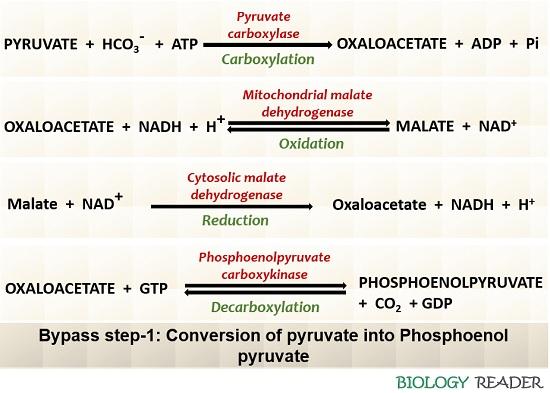 Carboxylation of Pyruvate into Oxaloacetate

Pyruvate carboxylase mediates the transformation of pyruvate to oxaloacetate by adding one carbon dioxide molecule. An enzyme (pyruvate carboxylase) was first discovered in 1960 by a scientist named Merton Utter.

Pyruvate carboxylase is a mitochondrial enzyme that allows the pyruvate present in the cytosol to enter the mitochondrial matrix via an association of MPC-1 and MPC-2 complexes.

Decarboxylation of oxaloacetate into Phosphoenolpyruvate

Then, malate moves beyond the inner mitochondrial membrane through the malate aspartate shuttle and malate α-ketoglutarate transporter. In a cytosol, malate reoxidizes into oxaloacetate by an enzyme (cytosolic malate dehydrogenase).

The decarboxylation of oxaloacetate into phosphoenolpyruvate needs a high energy ATP molecule and the presence of Mg2+ and Mn2+ ions. This reaction is reversible under normal cellular conditions.

It is a third step, which bypasses an irreversible reaction of glycolysis, catalyzed by an enzyme hexokinase. On the contrary, glucose 6-phosphatase promotes this reaction in a gluconeogenesis cycle and dephosphorylates glucose 6-phosphate into glucose.

Glucose 6-phosphatase is a protein complex that resides within the membrane of the endoplasmic reticulum. It consists of an active catalytic site and a transporter complex.

The active catalytic site mediates the release of glucose in the lumen of the endoplasmic reticulum (not cytosol) by the transporter complex “glucose 6-phosphate translocase or T1”. Glucose 6-phosphatase is dependent on Mg2+ ions that catalyzes the last step.

The glucose molecule formed after dephosphorylation of glucose 6-phosphate is shuttled into the cytoplasm by the glucose transporters of the endoplasmic reticulum.

All the intermediates of the glycolysis and tricarboxylic acid cycle provide a substrate for neoglucogenesis. It includes substrates like glycerol, lactate, glucogenic amino acid etc.

It is a product formed due to triglyceride hydrolysis in the adipose tissues and transferred to the liver via blood. Glycerol is an intermediate substrate, which produces glucose solely in the cytosol. It enters the cycle by the two sequential steps: 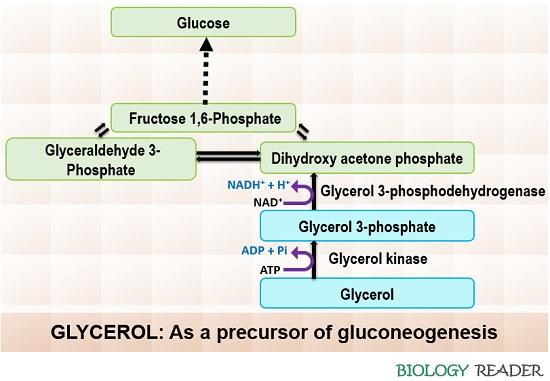 Glycerol kinase is an enzyme found in both the liver and kidney that undertakes the phosphorylation of glycerol into glycerol 3-phosphate by using ATP.

It is a product formed as a result of anaerobic glycolysis in the skeletal muscles and erythrocytes. Lactate is transferred from the muscles to the liver via blood. It reconverts into pyruvate inside the liver and later undertakes the production of glucose through gluconeogenesis. 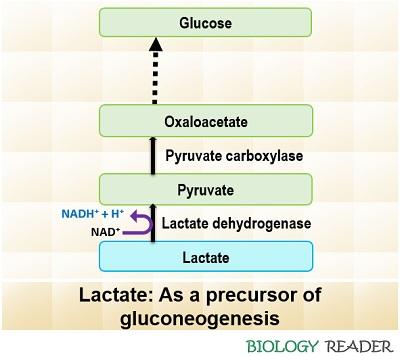 These are derived by the hydrolysis of tissue proteins. Glucogenic acids like α-ketoglutarate, Succinyl Co-A, fumarate, oxaloacetate and fumarate are the only precursors, which can produce glucose. There are two entry points, namely pyruvate and oxaloacetate, through which the glucogenic amino acids can enter the neoglucogenesis cycle. 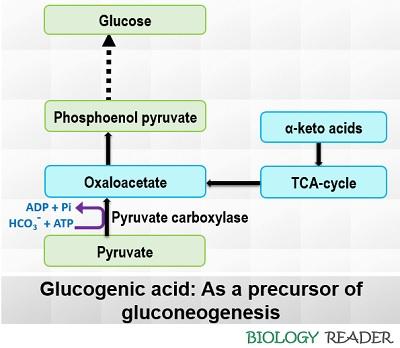 The regulation of gluconeogenesis includes the following factors:

It is a kind of reciprocal regulation, which regulates the transformation of pyruvate to PEP. Acetyl Co-A accumulates in the liver as a result of excessive lipolysis in adipose tissues. When acetyl Co-A concentration is higher, it inhibits the glycolytic enzyme phosphate dehydrogenase activity and stimulates the pyruvate carboxylase activity.

Thus, the high level of acetyl Co-A influences the gluconeogenesis cycle. It can regulate the pathway both positively and negatively.

It is a kind of hormonal regulation secreted from the α-cells of pancreatic islets when the blood glucose level in a body starts decreasing.

Glucagon regulates the conversion of fructose 1, 6-biphosphate to fructose 6-phosphate or favours the process of gluconeogenesis by the following two mechanisms:

It is a kind of substrate-level regulation, which regulates the conversion of glucose 6-phosphate into glucose. Substrate like glucogenic acid influences the process of neoglucogenesis at the time of decreased insulin level. When the concentration of insulin decreases, the muscle protein metabolizes amino acids during gluconeogenesis.