The shape, size and arrangement of bacteria are easily identifiable in wet mount method, but the bacterial motility becomes difficult to study as the microbial suspension in the well of cavity slide is pressed by the coverslip. Light microscopy makes the use of wet mount method, smear preparation, heat fixing and stain films to make the organism visible to us.

Thus, a hanging drop is a kind of wet-mount method that uses inoculum of bacteria from the liquid broth. It is an important tool to determine the intrinsic movement of the microorganisms, and that’s why used to test the motility of different organisms like bacteria, filamentous fungi and yeasts. All the bacterial cells will show erratic motion, including both motile and non-motile forms under the microscope, which we call as Brownian motion.

But, the self-propulsion in bacteria is identified by either of the following mechanisms like flagellar, gliding, corkscrew and bending type of motion. In hanging drop motility testing, we can see numerous immortalized cells towards the edge of fluid, under the microscopic observation. In this article, we will be discussing the definition, procedure, notes to be considered, applications, advantages and disadvantages.

Hanging drop method is the traditional method for examining the cell motility and morphology by taking the living microorganisms from the liquid media. The hanging drop method works on the principle of wet mount preparation, as it involves subjection of living microorganisms into a drop of fluid. It makes the use of glass slides with one small concave depression towards the centre, a coverslip, petroleum jelly, microbial suspension and sterile inoculating loop. It was first discovered by a scientist named Robert Koch in the year 1878.

Previously, a hanging drop technique was used to examine the Nocardia sp. on liquid paraffin droplets. On further study, the method has been used extensively to demonstrate the bacterial morphology and motility. Later, considering the large drop size in the hanging drop method, scientists started using the micromanipulation technique to get control over the drop size.

The examination of microorganisms in a hanging drop method involves the following protocol: 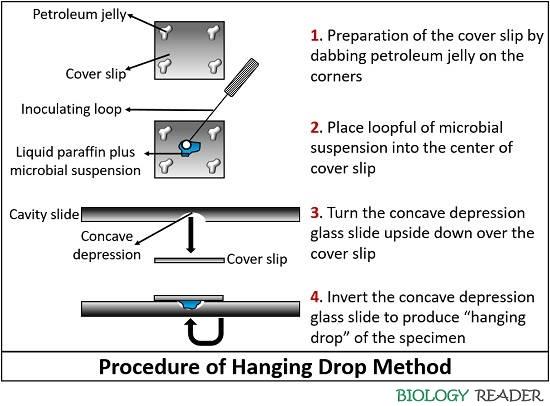 The morphology of spiral bacteria can be explicitly studied in hanging drop method, as its shape becomes distorted in the heat fixing method. Spiral bacteria like spirochetes need to be examined in a living state, and there shape and arrangement can be well studied under a dark field microscope.

Bacterial motility or mobility can be well studied by employing a hanging drop method, in which a bacterial cell can freely move in the liquid medium.

The cytological changes that occur during the cell division, spore formation and germination of the bacteria are the events that need to be studied in a living condition or hanging drop method. The cytoplasmic inclusions, including vacuoles, granules etc. are easily noticeable by using this method.

Therefore, we can conclude that the hanging drop method is the best way to study the different events of the organism in a living state, the mobility, shape and arrangement of the bacterial cells. Hanging drop method is a kind of motility test, which is performed by taking the microorganisms from liquid media on the glass slide having indentation towards the centre.