Bacterial shape and arrangement vary from species to species. Bacteria exist in many forms, but the most common types are bacilli, cocci and spirilla. Some bacteria are pleomorphic, i.e. they live in variable shapes. Bacteria are prokaryotic cells as they have a primitive nucleus, i.e. bacteria devoid of a nucleus and a nuclear membrane that surrounds the genetic material.

Bacteria are the unicellular structures, i.e. they are minute enough, that we could not see them through the naked eye. Through culturing and isolation of bacteria, you can examine the bacterial shape and arrangement by methods of staining and microscopy.

Through microscopic observation, we can determine the morphological or physiological characteristics of bacteria based on bacterial shape and arrangement. In this lesson, we will discuss the size range, common shapes and different arrangement of bacteria.

The bacterial size ranges from 0.5-1.0 µm, which you can observe in the highlighted portion of the image below. The spherical shaped bacteria have an average diameter ranging from 0.5-2.0 µm, whereas the rod shaped bacteria have an average diameter of 0.25-1.0 µm. Some bacteria possess a diameter of 80 µm and a length of 600 µm, which we can see through the naked eyes. For example, Epulosiscium fishelsoni.

Because of bacteria’s small size, their structure becomes more complicated. Even though of small size, bacteria can communicate with the other microorganisms through a mechanism called “Quorum sensing”. Bacteria can also function as a multicellular population rather than an individual organism.

The rigid cell wall decides the shape of bacteria. Generally, there are three common shapes of bacteria, namely, cocci, bacilli and spirilla. 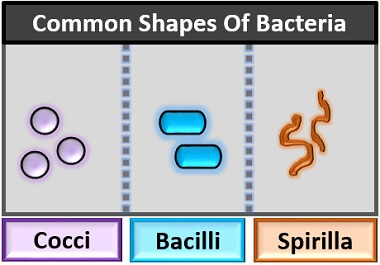 It is a plural form, which represents a large number of bacteria possessing a spherical shape. Conversely, coccus is a singular form, which represents a single spherical-shaped bacterial cell. Cocci are small, round and slightly flattened in shape. They can appear singly or in pairs, chains, groups, clusters etc.
Examples: Staphylococcus aureus, Streptococcus hominis, Neisseria gonorrhoea etc.

It is a plural form, which represents a bacterial population possessing a rod shape. Oppositely, coccus is a singular form representing a single rod-shaped bacterial cell. Bacilli are small, cylindrical and elongated in appearance. They can appear either singly or in pairs, groups etc.
Examples: Lactobacillus sp, Salmonella sp, Escherichia coli etc.

It is a plural form, which represents a large number of bacteria that possess a helical shape. whereas spirillum is a singular form that represents a single helical-shaped bacterial cell. Spirilla are small, curved and coiled in appearance. They usually appear singly.
Examples: Treponema pallidum, Spirillum minus, Chlamydia trachomatis etc.

Other forms of Bacteria 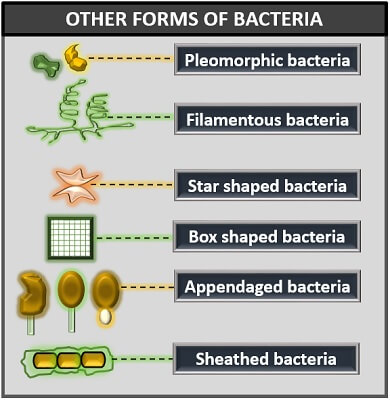 The arrangement of bacteria defines the position and organisation of bacteria that strongly depends upon the type of cell division. The bacteria are grouped into four types based on bacterial cell arrangement and cell number.

The arrangement of cocci is more complicated than the bacilli. Cocci cells can remain attached after the cell division. In cocci, cell division can occur in many ways like in one plane, two planes, three planes or randomly. They exist in various forms based on the arrangement and cell number: 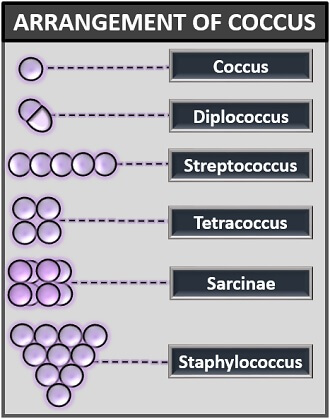 The bacillus cells remain attached after the cell division. In bacilli, cell division occurs in one plane. They exist in various forms based on the arrangement and cell number: 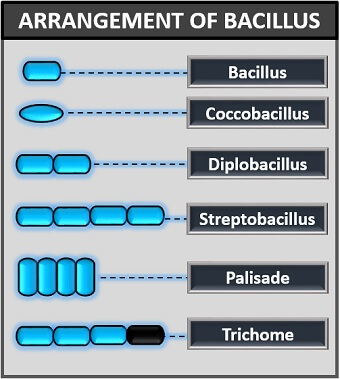 The spirillum cells have a rigid spiral structure and they usually exist singly. In the spiral bacterial cells, twisting occurs within the cell, which eventually gives it a helical shape. They are of two types, based on arrangement and number: 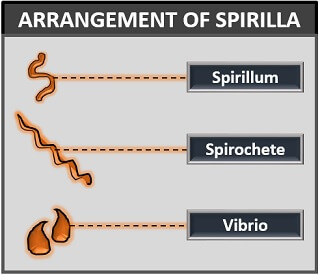 We can conclude that bacteria are tiny creatures that exist in various sizes, shapes and organization depending upon the organism’s type, growth pattern, cell division and many other factors. The size, shape and arrangement of the bacteria can be studied using different microscopy and staining methods.