The medulla is the deepest layer of hair seen only in thick hairs. The cortex is the central layer of the hair shaft, giving strength, shine, colour and texture to your hair.

The cuticle is the thin, colourless outermost layer of the hair shaft which shields the vulnerable cortex and medulla. Hair has two distinct regions.

One is the hair shaft, a portion protruding above the skin surface. The second is the hair follicle, a part of hair found under the skin. This post explains the meaning and three distinct layers of the hair shaft.

The hair shaft is the hair segment visible above the skin’s surface. The pencil’s structure is a good analogy for understanding the hair shaft’s layers. 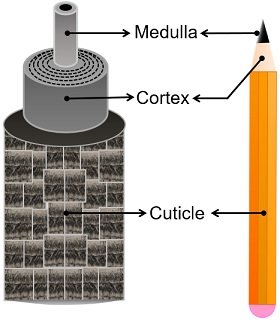 There are three distinct layers of hair, as illustrated in the picture below. This particular section will enlighten you about each layer of hair in detail, along with the pattern and role of these layers in human hair. 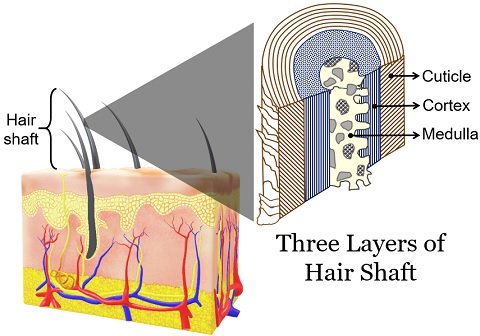 It is a transparent outermost layer of dead cells. The cuticle has 5-10 thin layers of non-pigmented flattened keratinized cells.

It has a complex structure, made of scale-like cells overlapping like roof tiles or fish scales. Humans have fine scales in the cuticle layer. You can also feel the hair texture by moving your fingers over a strand of hair.

If you move your fingers from the root to the tip, you will feel the smoothness or uniformity in the hair. But, the texture of the hair strand is less uniform and rough when you do the reverse. Intercellular lipoprotein cements the scale-like cells in the cuticle.

A healthy cuticle looks smooth with intact scales. The smooth cuticle cells reflect most of the light and give a natural shine to your hair. Also, it controls the water content of the hair fibres.

A healthy cuticle shields the inner layers of the hair shaft, i.e. cortex and medulla, from the adverse effects of chemicals and pollutants. A healthy cuticle gives a smooth texture to your hair.

The damaged cuticle looks jagged like a piece of rope that’s been unravelled. Extensive use of dyes, incorrect brushing, blow drying etc. can damage the cuticle layer.

Any damage to the cuticle unravels the cortical cells, leaving the inner layers exposed and allowing essential moisture or oil to strip away. A damaged cuticle will make your hair dull, tangle, brittle or frizzy.

Sebum from the sebaceous gland under the skin coats the hair cuticles by preventing hairs from drying. Thus, healthy cuticles mean healthy hair.

There are generally three patterns of the cuticle. 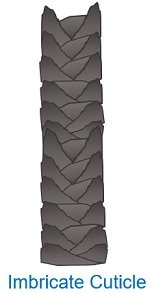 It is a translucent intermediary layer of the hair shaft between the cuticle and medulla. The cortex is the thickest region in hairs.

The irregular cells in the cortex are called cortical cells that measure two μm to 5 μm in width and over 50 μm in length. They lack cell organelles and are connected via intercellular lipoproteins.

The cortex forms the largest portion (90%) of hair, which contains pigment granules, proteins and structural lipids.

Pigments: In humans, melanin pigments are molecules that are denser near the cuticle. Melanin is the pigment that gives a natural black colour to hairs. In contrast, the absence of melanin makes hair grey or white. The production of melanin pigment varies from person to person. For this reason, people have different hair colours.

Macrofibrils: Cortical cells also enclose longitudinally oriented macrofibrils of diameter between 0.1 μm and 0.4 μm. Macrofibrils are structures that originated from the combination of hundreds of microfibrils.

Microfibrils: Each microfibril has eleven protofibrils bonded and twisted like a telephone cable. Protofibrils represent the organization of the keratin fibres.

Keratin: It is the hair shaft’s most significant protein, giving strength and elasticity. Keratin proteins in hair have a secondary structure, in which H-bonds and disulphide bonds hold the polypeptide chains. They lie parallel to the length of the hair shaft.

Thus, the cortical layer or cortex surrounds the medulla and is protected by the outermost cuticle.

It is also called the medullary canal, pith or marrow of the hair. The medulla represents the innermost layer or core of the hair shaft. It is a central column having round cells and surrounded by the cortex layer. In humans, the medulla generally appears amorphous.

Humans may have fragmented, continuous or interrupted medulla patterns. 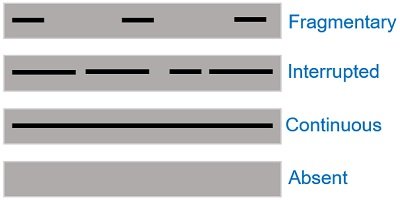 Generally, people with thicker or coarser hair types have the inner medulla, not the finer hair types. This layer hardly contains pigment granules or not at all.

A medullary canal is a soft and thin core consisting of transparent cells and air spaces. Cells in the medulla are loosely packed.

There are one or two rows of anucleated cells in the core of the hair shaft. Thus, the medulla resembles a narrow canal running along the intermediary layer of the cortex.