Phytochrome in plants exists as a soluble protein pigment, which carries out photomorphogenic growth. It is present almost in all eukaryotic plants and first discovered by a scientist named Sterling Hendricks and Herry Borthwick in 1940-1960.

Warren Butler gave the term phytochrome. In 1983, Peter and Clark were the two scientists who introduced chemical purification of the phytochrome.

The gene sequence of phytochrome was reported in the year 1985 by two scientists Howard and Peter. This post describes the definition, features, structure, types, biosynthesis and functional role of the phytochrome.

Phytochrome refers to the photoreceptor or photomorphogenic pigment, which absorbs red and far-red light wavelengths to induce photomorphogenesis or a light-induced growth and development in various plants, bacteria etc.

It merely refers to the light-activated switch, which turns on after absorbing the red light and turns off by absorbing far-red light. Phytochrome is the photosensitive proteinaceous pigment having a protein component and prosthetic group.

Structure: Phytochrome consists of two elements; a protein part (apoprotein) and a prosthetic group (phytochromobilin or chromophore). Neither apoprotein nor chromophore absorbs the light alone, i.e. both should be present in combination to form a complete protein or holoprotein.

Structural conformation: It exists in two disparate structures like PR and PFR, in which a former is a cytosol associated, and a latter is membrane-associated. PR and PFR are the two forms of phytochromes that are generally photo-interchangeable.

Types: There are two classes of phytochrome protein, namely type-I and type-II. PHY-A, B, C, D and E are the phytochrome genes found in dicots, whereas PHY-A, B, C are common in monocots.

Phytochrome has a “dimeric” existence. It consists of homodimers, each of molecular weight 125 kDa. The conformation of phytochrome comprises two primary structural elements. 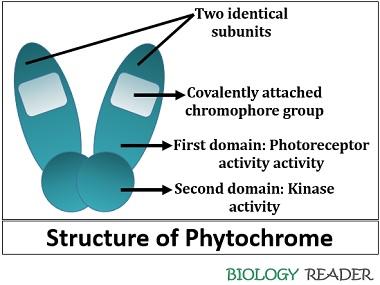 Phytochromobilin: It is a photopigment that appears as a linear tetrapyrrole structure. Phytochromobilin mainly absorbs red or far-red light at different wavelengths.

Apoprotein: It comprises two domains, one showing the photoreceptor activity and the other showing the kinase activity. 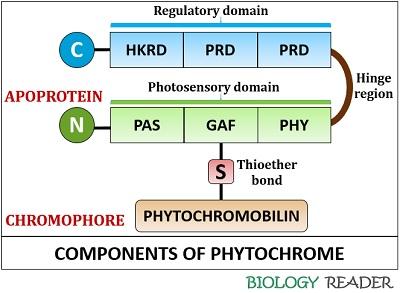 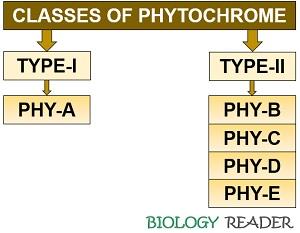 Biosynthesis of Phytochrome in Plants

By the transcription of the nuclear genome into mRNA, a protein part (apoprotein) forms. Then, the 80-S ribosome translates the mRNA and synthesizes PR phytochrome in the cytoplasm. A chromophore pigment leaves the plastids and enters the cytosol.

Then, the association of the chromophore pigment and phytochrome protein occurs via bilin lyase activity of the GAF-domain through thioester linkage. Thus, the combination makes a holoprotein.

PR is the inactivated state of phytochrome, while PFR is the activated state. Activated phytochrome works as a serine-threonine kinase, which phosphorylates serine residue towards the hinge region.

Then on the phosphorylated region, the nucleolar organization signals get exposed, by which the PFR enters the nucleus and converts into a more stable phytochrome through protein phosphatase that removes the phosphate group.

Functional Role of Phytochrome in Plants

Initiation of Transcription: Phytochrome triggers the exit of cop-1 or constitutive photomorphogenic 1 by activating three transcriptional factors like HF-1, LAF-1 and HY-5 in the presence of red light when the PR converts into active PFR.

Cop-1 is basically an E-3 ubiquitin ligase. Oppositely, the cop-1 remains inside the nucleus as an inactive form in darker conditions. It also targets the HY-5 transcriptional factor for the degradation by the 26S proteasome or inhibits the transcription.