Plant Growth Regulators are the chemicals derived naturally by the plants, which function is to regulate the length and thickness of plants. PGRs are molecules that can influence or inhibit plant growth.

It is also called “Phytophormones” that are generally active at very low concentrations. The PGRs are sometimes referred to as a natural regulator, as these are produced by the plant itself, and sometimes refers to as a synthetic regulator that is found naturally in the plants.

Plant Growth Regulators can define as the organic molecules that perform a pivotal role in different plant growth processes like tropism, elongation, and apical dominance. As PGRs are produced by the plants, these are also termed phytohormones or plant hormones that regulate the physiological activity of plants by either stimulating or terminating the plant maturation. 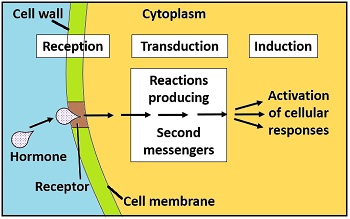 Therefore, phytohormones simply control the growth behaviour of plants. The phytohormones vary in their chemical structures but have similar physiological effects. Abscisic acid, auxin, cytokinins, ethylene and gibberellins are the five major classes of PGRs.

Plant growth regulators have varied chemical compositions (ethylene, terpenes, and carotenoid derivates etc.). Based on the action of phytohormones on the growth behaviour of plants, there are two classes of PGRs: 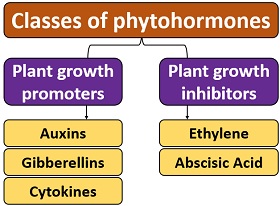 It was discovered first among the other PGRs, which are synthesized by the plant and have similar physiological effects to Indole-3-acetic acid (IAA). It first came into use by Charles Darwin while he was performing experiments on canary grass coleoptiles. After his experiment, he concluded that auxin promotes shoot elongation and tropic growth towards light.

It produces from the apical region of stems and roots. These plant hormones possess both natural and synthetic sources. Indole-3-acetic acid and indole butyric acid are the natural precursors, whereas naphthalene acetic acid and 2, 4-dichlorophenoxyacetic acid is the synthetic precursors.

It is produced by the young tissues of the shoots, in the developing seeds, rarely by roots and sometimes by the leaves. There are nearly 100 gibberellins known so far. It shows acidic behaviour and is denoted as GA1, GA2, GA3 etc. GA3 (Gibberellic acid), among which GA3 was the first to be discovered.

It is also called a cytokine. These compounds are more or less similar to the adenine (aminopurine) that stimulates cell division.

These chemicals inhibit plants’ growth and development. PGIs promote dormancy and abscission in plants. An example is an abscisic acid.

Ethylene is a gaseous compound having the simplest chemical structure. It has effects like abscisic acid.

Therefore, we can conclude that the plants also require a few chemical substances that can regulate their growth and physiological functions along with oxygen, water, sunlight etc. The plant growth regulators are simple organic molecules that possess different chemical compositions and molecular structures. They are well known for their regulatory functions, where they can stimulate, retard or inhibit the growth rate in plants.