They represent the group of non-vascular lant plants, which include liverworts, mosses and hornworts. One characteristic feature of bryophytes is that they possess unbranched sporophytes. This post describes the meaning and two different phases in the life cycle of bryophytes.

Bryophytes are terrestrial and non-vascular plants that grow in damp or humid habitats and reproduce via spore generation instead of seed germination. Mosses, hornworts, and liverworts are the three common plants that come under the bryophyte group. There is one thing common among the non-vascular plants (mosses, liverworts and hornworts) that all possess small leaves. However, bryophytes lack flowers, wood and a true root system.

Bryophytes reproduce through both asexual and sexual means. They reproduce asexually via gemmae formation or fragmentation. Conversely, their sexual reproduction occurs via two different types of spores that form anthrezoids and archaegonia.

Some bryophytes only undergo asexual reproduction or cannot achieve fertilization due to loss of functional sexuality.

It exists in two phases that are explained below: 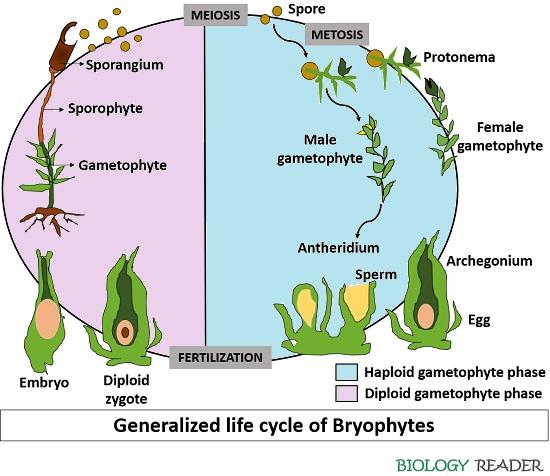 This stage begins when the dormant spores of bryophytes form a germ tube. Spores first develop a green and filiform complex called a protonema. Then, the protonema goes through several maturation phases, after which it starts developing rhizoids and aerial filaments.

Red light and kinetin stimulate the cells, promoting the growth of shoots, which later enlarge and modify into mature gametophytes. Then, gametophytes develop a specialized reproductive structure (gametangia) at the apex of the main shoot, which holds the gametes (eggs and sperms).

Before fertilization, anthrezoids of the male gametangium of the same or different plants go down to the archaegonium via water droplets. There is a unique feature where both the gametangia of bryophytes are enclosed by a sterile layer of non-reproductive tissues that is absent in algal gametangia.

It begins with the fusion of a biflagellate sperm and an ovum inside the archegonium. After fusion, nuclear and cytoplasmic exchange occurs between anthrezoids and archegonia, resulting in the formation of the diploid zygote (2n), and the process is called fertilization.

In bryophytes, a biflagellate sperm goes down to the archegonium via a passage of water film on the plant surface. A diploid zygote in the archegonium develops into a multicellular diploid embryo by undergoing repeated mitotic divisions. An embryonic sporophyte highly relies on the gametophyte that provides nutrition sources like sugars, minerals, etc.

An embryonic sporophyte differentiates into three distinct structures, namely foot, stalk, and capsule. The foot provides a base to anchor the young sporophyte. A stalk appears as a slender filament that attaches to the sporangium and originates from the foot cell.

A spore capsule appears as a tight cap (calyptra) that comprises a layer of sterile protective cells around an embryonic sporophyte at the opposite end of the foot. A spore capsule encloses a sporangium sac that holds the heterospores, which function as sexual dispersal units. The spore-producing cells go through meiotic cell division to form spores (haploid).

The spore formation occurs when the foot cell uptakes nutrients from the gametophyte and conducts them to the spore capsule via a long stalk or seta. A spore capsule comprises a layer of sterile cells and a hygroscopic layer of elaters that absorbs moisture from the surrounding.